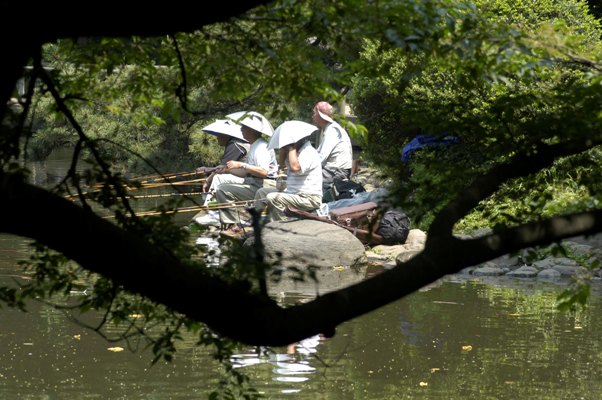 Ayumi squints through an opening in the branches at the fishermen on their rocks beside the pond. Without her glasses she cannot be certain it is really him. At 11:00? On a Tuesday? No…no, no. Hideo is at work. In the blue suit she picked up from the dry cleaners yesterday, with his pens and stacks of inventory sheets before him on his desk, and the dried-flower paperweight she gave him when he was promoted to General Auditor for the Thermal Power Department.

But that brown satchel… No, she shakes her head, half the men in Tokyo have the same one. At least they did until the Samori Briefcase came out last year and everyone decided the satchel looked too provincial. She leans forward, brushing her forehead on a low-hanging branch, trying to see the faces of the men beneath their umbrella-hats. Does Hideo even have one of those hats? Didn’t Naoki give him one a few years ago as a joke? Ayumi clucks her tongue. It looks like something her son would have found in some gag shop in Harajuku. But Hideo didn’t find it funny. She distinctly remembers him saying in his curt way, “And when would I use this?” Typically, Naoki just laughed.

She sits down to think on the half-hidden bench next to the tree trunk. She has been married to Hideo for forty-two years. She has stood at the front door of their apartment and bowed him goodbye every single day – minus the one week after she gave birth to Naoki – since they came home from their honeymoon. She has watched his face each morning, watched him prepare himself for a difficult meeting, watched him step lightly, flushed and excited for the promise of a job well done, watched him march down the hallway after a late night argument with Naoki, tired but resigned. She would know if something had changed.

The fishermen don’t appear to be talking, but Ayumi strains an ear. She would recognize Hideo’s voice. But what is she even doing? It can’t be him. Just another sixty year-old man with the same pointy elbows and straight back. The same Tetsuno Satchel with a broken brass buckle. She breathes in the damp green of the fresh leaves and flowers. Etsuko’s husband was fired. Kumiko’s husband quit his job. She ticks off a list of other friends, women in their early sixties like herself, whose lives changed in the space of an afternoon.

She folds her handkerchief across her lap into a neat little square. And what if it did? She knows what she would do. She’s an excellent homemaker. Didn’t she surprise Hideo for his fortieth birthday with a trip to Sapporo on money she saved, slowly and secretly, from her limited household budget? She takes a pleased gulp of air and stuffs her handkerchief back into her purse.

The fishermen are laughing now and Ayumi stands suddenly. She stares intently through the opening in the branches. What if she whistled and got the men to look in her direction? If he did look over, she’d be sure. But no…that laugh. She curses her forgetfulness. If only she had her glasses.

She decides not to make any noise. It isn’t worth the risk. And, in case it is Hideo, which Ayumi is certain now that it is not, it would be very embarrassing to be caught in the park like this, just before lunch, strolling about like she doesn’t have anything better to do. And worse, caught spying like she’d been suspecting something was wrong with Hideo’s job.

Even if it isn’t him.

She backs away from the tree, steps across the roots and rocks to the little path she had been on when she saw the hidden bench beneath the great tree and the dark cool space it sheltered. Once on the path, she stands perfectly still. Waiting. Listening. She can no longer see the fishermen, but once she moves beyond the tree they will be able to see her. She puts her hat back on and her sunglasses. She won’t embarrass these men by staring at them, for making a big deal of their idle fishing while other men, employed men, are off at their jobs.

Ayumi takes her shopping list from her purse and adds one item. Hideo’s walking-to-work shoes have gotten a little worn. All the rain these past few weeks, the streets are an endless maze of puddles and mud. She’ll surprise him with a new pair. He’ll be pleased to see she’s still paying attention. After all these years, she’s still looking out for him.

Her feet keep the shoe shape,
Lifted higher —
Arches of young girls’ killer heels.
Hers dangle, sensible,
From two fingers, one thumb,
Her other hand holds the branch.
He is fishing?
She tip-toed waits and watches,
Head tucked turtlish,
Tortoiseful.
She is not where she’s expected.
But if this, what else?
She crouches, adjusts, calves tight,
Thighs whispering
Their nylon words. They gossip.
There he sits with bait and hooks
And men who aren’t friends,
His briefcase on the bank.
How could he? Keeping secrets.
Forty years, she’s bowed the day’s good-bye,
Bento box outstretched and dangling
From two fingers, two thumbs.
He’d need no noon-caught fish.
But if… then?
Pocket the knowledge? A toxin.
Accuse. Explain. Accuse. Excuse?
He laughs. It’s not his laugh.
She un-crouches, un-arches,
Releases the branch,
Re-dons her sensible shoes and lets
The loud nylon conversation
Commence, singing
Her scurried
Retreat.

Note: This triple piece, a bit like an interpreter’s game of “telephone”, is somewhat disingenuous, but well-intended and meant to highlight one potential danger in the process of translation—the helplessness of the object being translated. In essence, a translation springs from the mind of the translator, and in this case from two “translators,” each using a different medium to create a new version. So no matter the translator’s understanding of and sympathy with the original piece, the translator has a potentially problematic level of control over the end result. This is why translation will always be a retelling and never a completely faithful copy. For some, this inevitability creates too much tension and becomes alienating. A translation can never be true, one might say, so why bother engaging with it at all? But for others, this represents a possibility. A willingness to accept that a translation remains open by its very nature, no matter its apparently seamless mirroring of the original, and within that openness lies interpretation—one of the most exciting truths of literature.

Margaret Fletcher Saine studied photography at the University of Virginia. She held an internship at the National Geographic Magazine in Washington, DC. In 2000, she moved to Tokyo where she was a finalist in the Japan Times Photo Competition. She currently lives in Lausanne, Switzerland, where she has studied with Italian photographer, Alex Subrizi. Her work will be part of a photography exhibition to be held in Lausanne in April.

Nancy Freund is an American-British novelist and poet with a B.A. in English/Creative Writing and an M.Ed. from UCLA. In addition to writing and teaching, she’s been in editing, publishing, book marketing and publicity. Involved with the University of Iowa Summer Writing Festival, London’s Women in Publishing and the Geneva Writers’ Group, she currently lives in Switzerland.
+++