What We're Gonna Do

As a science student, I was inept on a good day. It wasn’t always thus; as a kid I had subscriptions to OMNI and Science Digest and devoured science fiction by the stack. The culmination of my scientific career, the closest I’ll come to Swedish laurels, was in seventh and eighth grade. In grade 7, I built all manner of paper airplanes out of balsa and rubber cement and sent them soaring through the yard of David Harrison, my partner in aeronautical crime, meticulously tallying the duration of their flights and their distances and likely getting a contact high off the rubber cement fumes that lingered in the room. In eighth grade I assembled clocks out of different materials, ranging from a jar filled with honey that rolled down a plank to the Chinese water clock, which involved multiple drips and dowels—basically an overly simple Rube Goldberg device. A couple of my classmates built a hovercraft, though I never actually saw it do any hovering and to this day I’m a bit skeptical. But, I mean, a hovercraft! In high school, I had the choice of bio or earth science as a freshman; earth science was the one you took if you didn’t want to work too hard because reputedly you could get extra credit for scraping a couple of rocks together so long as you could talk about it with a straight face in front of the class. When I did get around to bio the following year I could barely stay afloat, and chemistry was even more disastrous. I was like a tourist whose luggage and wallet are swiftly parted from him upon touching down in another country. The first concept Sullivan discussed was significant figures, and while I tried to make sense of that, the second concept, that of the “mole,” was already flummoxing me. I could see the concepts lining up in the distance, waiting to take their swings at me one by one. By day three I was down for the count. It was the last science class I would take for many years—at my liberal arts college, none were required, and while I lived with people who were checking out library books like that massive, triple-rubber-banded tome, The Biology of Bats, it would be literature and philosophy for me from there on out.

There was this one thing about Sullivan, though. Every other Friday we would have a test, which I’d walk out of looking like a cartoon character who’d been on the receiving end of Acme’s finest incendiary products. But on alternate Fridays, for about twenty minutes at the end of class, Sully’s voice would soften and dip, its gentler frequencies coming to the fore. He’d step away from the chalkboard, swarming with equations and molecular gobbledygook, and he’d tell stories. He’d had this tradition for over a decade now, so some of the stories he’d already shared dozens of times, and thus had the quality of classics, while others seemed fresher, more recent. There were stories of tollbooth antics and insomniac roommates. These were stories without morals or solutions, and to me and, I suspect others, they were the salve that healed our chemistry-induced wounds. One memorable tale was that of “Purple Cloud,” an old college classmate of Sullivan’s named Milford Finney, who had failed to don the proper headgear in an experiment that went awry, and thus walked out of the lab purple from the neck up, a hue he bore like the mark of Cain for the remainder of the semester. Did we not try in those pre-Google days to contact Milford Finney, if only to hear his side of the story? Of course we did, and probably best for all concerned that we failed (though it was close). Sully’s stories, even when they involved science as with Milford, were really about foibles and the larger world, yet because they were being told by a science teacher they seemed to belong to and in the same universe.

Besides Sullivan’s stories, there were two writers who kept me intrigued by science: Primo Levi, whose masterful Periodic Table I read and reread several times, and Italo Calvino, whose Cosmicomics and T Zero were and remain close to my heart. Levi builds his chapters around chemical elements; in the opening chapter, titled “Argon,” he uses the element as a springboard to talk about his aunts and uncles, who like the gas “were inert in their inner spirits…static, [bearing] an attitude of dignified abstention, of voluntary (or accepted) relegation to the margins of the great river of life,” such as his Uncle Bramín, who fell in love with a peasant girl’s ankles and when things didn’t work out became bedridden for twenty-two years. For Calvino, too, in the Cosmicomics, science seems to be a launching pad for talking about any number of human phenomena, from the comedic misses of communication in “A Sign in Space” to the vagaries of probability in “How Much Shall We Bet”; he churns up, in his own words, “a positive delirium of anthropomorphism.” Calvino’s stories inflamed my imagination. Years later, I’d start to become fascinated by the brain and neuroscience and animal behavior and recognize that these fields yielded a fascinating vantage point on humans, too. There are a few things I admire in science—the emphasis on close observation, on getting out there and doing stuff, interacting with the world, marveling at it, and the things Calvino talks about in his Six Memos for the Millennium: visibility, multiplicity, exactitude, etc.

But these days mostly I am drawn to science because it is mind-blowing, because the universe itself is possessed of the most profligate, stirring imagination I’ve ever encountered. Consider the black hole. Calvino’s pretty amazing, and he can work wonders with the concept of how “[t]he more distant a galaxy is, the more swiftly it moves away from us,” but he never came up with anything half as jaw-droppingly outlandishly supernal as a black hole. And they really exist. Game, set, match. Similarly, nature is the most striking, unabashedly sexy fashion designer out there. Exhibit B: this fish I just saw last week. 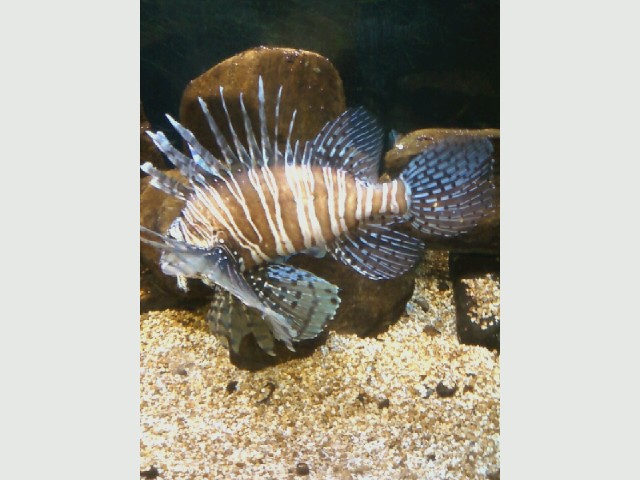 And check out one of the coolest landscapes I’ve ever laid eyes on, the Chiracahuas in southern Arizona, with that giant oversized about-to-teeter head, i.e. a set design to rival any in theater history.

How about a fact that ravens will team up and one will play at being lame in order to fool another creature that is guarding food to attack it, thus freeing up the snack? Or the brain studies that show that when we experience disgust toward another person, the same part of the brain appears to be active as is the case when we are physically repulsed by, say, a fetid, maggot-ridden piece of meat?

My scientific aptitude hasn’t really increased over the years. I no longer have to take tests, and I’m free to indulge it in only the ways I wish to, and none of the ways that the state or the textbook writers or testmakers decree I have to. So I bring my six-year-old daughter to the local nature center to pick up hermit crabs and with her attempt to fathom what they see with their multitudinous eyes, and together we get messy and briny, feeling nerves meet nerves as their claws skitter over my hands. I can flip through the pages of Nature for the highlight reel, as in whatever snags my attention. I can ruminate on the possible uses of studying shadows, and fabricate fields like umbrology, the study of shadows, which seem as though they should exist even if they don’t. In short, I can play with science as I fling around ingredients and spices on those occasions I cook, or play with words, characters, and formal structures and ideas in my fiction. If science is itself a fiction, then for me it has become a necessary one, more generative than reductive, more skin and solar flare than cosine and calculation. This month I’ll bring to you some writers who are playing with science in their work, but also, of course, with things other than science. I’ll bring you a couple of interviews with writers who roughhouse along the fence that artificially divides science from fiction. I’ll try to bring you some of my own recent experiments. And in so doing, I hope to convince you that any rift between the two is absurd, that science ought to be no more inimical to literature than religion or dreams or myth or painting or sports or music or cults or inebriation of all varieties—in short, any of its other regular paramours.