The Woman on the Sidewalk

I saw one of those women the other day. You know the kind I’m talking about. You’re walking down the street, on the sidewalk, maybe cobblestone, and there she is walking towards you. Her clothing is impeccable, alluring, dangerous. Denim, buttons, and curves. Thick, wavy, raven hair. Not trashy in the slightest bit: it’s all subtext. You and she make eye contact, a little too long for strangers. She smiles. You probably turn around and watch her ass wag in her jeans as she passes by. Somehow, you run into her that evening, probably in a bookstore. You introduce yourself. The two of you talk casually. She seems impressed by your boldness, maybe your wit or charm. After all, you’re a pleasant guy who just took a chance. You end up back at your place. She undoes her buttons as you open the door, and you’ve been hard practically since you shook hands.

She fucks your brains out, rides you and grinds on you in ways you couldn’t even extrapolate from all the porn you watched growing up. She moans and whispers, and you know that your laying there and doing nothing is exactly what she wants from you. You both come like in the movies, tangled limbs and catching your breath. She stays on top and looks down at you, a sheen of sweat on her forehead. And while you’re still inside her, she asks you something strange, like if you’d hurt someone if she’d wanted you to or if you would move to a place she pointed to on a map with her eyes closed. You say yes (what else could you say in this situation?). She smirks at you. She knows you’re lying, though she doesn’t say a word. Before you realize it, she’s dressed. She kisses you at the doorway; her tongue is the perfect middle ground between coarse and slimy. You know you’ll never see her again, though you secretly hope that maybe you’ll run into her at a bookstore of café, that she’d remember how good you felt. Maybe she’d take you to the bathroom and go down on you. For days you’ll sit in bed and relive the way she moved her hips and drove herself into you over and over again. After a while, you’ll wonder if it ever really happened; it’ll seem surreal, that night when a stranger brought you to life. Eventually, you’ll convince yourself you imagined it. From a story or a movie or something.

Years later, you’ll be married and doing your wife, who pretty much just lies there and takes it, and she’ll twitch for whatever reason, readjust—maybe the blanket uncovered her foot and she was cold, maybe a kink in her stomach from dehydration—and she’ll buck her hips just so to reorient herself, and for a split second, you’ll remember the woman from the sidewalk, who practically ruined sex for you for the rest of your life. Everything from that night will pour back into you, and you’ll climax almost instantly. You’ll collapse on your wife, who’ll be pleased with herself and will hold you tightly and tickle the top of your head. You don’t really forget memories like that, moments that are signposts to your life as you know it. You suppress them.

That’s the kind of woman the woman on the sidewalk is, those soulful eyes and fuck-me-if-you-can demeanor. And in that moment when your eyes meet, you understand string theory and the multiverse. You could have a happy marriage and lose the chronic masturbation habit. You’d treat your wife right, read books together for free at Borders, and come like you mean it. She deserves that. You see all the infinite possibilities of your life unfold before you, see how every action you take, no matter how inconsequential, spawns countless alternate realities for yourself, each one a different flavor than the last. And when you keep walking, and those eyes and those legs pass by, those hinted-at breasts underneath that crimson button down shirt and that raven hair, all the dimensions save one peel away just out of reach.

This story originally appeared in Sub-Lit. 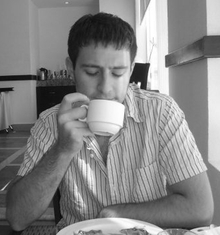