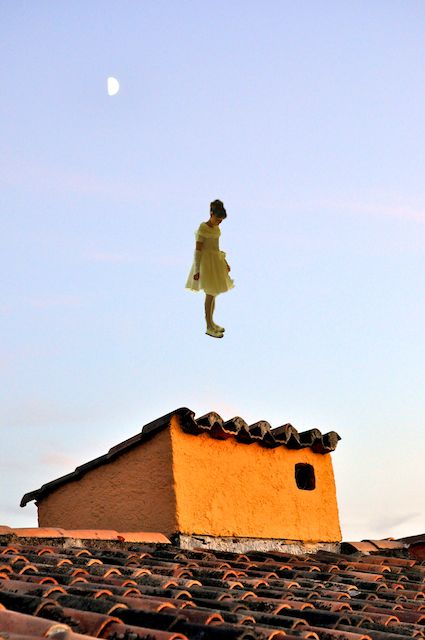 The door closes and the children are gone. Off to play in the twilight. Not children, she reminds herself. No longer children. She does not race to the hotel window, to see whether the young man already has his arm around her daughter. It does not matter if he does. Because she knows it will happen. Maybe not this twilight. But one of these tomorrows.

This evening at dinner, as the currents of conversation passed around the table, as glances were exchanged, as stories were told, as parts of stories were left untold, there was a hint of what will come to pass. She cannot shrink the distances that have begun to stretch themselves out between her and her children. She wouldn’t want to, not really, and of course part of her is impatient to see how these young beings will settle themselves up against the vast world. But she is not so naïve as to think their trajectories will not startle her, will not create little wounds she must mend in quiet. Her daughter, the oldest of her small tribe, will be the first to go.

She crosses to the window anyway, but the street is empty now. A hush is collecting around the dusty buildings as they shimmer in the setting sun. The rooftops hum with heat gathered throughout the day. She leans her head against the window, just for a second, just long enough to expel a held breath. But she raises it again; the couple is still in sight, standing near the far corner, almost invisible against the pastel buildings in their light-colored holiday clothes. The young man is a friend of the family; they have known each other since they were children. They are no longer children. She watches them hover, indecisive, perhaps deciding which café to find for an ice cream or a secret glass of wine they know the servers will not refuse them here.

The young couple turns in unison, heading off together in the direction of the water; her daughter’s long skirt flutters and flips, a pale flag against the darkening street, and then they are gone. In that wave of fabric, she sees an earlier incarnation of this almost-woman. From ten years before, when her husband’s job took them to live for a time in another country. That day, invited to participate in a fashion show, her daughter was dressed in someone else’s idea of perfect elegance. A pale yellow dress with a sewn-in petticoat and a fluffy bow at the waist. The organizers had wanted her to look like a little doll.

Her daughter had appeared so old that day. The careful makeup made a young woman out of her girlish face. She had carried herself carefully across the stage, she had not smiled. In her walk was hidden an innocent warning of the woman she would someday become.

The sounds of the household remind her she has been at the window too long. Her husband will tease her with his gruff humor, his weapon of choice against the inevitable loss of each child to the world. She pushes back the curtain and fusses with the window latch, a quick excuse for hovering at their daughter’s departure. The latch releases and she throws back the window.

The moon is out. Perhaps it has been there all day, hidden behind the pale white sunshine. But now the sky is deepening from blue to bruise. The scents of salt and seaweed roll in from the water. She hears laughter down on the street. A woman’s voice. A man in response. A new couple are walking arm in arm. The man leans to kiss the woman’s neck. Somewhere in the city, maybe on a rooftop terrace looking out over the water, she imagines her daughter and the young man. They are probably too shy to hold hands. But they have given each other that first series of glances, they have entered that first important conversation with its hints and allusions, its gentle daring.

She looks up at the sky, seeing again her little girl in that cotillion dress on that stage so many years ago, staring down at her shoes, worried about going too fast, worried she will fall and make a fool of herself in front of all those people. She wants to tell her daughter to back up, to dash behind the stage curtain and hide. But the girl keeps walking her graceful steps up to the edge of the stage. She doesn’t stop, she glides off over the heads of the crowd, floating above the people and into the sky until she’s left it all behind. She keeps climbing, higher and higher, until the ghost of her hovers bright in the warm sky of this night above St. Tropez.

Note: Translation is, in the simplest sense, the movement of something—an idea, a phrase, an image, a story, an expression—from one language into another. I’ve always been fascinated by the language photographers use to confine an entire story to a single, apparently motionless frame. Yet that story can remain beyond the grasp of the viewer, especially in the case of a photo like Margaret Saine’s St. Tropez. It is beautiful in its own right, but offers a set of potentially unanswerable questions. This translation presents one possible answer.

A further note: I also love the way that a visual image can be both voluble and silent at the same time. This is a mode of expression completely unavailable to a writer; we simply cannot be those two things at once. In this way, a translation of an image is a betrayal of its original nature. This happens in literature as well, when languages and cultures have impossibly-wide distances between them. This reality doesn’t necessarily negate the value of the translation, but it must be accepted as inherent to the process and art of translation.

Margaret Fletcher Saine studied photography at the University of Virginia. She held an internship at the National Geographic Magazine in Washington, DC. In 2000, she moved to Tokyo where she was a finalist in the Japan Times Photo Competition. She currently lives in Lausanne, Switzerland, where she has studied with Italian photographer, Alex Subrizi. Her work will be part of a photography exhibition to be held in Lausanne in April.
+++