Loss of Grasp -- the Multimedia work of Serge Bouchardon

France has a long history of experimentation in digital literature, generative narrative and combinatory poetics. Owing in part to a tradition of constrained writing practices, the most celebrated exemplars of which are the Oulipo, French authors have worked at using the capabilities of the computer as an aspect of their writing practice for more than thirty years, whether to play with generativity, to introduce multimodality, or to explore the semiotics of the graphical user interface as a writing and reading environment. Authors such as Jean Pierre Balpe, Jean Clément, Philippe Bootz, and Annie Abrahams have done pioneering work in writing for digital media.

The francophone scene remains very vital. The NT2 laboratory in Montréal maintains an that includes more than 3500 works of hypermedia art and literature.

Today I want to offer a link to the work of Serge Bouchardon an author and critic who teaches at the University of Compiegne. With a background as a multimedia developer, Bouchardon’s works are particularly notable for the innovative ways that they explore the readers interaction with the interface of the computer. Gestures such as moving the mouse to glide across or scrape at the surface of the screen, typing on the keyboard, even speaking into a microphone or staring at ones own reflection as recorded by a webcam, become both metaphors within the text and ways to traverse it. Serge’s work is also marked by a very witty sense of humor. He also does English-speaking readers the service of publishing his works in both French and English.

Bouchardon’s Les 12 travaux de l’internaute / The 12 Labors of the Internet User (2008) takes ordinary tasks that average internet users regularly confront, such as logging on to the internet, shutting off annoying pop-up windows, remembering passwords, eradicating a virus, and so forth, and maps them onto the 12 labors of Hercules. The interactor then must play through the 12 tasks (some of which are nearly impossible and insanely frustrating), in order to achieve Internet Elysium. 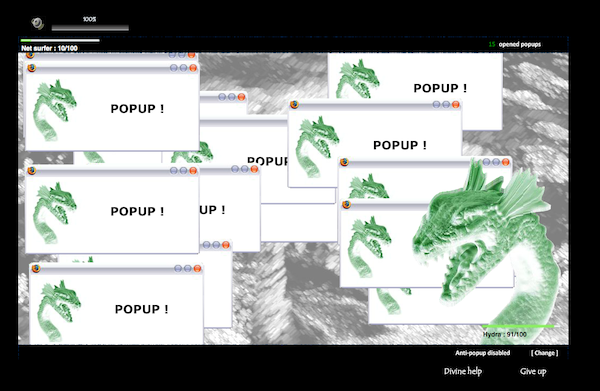 Bouchardon’s Toucher / To Touch (2009) consists of 6 tableaux that meditate on the paradoxes of screen “touching.” So the reader must use the computer interface to move, caress, hit, spread, and blow, in order to produce synesthetic effects, for instance “caressing” to elicit moans of satisfaction or “spreading” to produce a responsive sound painting, or “hitting” to try to crush a fly that is moving across the screen, making it impossible to focus on the words that you are reading. 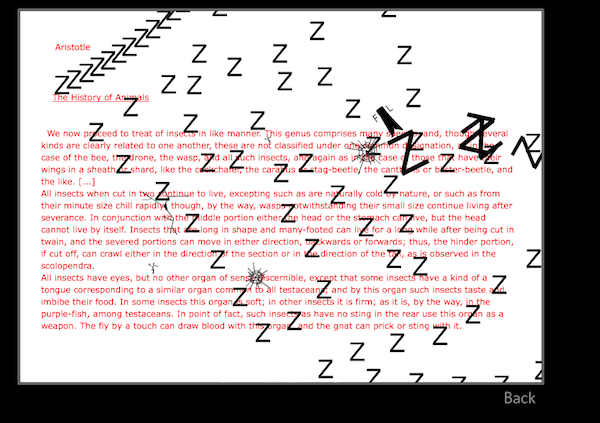 My favorite of Bouchardon’s pieces is his most recent, Déprise / Loss of Grasp (2010). In this work, we encounter a family man, approaching middle age, perhaps in the midst of mid-life crisis, who has begun to feel that his life is falling apart. The author uses a number of very clever multimedia techniques to enlist the reader in identifying with the protagonist’s struggles. The reader loses control of the interface in a variety of ways, just as the narrator feels that he is losing control of his life. Several of the scenes are very funny. In one section, we encounter a love letter which reads as words of adoration if we pull the mouse one direction. Reversed however, the same lines tell the reverse tale, of a relationship falling apart. In another scene, the protagonist encounters a school essay written about his son about heroes, and why he does not believe in them. By clicking on lines with the mouse, we are able to read between the lines from the parent’s point of view and find out what the son is really saying “I don’t love you anymore,” for instance, or “Soon I will move away.” 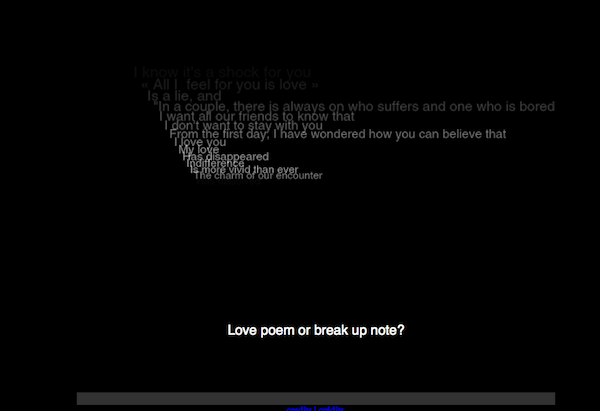 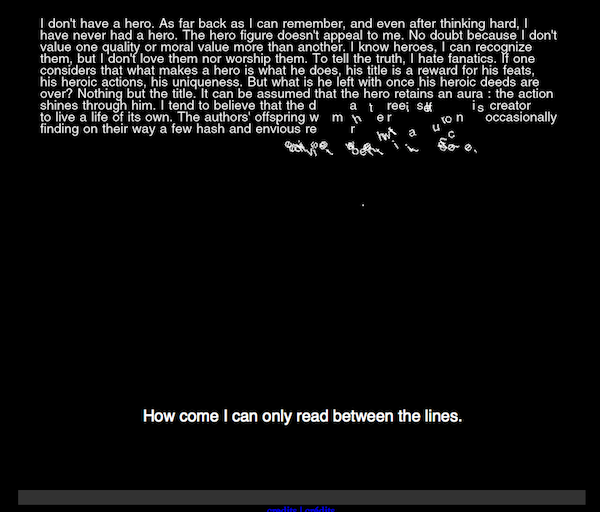 In playing through Bouchardon’s works of recent years, I notice a move from first engagement and amusement with the situation of being embedded in a relationship with devices and interfaces that seem somehow mysterious or unnatural to us despite the fact that they are now a part of our everyday lives, towards an engagement with these devices, gestures, and interfaces as new modes of revealing and engaging the reader in narrative: a move from novelty towards truly rich metaphor.