[Venn diagram]: a mathematical illustration that shows all of the possible mathematical or logical relationships between things.

There is an order to where things do or do not overlap. My boyfriend Victor works at Applebee’s. He also sells weed. Sometimes, when he owes people money, he’ll pay them with stolen Applebee’s gift certificates. This is all problematic because:

A. Applebee’s is nothing more than a microwave with seating and service staff. They reheat food and the local outlet is always running out of staples like milk or lettuce even though they’re at the North end of a Wal-mart parking lot. He’s actually paying his petty creditors with a worthless currency, so he ends up owing them even more and then he asks me to lend him a little something until payday and then he forgets he asked to borrow the money but I remember and I get angry.

B. Victor mostly deals in ditch weed so his customers are always calling the house angry because his shit doesn’t get them high. They call in the middle of the night when I’m trying to sleep and they’re trying to get a buzz. No one is happy.

C. My mother is always telling me I can do better, and now, when I look at my boyfriend I think of all the men I could be sleeping with if I weren’t stuck with him and then I think of all the energy it would take to leave Victor and I don’t do anything. 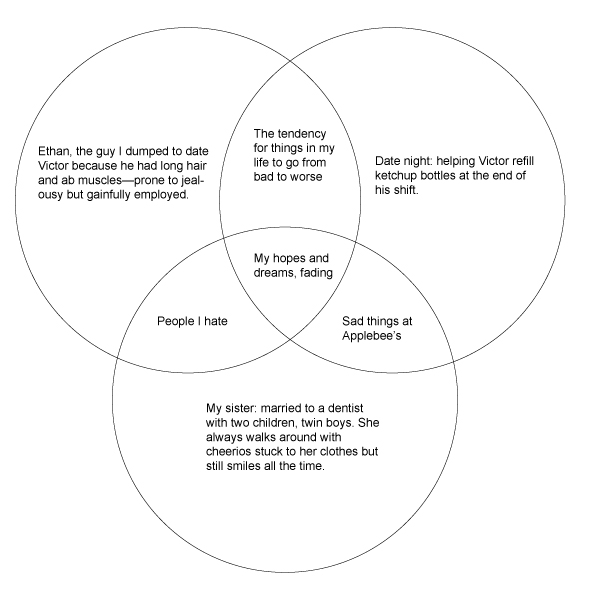 I work as a dental hygienist, for my sister’s husband Glenn. All day long I have to look and feel inside people’s mouths. It is horrifying. At night, I dream of being trapped in a room of elderly men with halitosis and poor gum health. When I wake up screaming, Victor will groan, cover his head with a pillow and tell me to shut the fuck up. No matter how tired I am, I am awake at six in the morning, staring at the clock, trying to come up with an excuse to avoid going to work. I also hate work because:

A. I hate listening to other people talk and despite the fact that I am scraping away at their teeth and suctioning saliva and otherwise working in the oral cavity, the patients yap awkwardly, telling me all the sad little things about their lives that they should keep to themselves.

B. Glenn is always trying to sleep with me. Sometimes, when he’s in his office, sitting behind his big mahogany desk, eating the tuna sandwich my sister has prepared for him, I’ll go in there, and take off my scrubs, and tell him to go brush his teeth so I don’t have to smell the tuna stink on his breath while we’re having sex. Afterwards, he follows me around and gets clingy which just makes the workday even longer.

C. I look terrible in scrubs. 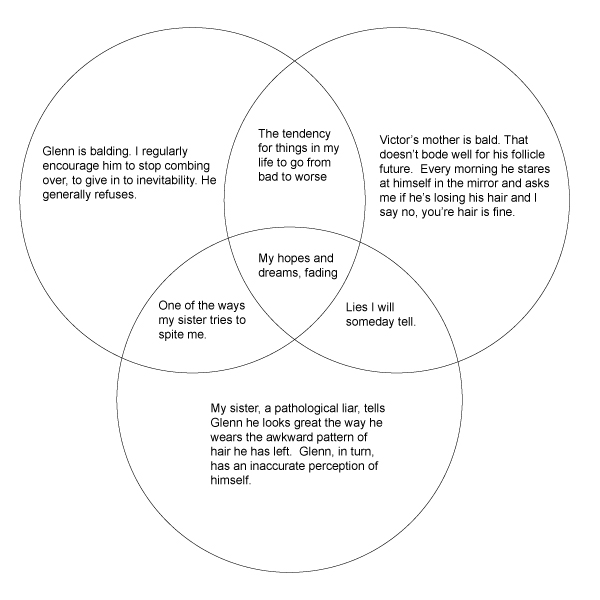 Every Thursday, my mother, Glenn, my sister, Victor, and I meet for dinner at my mother’s house. Sometimes, her loser boyfriend, Michael joins us. My father’s name was also Michael. He’s dead. He was a loser too. My mother has bad taste in men yet always wonders where I get it from. These dinners are monstrous affairs because:

A. Glenn is about as subtle as a nuclear holocaust. He plays footsie with me beneath my mother’s dining room table and stares openly at my rack until my sister pinches him between his ribs. Then he’ll cough and look up at the ceiling fan, but five minutes later, he’ll forget himself again and start the whole thing over again.

B. My mother’s not a good cook but she thinks she is so she tries to experiment and thinks she’s doing us a favor by introducing us to dishes like Carol’s Hot Gazpacho or Beef Tongue Noodle Soup and we all have to sit there, choking down this horrible food because my mother is fragile and needs the reassurance that she is nurturing her adult children well.

C. While Glenn is across the table awkwardly trying to be my secret lover, Victor is next to me, groping my breast with his arm, sneaking his hand between my thighs, unable to take the hint that if my thighs are clenched shut, they are denying him entry. By the end of the dinner, I’m so tense and achy that I wonder how I will muster the strength for the next week’s ordeal. 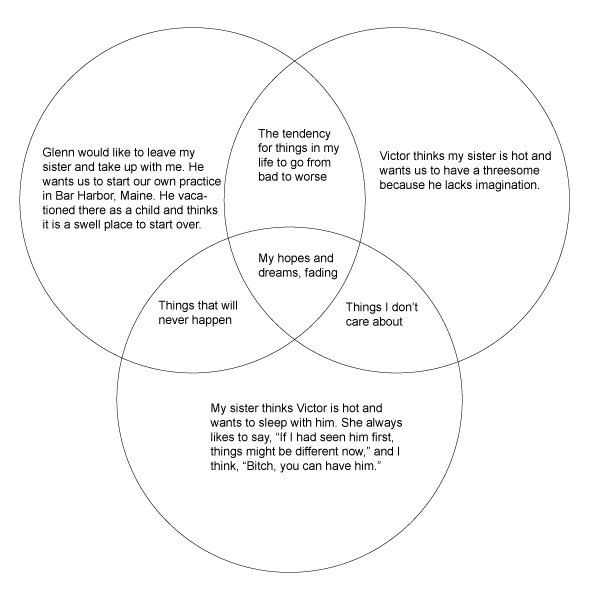 Three or four times a week, I go out with my best friend Lacey to The Uphill. On Wednesdays, they host White Trash Karaoke night. We dress up in our best trailer park wear—cutoff denim skirts, tank tops, patent leather heels. We drink warm pitchers of beer and smoke Marlboro Reds and pretend we’re single and sing Def Leppard and Toby Keith and Everclear until our throats are sore. Lacey is married to the guy who knocked her up senior year but he’s out of town a lot because he works highway construction. She leaves her kid with her mother and drinks so much that her cheeks are always flushed red. Sometimes, Victor joins us. They hate each other because they used to date before Lacey slept with her baby daddy. During the school year, The Uphill is always crowded on Wednesdays because there’s a university in the next town over. The college kids think they’re better than us townies. They think we don’t know they’re laughing at us. When we’re not at the bar, Lacey and I spend our time:

A. Making her kid play fetch with lawn darts while we sit on metal folding chairs in her back yard, smoking cigarettes and drinking hard lemonade.

B. Following her baby daddy in my car, when he’s in town, because she thinks he’s cheating on her. We’ll follow him to Wal-mart and Ace Hardware and NAPA Auto Parts and McDonald’s and I’ll start to complain because his life is boring but Lacey will beg me to keep on going, so I will, because she’s one of the only people I really like.

C. Helping Victor bag his ditch weed, because he pays Lacey with free samples and twenty bucks each time. 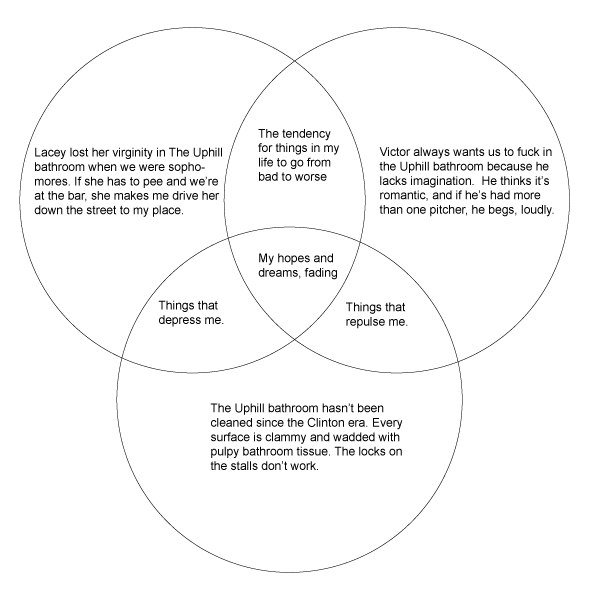 My dad died when I was in the seventh grade. He drove himself right off the bridge that spans the canal separating our town from the next town over. My mother swears he went off the bridge because he was too cheap to get his brakes fixed. She’s probably right. When he died, I started to feel hopeful about things so until I graduated high school, I studied hard, and did cheerleading with Lacey and dreamed about going to college and becoming a doctor. Then I learned that it took a really long time to become a doctor, and a really long time to become a nurse, so dental hygiene started to look like a decent option, especially when I learned you could earn your degree online. I was also excited about the possibility of unlimited access to laughing gas. The reality of my decision began to set in when I realized that:

A. Laughing gas wasn’t as fun to play with as it seemed in Little Shop of Horrors.

B. Dental hygienists don’t make a lot of money unless they’re sleeping with the dentist. 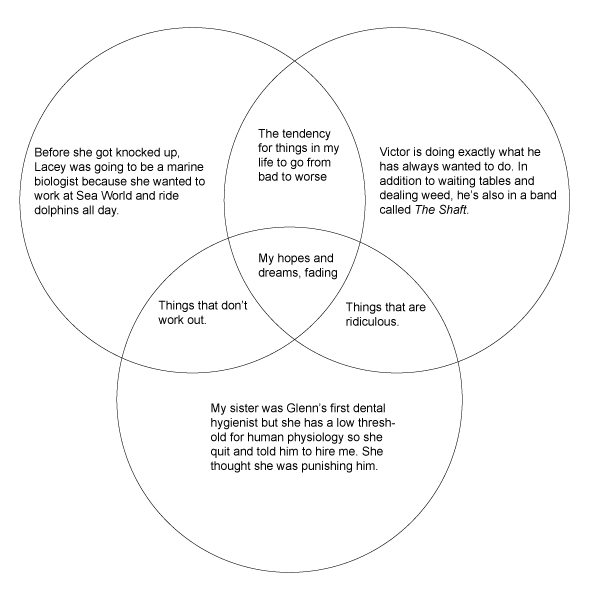 Victor always falls asleep before I do. Sometimes, while I’m watching Conan, I call my sister, and we bitch at each other about our lives, and we’re really passive aggressive about it. I tell her that Victor’s driving me crazy and I had to handle four pairs of dentures earlier that day but at least my asshole boyfriend is fantastic in bed. She tells me how the boys are wearing her out, and how Glenn doesn’t help out enough but at least she’s not poor and has two healthy children. I had a child once. His name was Ben. One night, when he was seven months old, I put him in his crib and kissed each of his fat cheeks and listened to his shallow breathing as he fell asleep and loved him so fiercely that my world felt perfect. In the morning, when I went to pick him up, he was heavy and perfectly silent and perfectly still. That was then. This is now:

A. No one could explain why my child died. These things happen, the doctor in the emergency room told me, as if his explanation was enough.

B. I couldn’t stand the sight of my husband because my child looked like he was carved from his father’s ass. Dude lives downstate now, with a new wife and a new child. Sometimes, he calls me in the middle of the night, drunk, and tells me how much he misses us.

C. I will never move from this town. My only child is here. 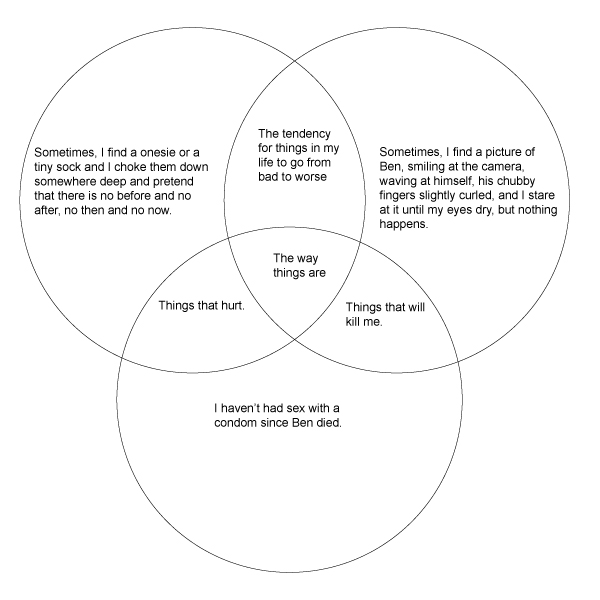 “Between Things,” originally appeared in Pindeldyboz.