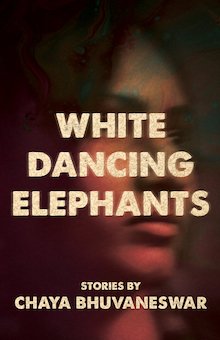 The characters running through the seventeen stories that make up White Dancing Elephants, Chaya Bhuvaneswar’s debut collection, often find themselves picking up the pieces. They must deal with the consequences of others’ actions, or of their own. The author embraces the POVs of characters from varying, and sometimes overlapping, backgrounds in order to dive headfirst into the intersections of gender, race, class, and sexuality. Oftentimes, these concepts are directly at odds with one another, made physical through the characters. In “A Shaker Chair,” a black therapist feels attracted to and repulsed by her newest patient. An Asian professor has an affair with the white husband of one of her Asian friends, in “Talinda.” In “Orange Popsicles,” an immigrant student encounters a predator on campus and learns that venomous male dominance runs wild within all borders. Bhuvaneswar’s stories are as deeply political as they are personal.

She opens her collection with the title story, “White Dancing Elephants”, which focuses on a forty-year-old woman mourning the death of her unborn child. Told in first-person, the unnamed narrator speaks directly to her recently miscarried son, as she walks the rainy London streets from her hotel to a pharmacy in search of sanitary pads. She’s still bleeding: “no rush of blood, no horrifying trickle down my leg. Just two clear stains, understated…enough blood for me to know.” “White Dancing Elephants” is a perfect way to kick off this marvelous assembly of stories. It’s intrinsically feminine; issues pertaining to women, South Asian women especially, are the through line for this collection.

In “The Story of the Woman Who Fell in Love with Death,” a small boy haunted by his elder sister’s disappearance reads, in a modern day Starbucks in Greenwich Village, a tale about a socially trapped young woman. She is owned by her father, “a man of little importance,” and marriage is her only escape. In this society, even insignificant men can keep women as forms of property, to be exchanged via nuptials. When the health of her betrothed is jeopardized, the god of death appears, and she can’t help but be awestruck by his beauty. She offers a carnal bargain for her husband-to-be’s life, for this is the type of plea that is expected of her, of women. Back in the real world, this boy grows up to become a physician. Even in adulthood, he is still deeply troubled by his missing sister and refuses to believe that she may be dead, though he is willing to accept that she may have freely bargained herself away, like the woman from the storybook, so as to escape their abusive father. Bhuvaneswar weaves the nonlinear, dual-dimensional nature of the story with ease.

A sixteenth-century Portuguese novitiate toys sexually with a male Indian slave in “Heitor.” The story begins moments before he’s to be executed and then works backwards. Mariana, the nun in training, is a “rich virgin” who comes “from one of Lisbon’s wealthiest slave trading families,” and she takes pleasure in tormenting Heitor, slave to the nuns. (Indians, in colorist Europe, were thought to be smarter and less libidinous than their darker African counterparts, so they were designated to holy settings.) Mariana undresses in front of him, has him “stand near” while she bathes, “stand guard” while she sleeps—perhaps longing for him to join her, something for which “the police would have torn off Heitor’s balls,” or worse. In the present, as he stands naked before a firing squad, Bhuvaneswar expertly textures the action with expositional information, via Heitor’s memories. “Heitor” is one of the shortest in the collection (about four pages), but the impression it leaves is just has lingering as the rest.

While White Dancing Elephants effortlessly demonstrates an array of voices, the narrator of “Adristakama,” this collection’s finale, begins with a brief dissection of the potentially misguided nature of forced, or obligatory, diversity. Nisha works for a domestic violence group that seems to always feature her “smiling brown face” in their newsletters. Such efforts, while well intentioned, tend to only display the types of diversity that can be seen. Nisha is also queer. When things don’t quite work out with her girlfriend Lauren, she chooses to return to India so her family can arrange for her to marry, to a man, a practice alive and well in the 1980s. Lauren implores her to not “put yourself in the ground” just “to please your family,” but Nisha doesn’t know what else to do. Theirs is an unseen love, known as “adristakama.” Unseen because their love lives in a decade that was notoriously unfriendly to the queer community. Lauren, unable to allow the time’s generally antagonistic attitude toward same-sex romance to win, flies to India to change Nisha’s mind and win her back. “Adristakama” closes out White Dancing Elephants on a tender and triumphant note.

Marginalized folks are knocked down and victimized in several of these stories, but, for many of them, the circumstances unlock something fierce, or unexpected, within them. They hail from all around the world, representing many walks of life, and remind us that the mistreatment of people based on skin, sex, and sexuality exists everywhere. The prose is unwavering and seldom self-indulgent; Bhuvaneswar has a no-nonsense way of stringing words together and making her point. Individually, these stories sing. Collected, they form an opera. Chaya Bhuvaneswar’s White Dancing Elephants is a treatise on love and justice that will sear the heart of anyone willing to listen.

Chaya Bhuvaneswar is a practicing physician and writer whose work has appeared in Narrative Magazine, Tin House, Michigan Quarterly Review, The Awl, jellyfish review, aaduna and elsewhere, with poetry forthcoming in Natural Bridge, Quiddity, apt magazine, Hobart and more. Her poetry and prose juxtapose Hindu epics, other myths and histories, and the survival of sexual harassment and racialized sexual violence by diverse women of color. She received the Dzanc Books Short Story Collection Prize, a MacDowell Colony Fellowship, and a Henfield award for her writing. Her work received four Pushcart Prize anthology nominations in 2017. Follow her on Twitter at @chayab77 including for upcoming readings and events.