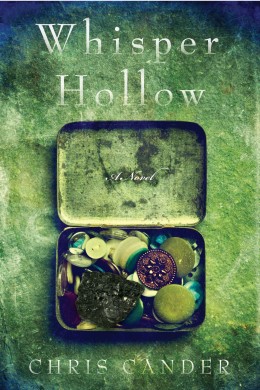 Chris Cander begins her new novel Whisper Hollow with an excerpt from Luke 12:2: “Nothing is covered up that will not be revealed, or hidden that will not be known.” Such precise words for a book that so ties up the reader in its intermingled stories, reveling in its ability to engross without heaping on confusion. The story of Whisper Hollow is elegant, long, and mysterious.

The characters and stories of the book span more than fifty years, beginning as two young German émigrés make their way to coal mining country of West Virginia and settle in the town of Verra, a place which sits near the valley of Whisper Hollow, the fulcrum for all of the principal players. Their twin daughters are soon born and it is here where the book’s fusion lays its true beginnings. The death of one of the four-year-old twins is not glossed over as much as it’s held back. Yet, the death of one twin hangs over the other, also implying that the survivor lives the rest of her life with an enigmatic feeling of guilt. She dedicates herself to religious devotion that is less supplication, but more madness.

It can be a difficult task for any writer to navigate a plot that spans multiple generations with a handful of characters, but Cander does this brilliantly. Each chapter is titled with an exact date (e.g., October 17, 1916; August 13, 1969). In doing so, she brings extra focus on a specific moment in time, emphasizing the importance of that date and precisely what is happening; she is also able to skip over months, if not years and decades, to move the plot ahead. The reader is not burdened with minutia that could hold back such an expansive story and is, instead, subtly reminded how important the passage of time is to the book. When one character considers leaving Verra, the narrative notes:

No, she decided, she wouldn’t go anywhere else. There was no point in it. She would stay where her memories were buried, a weed growing on their graves.

The memory of the dead can’t help but pull on those who still live in Verra, who try to carry on with their lives even after the most heart wrenching of tragedies.

The book was surprising at most every turn. Its marrow is made up of the coal mining community, a hard and dangerous life not only for the men who go underground every day, but also their families—and more specifically, their wives. Tragedy strikes Whisper Hollow over and over again, but the notion that a difficult life is already prescribed for the citizens of Verra, West Virginia, is a hard one to shake.

As the plot begins with twins, much of the rest of the story deals with doubling. Myrthen Bergmann, the surviving twin, is set to be married the same day as another woman, Alta Krol (approximately the same age). Their weddings are in the same church, their husbands off to work the same shift in the coal mine. Their lives are inherently inter-twined and so is their story with the most important aspect being that Myrthen marries the man that Alta really loves.

Even when time jumps forward in the second half of the book with new characters added, Myrthen and Alta can’t help but meet again, their paths literally destined to come together in Whisper Hollow.

As much as the plot is intriguing, the characters are most impressive. Cander writes them entirely compellingly. The reader can’t help but feel a connection to them. They are not as they first appear, nor, are they simple cogs to move the generational story forward. All principal characters are well-developed, unexpected, and necessary. It could be easy to stereotype these salt-of-the-earth people and simply paint them as one dimensional members of what we expect of coal mining country, but Cander investigates their desires and fears and loves. The repetitiveness of their lives doesn’t yield what is expected.

They might be stuck in Verra, but most are working so hard not to feel that way. The aforementioned Alta Krol is not only a homemaker—a wife and mother to coal miners—but she longs to be an artist:

Alta sat on a stool in front of the cabin window, stretched paper on her lap. A glass jar of cloudy water rested on the sill. Another one, empty, held her brushes.
She was naked.
“What’s the color of happy?” she asked.

These sorts of narrative moments add dimension to the characters. When tragedy or joy wallops through their lives, the reader is struck by this. By the end, it is obvious that the complex characters are the most commanding element of Whisper Hollow.

The novel is about many things. It would be trite to say it is mainly about how the past can haunt future generations. No, Whisper Hollow is about people. The past can be haunting and can make the present more difficult, but even without past tragedies, these people’s lives would be stacked with hardship and anything but perfect. The unspoken and unearthed mysteries will either always meander or loom large, but the core of Whisper Hollow is reminiscent of a poem by e.e. cummings: “love is the voice under all silences, the hope which has no opposite in fear.”

Chris Cander is a novelist, children’s book author, freelance writer, and teacher for Houston-based Writers in the Schools. Her novel 11 Stories, published by a small press in Houston, was included in Kirkus’s best indie general fiction of 2013.

Ariell Cacciola is a writer based in New York City. Her work has appeared in various magazines, journals, and anthologies in the US and Europe. She is also the World Literature Editor for The Mantle. She can be found online at ariellcacciola.com and on Twitter at @ariellcacciola.