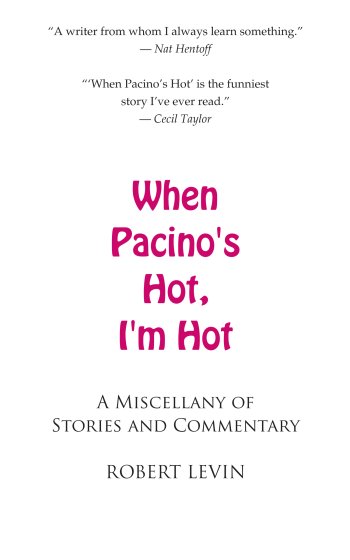 A collection by its very nature requires cohesion, a controlling idea, or at least a consistent style of writing, to link unique pieces. Any departures from that theme—no matter how tolerant it may intend to be—must be purposeful departures, each a worthy variation. The trouble with Robert Levin’s collection When Pacino’s Hot, I’m Hot is that it strives to encompass too broad a range. The subtitle warns that the collection includes both stories and commentary, but the overly scattered result prohibits any reconciled sense of whole.

The first (and titular) piece is a clever, outstandingly funny short story that promises the reader a rollicking good laugh if the ribald style is to be sustained throughout the collection. Instead, the work continues with lesser quality works of fiction… (like “Peggie,” or “Sex with a Very Large Woman,” that describes exactly that, or “Dog Days,” in which the protagonist’s wife catches him fornicating with their uncomprehending puppy). There are alcohol-abuse confessionals, jazz, baseball, and drug abuse. There’s a rant on recycling, obtuse music reviews, and highly specific, political tirades that must have been written as letters to a local editor. If the book sets out to be a short story collection, it misses that mark widely.

Even if the rants and essays were removed, the collection still lacks cohesion. The titular Pacino story is comic genius—satire at its best. Like Swift’s A Modest Proposal, there is no back-peddling or apology—it takes its suggestion to the nth degree and leaves the reader reeling in the joyful discovery of the author’s tongue-in-cheek. Pacino delivers self-deprecation and humor that packs a punch. By contrast, the disturbing details of a man’s unremorseful rape of his young dog followed by his unlikely, grandiose atonement and animal rights activism leaves the reader with no joy of discovery but rather a hollow, depressing sense of voyeurism. Likewise, encountering a man’s persistence in seeking a desperate, obese woman’s female parts amidst her corpulence (and finally treating her to a romp) comes across not as satire but as mean-spirited locker-room gossip. It aint Pacino. No wonder that one was a storySouth Million Writers Award Notable Story of 2004. In fact, the collection is worth owning just for the joy of reading those first delicious Pacino pages.

This is a story of repeated mistaken identity—sometimes Levin’s character is Dustin Hoffman, sometimes Leonard Cohen, sometimes Al Pacino. The women love him, or the famous man they believe him to be. Sadly, taking the goggle-eyed women home to his place is problematic:

Now before I go on I should point out that my place isn’t exactly a showplace. It suits my budget, but it’s in an old Lower East Side building where the facilities aren’t in their conventional locations. (We’re talking bathtub in the living room, toilet in the kitchen, that sort of thing.) Plus, I share the joint with several legions of cockroaches, an ever-extending family of rodents and an apparently unprecedented and aerodynamic hybrid of the two. (The biologists who’ve come from everywhere to investigate this phenomenon always leave with very concerned expressions on their faces.)

But the fact remains, a woman wants this fellow’s attention, and he’s learned the hard way that correcting her mistake only leads to heartache, sometimes worse.

I’ve given the matter a great deal of thought and I’ll explain this just once. The women I attract are not what you’d call off the top shelf. Though they all qualify as women in the technical sense, are all, that is, in possession of the crucial anatomical components (which, more often than not, are in something like a normal configuration), they are not exactly achingly beautiful, beaming with mental health or candidates for a Star Fleet Academy scholarship. In fact, and without exception, they are pretty desperate people, sick puppies and three-legged cat types. Many of them suffer horrendous hygiene problems and are also myopic to the point of posing a serious threat to themselves. They are usually very drunk as well. Given their condition the service I provide them is every bit as valuable as what they do for me.

The story delivers sublime images, dialogue and descriptions, and a charming little love story too.

A sparrow of a girl, no more than four-foot-ten and alarmingly skinny, Roger had thick black hair that, falling over most of her face, also fell nearly to the floor. The first time I saw her, from the other end of a long and crowded bar, I thought she was a half-opened umbrella standing on its handle.

The Drill Press must be congratulated for creating the vehicle by which to get Levin’s Pacino story on the road. How often does one encounter undiluted intelligent foolishness and tears of laughter? A Lamborghini with a dent in the bumper or strange aftermarket seat covers is still going to rev like a Lamborghini, and no doubt it’s worth the ride.

Robert Levin is the coauthor and coeditor, respectively, of two collections of essays about jazz and rock in the ’60s: Music & Politics and Giants of Black Music. Among numerous other places, his stories and commentary have appeared in, or on the web sites of, Absinthe Literary Review, Best of Nuvein Fiction, Cosmoetica, Eyeshot, New York Review, Rolling Stone, Sein und Werden, Sweet Fancy Moses, Underground Voices, Unlikely Stories, The Village Voice and the Word Riot 2003 Anthology.