When He Sprang From His Bed, Staggered Backward, And Fell Dead, We Clung Together With Faint Hearts, And Mutely Questioned Each Other by Christopher Kang 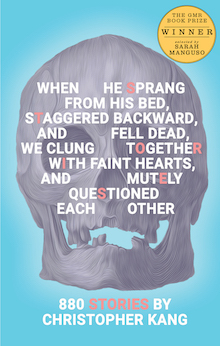 The most striking feature of Christopher Kang’s short story collection aside from its title, When He Sprang From His Bed, Staggered Backward, And Fell Dead, We Clung Together With Faint Hearts, And Mutely Questioned Each Other, a story in itself, is the subtitle advertising that the book contains 880 stories. Due to this startling number, a potential reader could be excused for thinking the book will be a large, heavy tome, but instead they’ll be pleasantly surprised to find that it’s a slender, welcoming volume of 140 pages. Once the reader decides to dip into the pages themselves, they’ll discover that the longest story in the collection is a paragraph and the shortest is only a few words.

It’s fitting that Kang’s When He Sprang From His Bed… was selected as the winner of the 2016 Green Mountains Review Book Prize by none other than Sarah Manguso, as Kang’s book has a similar premise to Manguso’s own book, 300 Arguments. While Kang’s collection is made up of micro stories and Manguso’s collection is made up of micro essays, the ability of their respective authors to compress a thought, an idea, a story, or an argument into just a few words or lines is quite remarkable. With both books, the reader would be wise to read each entry a couple of times and sit with it a while to fully absorb its meaning. In this way, the two books are more substantial than they first appear.

Several reviewers have compared Kang to the resident queens of micro fiction, Lydia Davis and Amy Hempel. While this is a somewhat accurate assessment, it doesn’t quite capture the utter strangeness of Kang’s stories. A closer comparison might be to the works of Franz Kafka. While Kafka wrote his share of more “traditional” stories, he also wrote a number of parables, fables, and aphorisms. Some of the stories in this book read more like one of Kafka’s philosophical aphorisms than a story. Kafka’s most famous aphorism is: “A cage went in search of a bird.” This very well could have inspired Kang’s story #33, which reads: “He leaps into the void. He dies while falling.”

Like other minimalist story writers, such as Davis and Hempel, Kang doesn’t name his characters. Kang most often refers to the main character in each of his stories as “he.” This makes it easy for the reader to imagine that the character referred to in each story is really one person who is going through all the different trials and tribulations of the narratives, creating a sort of unified whole. While Kang does occasionally break from this mold to include stories with first person narrators, it’s this ubiquitous third person narrator that really captures the reader’s imagination, as it allows the reader to weave the stories together into their own literary tapestries.

One major question the book raises is how short can a story be and still be considered a story? Can it only be a handful of words and still be called a story? Can it be a line, a paragraph, a page and still have the same effect as a longer story? The writer Hortense Calisher once said, “How long should a short story be? As long as a piece of string,” meaning that a story can be as long or as short as needs to be to tie up the narrative package. But does a story also need to have certain elements, like a main character, a plot, a narrative arc? Kang’s story #107 reads, “The book is torn in two by the sunlight.” Is this a story, or is this just a description that should take place in a larger narrative? Sure, it sounds nice, but is it a complete story?

On the other hand, Kang is often able to craft a single sentence into a wonderfully evocative story. An example of this is story #203: “He paints the wall with a brush he used to paint his mother’s portrait.” While placing a distinct image in the reader’s mind, Kang also inspires them to ask questions about the gaps in the narrative in an engaging way. Why is the main character no longer painting portraits? Where is his mother? Is she still alive or is she dead? When the author has so few words to convey a story, as in a piece micro fiction, what is left out between the lines is just as important as what’s left in as the lines themselves.

Kang’s writing almost reads like prose poetry, which is fitting as most of his publications prior to this collection of stories have been poetry in literary journals. There has always been a fine line between the literary forms of micro fiction and prose poetry and it seems that the final distinction is always what the author decides to designate it. With Kang’s story #389, he could have just as easily placed the piece with its lyrical language and specific wording in a collection of poetry as a collection of stories:

For now, forget me. Abandon all of this and retreat into your statuesque residence where you can moderately recuperate your strength. Spend a few days there and return for a gentle reunion. I will wait for as long as you have sustained.

One minor criticism of the book is the stories are all so short and there are so many of them, they tend to fly by in a rush and start to blur together after a while. However, this can be easily solved by reading the book in smaller, more digestible pieces and taking the time to reread and ruminate on each story. Despite its short length, Kang’s isn’t a book that lends itself to being read in one sitting. It’s best to treat it like a sort of encyclopedia, dipping into it a few entries at a time, fully appreciating the details and then taking a break. This is why the form of numbered entries for the stories, instead of more traditional titles, makes a lot of sense for this collection. Not every story here is a gem, but the ones that are, are so delightful they’re worth reading the whole collection.

Christopher Kang earned an MFA from the Iowa Writers’ Workshop. His short fiction and poetry have appeared in jubilat, Massachusetts Review, Gulf Coast, The L Magazine, Verse Daily, Cimarron Review, Columbia: A Journal of Literature and Art, and Open City. He is currently a PhD student in English Literature at the University of California-Irvine.

Eric Andrew Newman currently lives in Los Angeles, but is originally from the Chicago area. He works as an archivist for a nonprofit foundation by day and as a writer of flash fiction by night. He has previously been named as a finalist for the Robert J. DeMott Short Prose Contest and the Howard Frank Mosher Short Fiction Prize. His work has appeared or is forthcoming in Cleaver, Exposition Review, Heavy Feather Review, New Madrid, and Quarter After Eight among others.