Whatever Happened to Harold Absalon? by Simon Okotie 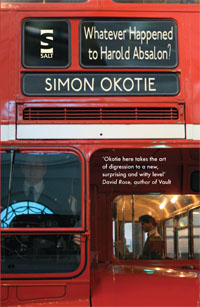 In his essay Database As A Symbolic Form, Lev Manovich writes,

As a cultural form, database represents the world as a list of items and it refuses to order this list. In contrast, a narrative creates a cause-and-effect trajectory of seemingly unordered items (events). Therefore, database and narrative are natural enemies. Competing for the same territory of human culture, each claims an exclusive right to make meaning out of the world.

I’ve never quite agreed with that, because the database feels like a natural source—even a necessary element—of narrative. Stories, for me, arise not from the ether or from private depths, at least not exclusively, but are assemblages of the personal and the cultural, of the items and ideas we gather in the course of our lives. So the “invention” of writing fiction is sometimes about crafting the best possible query for that database of experience in order to produce the results—the narrative—we’re after.

Which is all to say Simon Okotie’s novel Whatever Happened To Harold Absalon? is a brilliant example of the database novel (not that the author would necessarily refer to it as such). It’s an interrogation of how we tell (and, more to the point, read) stories at all in a world of infinite choices, and it is richly comic as well as creepy, compelling, and smart. Okotie’s protagonist, Marguerite, is an investigator (of some kind) charged (by someone) with following the wife of Harold Absalon after the disappearance (perhaps) of her husband. Hardly a nail-biting procedural, the action such as it is goes no further than up and down in an elevator and onto a bus—a timespan of a few minutes, at most. It’s a marvel of compression, not in the manner of Jean Echenoz and others who strip the detective novel down to its bones, but by taking a few minor, even meaningless moments of a larger investigation and exploding them to the point of rewarding absurdity.

Marguerite is a character in paralysis. No possibility is too slight or too unlikely to be left unexplored, which might be an admirable trait in an investigator but taken to his extremes becomes counterproductive, distracting, and sublimely frustrating. When watching the indicators above an elevator, for instance, trying to discover which floor his quarry Mrs. Absalon has risen to,

He did not know if there were lifts that travelled in other directions (aside, of course, from downwards): left, right, or any of the other (would they be called cardinal?) directions in between. By some fortuitous combination of factors, including the effects of gravity (or, possibly, primarily due to the effects of gravity), there was no need to even look into the possibility that Isabel Absalon had travelled diagonally up or down the building.

With comic predictability, he is so intent on considering these impossibilities irrelevant to the task at hand that he misses the moment his subject exits the lift—losing her as we lose his point. He’s forced upstairs to look for her more directly in a restaurant where he is distracted by considering the correspondences of shape between various types of spoons and their appropriate vessels, and the narrator tells us, “He took delight in this correspondence.”

Nothing is simple for our investigator. Even something as irrelevant as the motion of turning his body into the aisle to allow a fellow passenger to exit the bus is cause for pages of consideration, and the manner in which he might approach and/or come into casual contact with a female bus conductor’s body is a conundrum extending through much of the novel. All of which may sound overwhelming, even annoying, and it probably would be if not for Okotie’s adept use of a multifaceted voice. The narrative eye is both in Marguerite’s head and outside it, letting us follow his hyperattentive train of thought while simultaneously commenting on it, even acknowledging that all of us—character, narrator, and reader alike—are collaborating to produce the narrative, or to assemble it from the raw set of possibilities:

Are labradors the same as golden retrievers, Marguerite then wondered? He would look into it at his earliest opportunity. Alternatively, if you know the answer and happen to be sitting next to, or near to him on the top deck of the bus pursuing what he now took to be a very warm lead (different sort) in his investigation […] then please do tap him on the shoulder and let him know the answer[…]

We’re reminded that texts are a result of not only choices but also exclusions and that without those a story, or an investigation, can’t proceed because every object, action, and option demands equal attention and elaboration. That approach of attending to the surfaces of things in great detail, not to mention the detective novel conceit, is reminiscent of Robbe-Grillet. Or to make another comparison (and I’ll admit to making more comparisons to other novels than I usually prefer in a review, but one of the greatest pleasures of this book was how it made me think about the ways I read others), Okotie’s narrator is as attentive to minutia as any of Nicholson Baker’s. But where Baker’s distractions produce revelations about the wonder of overlooked things, Okotie’s produce anxiety and frustrated expectations in a sort of literary Zeno’s paradox: every moment of the novel brings us closer to its inevitable conclusion, yet with each moment the narrative breaks down further, spinning out more and more explorations (and words) from increasingly irrelevant items, and collapsing sometimes as Marguerite and his narrator struggle under the weight of their own attentions.

Yet Whatever Happened To Harold Absalon? does seem to be trying to reach some conclusion, some solution to the mystery, rather than being content to ask us why we expect such “firm expositional ground” from our fiction. The novel isn’t working against this desire so much as remaining cognizant of its complications while it renders Marguerite incapable of proceeding and makes us wonder if progress is meaningful when it depends on so much willful exclusion. The tension of that doubly-delayed gratification builds to breakneck momentum even as “nothing” happens (or, as Dominique Jullien writes of Echenoz’s novels, “everything happens but nothing goes on.”), and as Okotie plays with expectation, breaking the novel into quick, cliffhanging chapters, offering asides and summaries late in the novel “for those just joining” to catch up, and later ending a chapter with, “All would be revealed in the next episode, perhaps.”

The narrator, then, and we readers, build in our own expectations of genre and story as a way to access the novel—or the database of the novel, to go back to that notion. At one point, Marguerite realizes he has been thinking of a woman as a “datum” and is concerned not for moral reasons but because the word “was inaccurate or, at the very least, imprecise.” We do the same, perhaps, as we expect characters and their experiences to add up to something. A database, like a novel, needs a directing query to work, and in a culture increasingly inclusive of interstitial and intertextual works where all combinations are possible and any direction can be explored (or at least, as in a video game, give the illusion of explorability), the simultaneous pain and pleasure of trying to follow Marguerite’s investigation is a demonstration of the author’s primacy: not to shut out interpretation or flexibility, but to remind us that all stories—and all art, for that matter—are the result of options played up or played down, of José Ortega y Gasset’s exuberance and deficiency (to draw yet another example from my own database as an attempt to query this excellent novel in some useful way). And that we, like Marguerite whose embodied unpleasantness of appearance and odor is glimpsed in the periphery of the novel’s events, can’t help but be all too human as we bring our peculiar limitations and expectations to what we read.

Simon Okotie was born to Nigerian/English parents. His autobiographical first novel about growing up in rural Norfolk was a runner-up for the 1998 Saga Prize for black British fiction. He has a First Class engineering degree and Master’s degrees in Philosophy and Transport Planning. He lives in London.