What You Are Now Enjoying by Sarah Gerkensmeyer 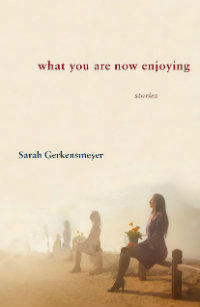 She had this crusty, warm light buzzing around her, insistently telling her what it felt like to be all by your little old lonesome so damn assuming self.

This is how author Sarah Gerkensmeyer describes the lonely woman who becomes the third wife of a godless polygamist in the story “Careless Daughters,” but really, it could apply to any of the broken, introspective heroines of What You Are Now Enjoying, a deft debut collection of short stories published by Autumn House Press.

Gerkensmeyer writes about the dank and dusty corners of the female experience with a dreamy, hungry economy of words, leaning heavily toward themes of children, motherhood, and the womb; but exploring with equal aplomb the very depths of love, loneliness, and claustrophobia.

There is a warm softness to two of the stories: firstly, the titular story “What You Are Now Enjoying,” about a group of women in breastfeeding therapy, followed immediately by “Dear John,” the story of a husband who claims he is leaving, but never quite seems to do so. There is a flinty resolve to others, most notably in “Vanishing Point,” about a retreat for those who consumed their twins in the womb. And some of the stories are almost entirely fantasy, from “Produce,” an almost tongue-in-cheek imagining of a high-end organic grocery à la Whole Foods that pays someone to cry over their produce, to “Monster Drinks Chocolate Milk,” which is exactly what you imagine.

Despite this assortment of styles and subjects, Gerkensmeyer’s underlying voice stays remarkably steady and consistent. Hers is a magical, daydreamy voice reminiscent of such contemporary writers as Sarah Rose Etter, Roxane Gay and Amber Sparks, for example, but which also channels Gabriel Garcia Marquez and Isabel Allende in her frank treatment of bizarre subjects that speak a universal truth. Writers like to explore this edge of reality—the line between “real” and “not real” in fiction is, by definition, a thin one—and Gerkensmeyer does this both provocatively and with real courage.

One of the most powerful stories in the collection, as well as one of the shortest, is “Cellar”: an imagining of a life turned into a museum in the cellar, where your first fight with a lover crystallizes into an object in a glass case:

It’s not just jars down here. There are a couple rows of glass display boxes, each one lit up softly from below. We found our first argument yesterday. We found the moment when we first
met and stared at it for what felt like hours, watching it flicker and buzz. Seeing these things isn’t anything at all like living them again.

Interestingly, it is much more often the first fight rather than the first love that is highlighted in What You Are Now Enjoying; Gerkensmeyer’s heroines tend to be hardened, unsentimental types seeking casual sex to fill a void and pass the time; that is, if they get enjoyment out of the act at all: in “Careless Daughters,” easily the strongest story on display here, the third wife describes sex with her husband as “familiar and as motivating as slipping on a pair of ordinary, just plain regular jeans.” They extend their overwhelming apathy to themselves: “In a painting, I could be beautiful,” muses the narrator of “Dear John.” But she does not believe herself to be beautiful, and—trapped on the other side of the page—the reader will never know if she is telling the truth.

While most of her jaded and unreliable narrators are of the twenty- and thirty-something stripe, Gerkensmeyer demonstrates an excellent range of characterization in “Wonder Woman Grew Up in Nebraska,” an alternate origin story for the superhero(ine) that places her in high school on a trip to an airport bar with her friends, where she witnesses the violence that transforms her into the Wonder Woman we know and love. Perhaps more impressive is her foray into the experience of an older generation in “The Rockport Falls Retirement Village Rescuers,” about a retirement home with a radical new program to reduce falls: pairs of retirees who assist each other in the event of a fall with a quickness of response that borders on telepathy; or perhaps is telepathy. Gerkensmeyer seems to be prodding us to wonder if there is a difference, after all.

Magical realism or Fabulism is frequently billed as a way out of everyday life, and as a way of coping with doldrums and unlivable situations by escaping them altogether. Gerkensmeyer seems to have an alternate view of things: in these stories, the escape is in predictable reality. Magic keeps you on your toes; anything can happen, and uneasiness reigns. The trip from unearthly to ordinary is always a bittersweet odyssey—but it is a trip we make every twenty-four hours, from our dreams at night to our lives in the morning. Gerkensmeyer is giving us the chance to relive that feeling, just for a little while. Who are we to deny her?

Sarah Gerkensmeyer was named a finalist for the 2011 Italo Calvino Prize for Fabulist Fiction, judged by Aimee Bender. She has received scholarships to the Bread Loaf Writers’ Conference, Ragdale, and the Grub Street Launch Lab. Short stories have appeared or are forthcoming in several journals, including: Guernica, The New Guard, The Massachusetts Review, Hayden’s Ferry Review, Cream City Review, The Nebraska Review, and North Dakota Quarterly.

Maggie Desmond-O’Brien collects good words the way some people collect stamps or coins. Some of her favorites are “diaphanous” and “echo.” She is a sporadic columnist at Recess Magazine, and her work can also be found this year in apt and decomP. She lives in Minnesota.