War, So Much War by Mercè Rodoreda 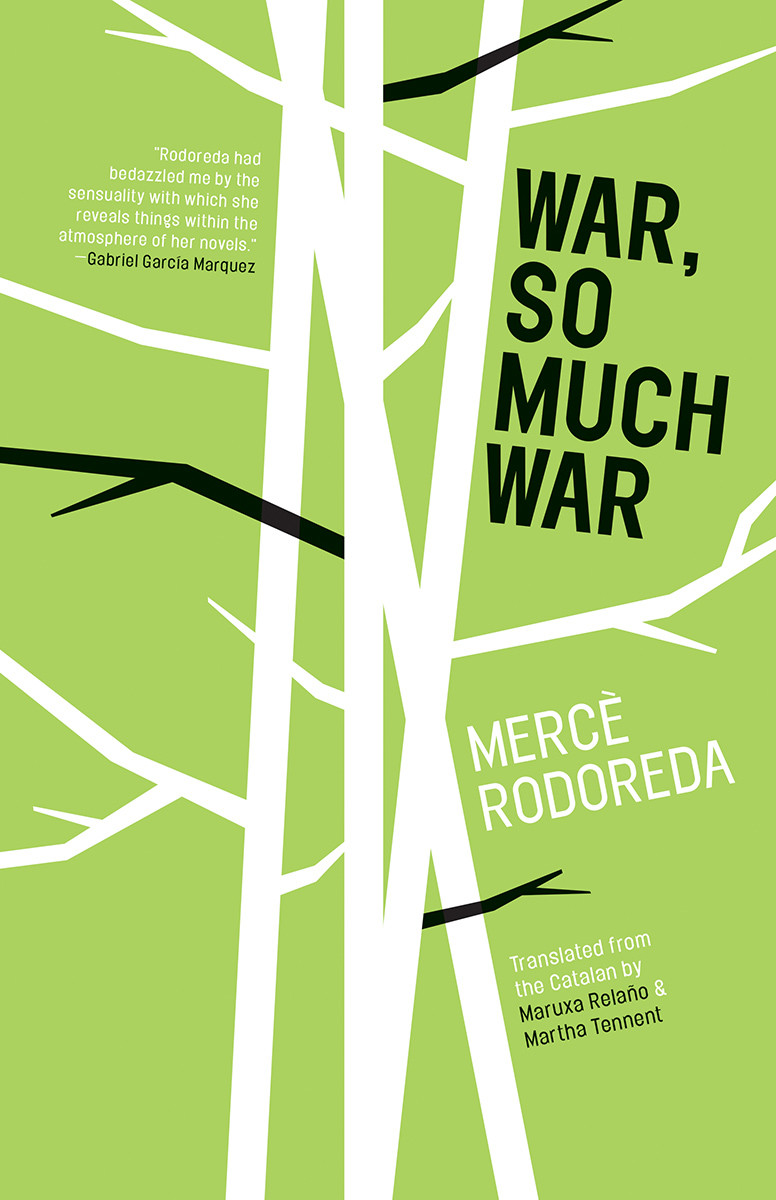 War, So Much War is a short novel following the travels of Adrià Guinart, a Catalan youth who, desperate to escape his stifling world, leaves home at the age of fifteen to offer his services as a soldier. In truth, though, the war plays a minor role in the boy’s experiences. Adrià roams far and wide, meeting people everywhere he goes, and Rodoreda’s novel is more concerned with the stories he hears, the farmsteads where he finds a bed for the night, and his brief encounters with the local people. However, this is a region where the conflict has left its mark, and with so much war in the air, it’s rarely just the soldiers who are affected.

Rodoreda has created a wonderful picaresque novel, a tale of a boy on a journey, which is never about the destination, but the road Adrià takes. The three parts of the novel reflect the different stages of his journey. The first half is spent running away, confused, fast-paced, with the boy constantly falling, the pace dizzying, disconcerting. The middle section is a chance to breathe out, giving the young wanderer time to look around, before the final part sees his thoughts turn towards home as he finally begins to understand the true horrors of war.

Adrià is the center of the novel, yet in many ways he is curiously absent, acting as a mirror for the experiences of others. Everyone he meets is drawn to him, each with stories to tell:

He stopped in front of me, stood there for a while, and then asked me if I knew the name of the nearest village. It occurred to me that he was in a jesting mood, but what he really wanted, like most people, was someone to talk to. Someone to lend him an ear.

In a country where so many have died, there is always someone wanting him to keep them company, offering him food, shelter, or even an inheritance, needing him to replace a son or a husband. Occasionally he stays for a while, but eventually he always moves on.

In the course of his travels, the boy hears so many stories, some harrowing, most fascinating. There is a man who wants to hang himself to escape the war; a miser who brings about his own demise because the local people are suspicious of his “gold-filled house”; the owner of an ornate mirror who is fascinated by the eyes he sees appear in it each night. Each of these tales has an element of truth, lessons for the boy to absorb:

As he bit into the firm, sugary flesh of the peach, he said without looking at me: The important things are the ones that don’t appear to be important. More than wearing a crown, more than having the power to make the world bow at your feet, more than being able to touch the sky with your hands, above all else, there is this: ripe fruit into which you can sink your teeth by the fading light of day’s end… look at that sunset!

Perhaps the most important of these lessons is learning that home is far more important than he’d ever realised.

In tracing the steps of a young man finding his way in life, the writer is building a picture of a country at war, but also a reflection of human behaviour, showing how we can act in the worst of times. Some fail the moral test (farmers hiding food, soldiers plundering and killing for no reason), while others are only too happy to help. The boy is lucky enough to find people happy to share their food with him and even becomes part of a group rebuilding a bombed house, piece by piece, for nothing. Sometimes, however, Rodoreda drags us (and the boy) back into the war, where we’re unexpectedly assaulted by soldiers, planes, bombs and, when we least expect it, bodies:

At the lookout point I leaned over the railing and recoiled in horror. Just beneath me was a large, recently-dug pit filled with bodies – legs, arms, heads, guts – and heaps of red earth piled up on the sides, mixed with picks and shovels… the whole in a tangled mess streaked with blood and blood puddles that glistened in the singularly translucent light of that day. I fled, my head spinning. At the top of the path, by the honeysuckle, I vomited, disgorging all my bile.

These occasional visions force us to witness the results of carnage happening off-camera.

War, So Much War is far from a documentary, though. There is a magical air to the whole story. The boy appears to be wandering aimlessly through a quasi-mythical realm, the story consisting of disjointed, grotesque encounters. At times, there is an Alice in Wonderland feel, with Adrià stumbling upon magical mirrors, bubbles in the air and small houses in the wood. This sense of confusion is aided by the structure, with most of the short chapters, just a few pages each in length, bringing a further encounter, a new story to be told. There is also often a gap between them, disconcerting the reader by skipping ahead, leaving us with little idea as to how much time has passed, and occasionally as to whether what we read was a dream or reality.

This feeling of disorientation is underpinned by the language Rodoreda uses. Where the first part uses short sentences that drive Adrià on relentlessly, the second half of the book is far calmer, with longer sentences and more-detailed encounters allowing the boy to find his feet, and catch his breath. Relaño and Tennent have done an excellent job here in reflecting the different pace of the sections and in helping the reader suspend their belief. One reason I wanted to read War, So Much War was because I had enjoyed previous translations by the pair (for example, Imma Monsó’s A Man of his Word, published by Hispabooks), and I certainly wasn’t disappointed by their work here (for more about the translators, take a look at this interview at LitHub).

A picture of a country at war, a bildungsroman set against a backdrop of violence, or a journey of discovery through a fairytale landscape—it is up to the reader to decide what sort of book War, So Much War really is. Adrià spends much of the novel wandering around lost, but one thing he holds onto is a sense of hope:

We lead our lives, all of us, without knowing what awaits us, but the more time you have before you, the greater the hope. It is a fresh life that turns the corner of every new year, and the year that commences might be one of cream or of honey, and then it ends, and the next one is different. I’ve known this since I was a boy: after sorrow, joy.

Yes, there is war (and, unfortunately, so much of it). But if we continue to hope, something better may be just around the corner.

Mercè Rodoreda (1908–1983) is widely regarded as the most important Catalan writer of the twentieth century. Exiled in France and Switzerland following the Spanish Civil War, Rodoreda began writing the novels and short stories (Twenty-Two Short Stories, The Time of the Doves, Camellia Street, Garden by the Sea) that would eventually make her internationally famous, while at the same time earning a living as a seamstress. In the mid-1960s she returned to Catalonia, where she continued to write. Death in Spring and The Selected Stories of Mercè Rodoreda are also available from Open Letter.

Martha Tennent and Maruxa Relaño are a mother-and-daughter translation team based in Barcelona. They have translated, from the Catalan, novels by Blai Bonet, Imma Monsó, and Sebastià Alzamora.

Tony Malone is an Anglo-Australian reviewer with a passion for language and literature. In 2009, he started a review site, Tony’s Reading List , which has developed a strong focus on literary fiction in translation, featuring around one hundred reviews of translated literature every year.