Various Men Who Knew Us as Girls by Cris Mazza 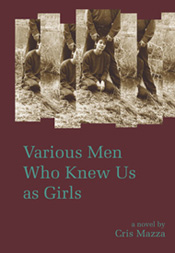 Is it wrong to deny a woman her entrée into adult sexuality? Is it abuse to have sex with a willing partner who is 17 years old? What about 16? What about 14?

Cris Mazza never lets the reader off the hook in this entertaining but deeply unsettling novel about women’s changing sexual lives and sexual expectations from the ’70s to today. Mazza is the author of over a dozen books, including Trickle-Down Timeline, a short story collection that weaves events of the Reagan years with the stories of those who did not flourish. She grew up in San Diego County, CA, and now is a professor in the Program for Writers at the University of Illinois in Chicago.

In this latest work, she illuminates the proverb that “the road to hell is paved with good intentions.”

Her self-absorbed narrator, who presents a carefully chosen pseudonym of Hester Smith, is a failed journalist and failed teacher and failed wife, whose abortive impulses to help and bear witness drive her in two directions over the course of the book. She reaches back to dissect her stillborn attempts to cross from child to woman, propelled by a newspaper article that reveals (to her hot shame) that the man who was assigned to guide her development as a teacher, and who might also have been her guide into sexuality, might have avoided that path because he was having sex with a beautiful blonde teenager. At the same time, she becomes aware that Mexican girls are being prostituted on the grounds, quite literally, of the plant nursery where she works. (Nursery – what a wonderful word to conjure suburban landscapes and childhood, innocence and prosperity!)

She picks up the threads of her damaged past and obsessively re-sorts them, trying to make a whole cloth from the tatters of memory. Might her recollections help or hurt Dan, her former mentor/flame, now on trial for his time in Lolitaville? She works through her reasoning in long, detailed letters. We are provided with analysis of both her awkward disconnections as a sexual being and the imagined erotic experiences of teenaged Heather, who is becoming aware of the power of her beauty and easily dismisses the plain college student who might be her rival. The seduction of Heather becomes more and more graphic, until we are confronted as readers with our own voyeuristic fascination. Meanwhile, an older but seemingly no wiser Hester is peeping at field workers waiting in line for brief sex on the ground, staring from a Porta-Potty “blind” with binoculars. We are lacerated with the knowledge that this is us, watching, uncomfortably massed in the malodorous peep show booth, staring at “Nancy Grace” and “To Catch a Predator” and “Snapped” in shocked enthrallment at the violence and misery, while we make comparison with our own less miserable lives and take no action to assist the pathetic victims whether up close or at a distance. I say “increasingly voyeuristic,” yet when has our society not been horribly fascinated by violence? Images come to mind, the picture postcards made at lynchings, festive occasions with the grinning (white) populace gathered around the charred corpse, or those accounts of hangings in the Old West that served as community gathering, carnival, revival, and street fair all at once.

Hester writes in Various Men Who Knew Us as Girls:

But now, if I don’t lower the literary veil of discretion, I risk stripping away every nuance except sweaty sexual positions between a man and a girl. And even though girl is not an immediate pejorative, and not even an instantaneous sexual crime to have relations with one (who among us doesn’t want to remain a girl, if we’re candid with ourselves, in the lucent darkness of deserted bedrooms?), if the scene is reduced to mere nakedness, wordlessness, genders and genitals, adult and adolescent, the teacher and the taught, I risk the appearance of force, of coercion, of compulsion, of degradation, of corruption, of debasement. And I could be, should be, and supposedly still am writing about all those things happening now, happening still, somewhere, on the rock-strewn ground where the arid afternoon air dries sweat and sperm, maybe even blood, on the inside of her thighs.

Through the memoir are threaded references to productions of “Hamlet” and “Kiss Me Kate” and “Cabaret,” nicely chosen to accentuate both Hester’s indecisiveness and the covert sexual playground at Mt. Marcos High School, where teacher and student vie for the affections of surfer/master teacher Dan. The threat of discovery hangs over them both, a thrumming background threat, much as the Master of Ceremonies presides over the Kit Kat Klub.

Near the end, Hester speaks directly to her readers/critics – “Enough already with the delayed adolescent angst, give me real substance about misery in the real world!” As though we were not aware of, and unresponsive to, that misery in our own hometowns – and our own lives.

Cris Mazza is the author of nine novels, four story collections and a collection of essays. Mazza has taught fiction writing at UC San Diego, and was Writer in Residence at Austin Peay State University in Clarksville, TN, then at Allegheny College in Meadville, PA. Since 1993 Mazza has lived outside Chicago. She is a professor in and director of the Program for Writers at the University of Illinois at Chicago.

Valerie Nieman’s third novel, Blood Clay, is newly published by Press 53. She is the author of a collection of short stories, Fidelities (West Virginia University Press), and a poetry collection, Wake Wake Wake. Her fiction has appeared in The Kenyon Review, Green Mountains Review, Arts & Letters, and the recent anthology Degrees of Elevation (Bottom Dog Press). She has received an NEA creative writing fellowship and the Greg Grummer Prize in poetry. A native of western New York State, she graduated from West Virginia University and the M.F.A. program at Queens University of Charlotte. She teaches writing at N.C. A&T State University and is the poetry editor for Prime Number.