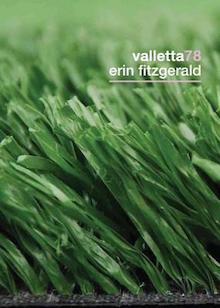 Erin Fitzgerald’s debut novella is, first and foremost, an ode to crying out into the techno-void during this early part of the internet age. If it’s possible to sum up the book in just one line, it’d have to be: Valletta78 is the story of people who need people but keep them forever at arm’s length.

The internet is a useful means to this end, as the title character proves.

Told primarily as the first-person narrative of a woman operating under the username Valletta78, we are led into her carefully managed world of email exchanges with self-help forum moderators; private chat room sessions with a fellow insomniac-turned-romantic-interest whose username is Winfield; and reflections on her day-to-day experiences with her husband, Brandon; her psychologist, Dr. Martin; and the strange prefabricated community in which she resides, Valletta.

If the internet was designed to connect the world, why do its users seem even more isolated, more alone, despite their constant communication, than they are in their lives outside the web? Their lives outside are lonely indeed, adding to this paradox, one Fitzgerald intensely explores.

There’s a particular moment in the book that illustrates the relationship between these characters quite well (and the overarching narrative theme of technological loneliness that colors the novella), when during one of many a private chat room session between Valletta78 and Winfield, the characters have the following exchange:

This passage tersely demonstrates a feature of the instant message era: the ability to choose to respond or not respond to a chat companion at any given moment. What would generally be considered rude or at least inattentive in a conventional conversation, is entirely acceptable in this format. Valletta78 owes nothing to Winfield in that sense.

These kinds of detached relationships aren’t unique to the internet, of course. Early on, we are introduced to Dr. Martin, who exists largely as an abstraction, always talked about but never active in any scene until one near the story’s end. He has in this sense a kind of omnipotent quality, as the sounding board of every truth Valletta78 wishes to tell:

At the very least, there’s a feeling Dr. Martin has the power to absolve Valletta78 of her sins, and offer her some kind of penance. When we do finally get our glimpse of the man, we see someone who is as human as anyone else. His special power is nothing more than that he is paid to listen. The man seems as aloof as any deity, compassion once again eluding Valletta78.

We are given a clear view of what the community of Valletta is and what it represents to the title character. She sees in it a setting of contrasts, a place of optical illusion. She says, “…I saw that [Valletta] was supposed to feel big and clean and friendly. The yards in my new neighborhood were small, so the houses looked big. The parking lot at my new grocery store was small, so the cars looked big.” All around are constructs designed to alter a person’s sense of proportion, for the benefit of those who have manufactured Valletta. It seems a fitting metaphor for Valletta78’s online reality, in which she can sculpt her own characters who are as large and small as she likes.

Fitzgerald shows us the dichotomous lives her protagonist lives most keenly in the form of the protagonist’s husband, Brandon, who becomes her cancer-stricken brother in the fictitious life she has formed online. Brandon in-real-life (irl) and the Brandon who is exclusive to her online persona, Valletta78, share very little in common. One could make the argument that they both have dissatisfying relationships with their respective significant others, but beyond that, little else is the same.

Valletta78 is a very sympathetic character in this regard, despite the lies she perpetuates and her willingness to take advantage of the insomnia-help forum she visits nightly. There, she cultivates “Brandon” and his struggles with cancer, inventing new problems for him designed to elicit their sympathies (drama with an equally fictional girlfriend, Darlene, chief among them). The forum moderator in particular sends gift cards and baked goods to the P.O. box she’s made for ”Brandon”.

All of this would be far more terrible if Valletta78 seemed to take real pleasure from her misdeeds. But it never feels that way. She seems to believe in the “Brandon” of her creation, certainly far more than Brandon (irl). This all comes out in her slightly more earnest moments with Winfield, for whom it’s clear she feels real affection.

The climax of the story comes when Valletta78 faces the choice of leaving Brandon and pursuing her relationship with Winfield to its only logical end, by meeting irl. She will be confronted with the reality that she’s not the only one capable of pretending to be someone else. Winfield may be less real than a snowflake melting on her car windshield.

The story comes to an ultimately sad though entirely rewarding conclusion. Valletta78 is not so much undone by her experience – the loss of her online world – but she becomes more careful, seeming ready to start afresh and construct a new and better online reality, all over again.

The internet affords people like her such opportunities, and she knows it always will.

Erin Fitzgerald is the author of “This Morning Will Be Different,“ which appeared in Shut Up/Look Pretty (Tiny Hardcore Press, 2012). Her work has also been published in Hobart, The Rumpus, Salt Hill, PANK, and several anthologies. She lives in western Connecticut, and online at erinfitzgerald.net.

Matt Rowan lives in Chicago, IL, with a talented female writer and two talented chihuahuas. He co-edits Untoward Magazine and serves as fiction editor of ACM: Another Chicago Magazine. He is the author of the collections Big Venerable (CCLaP, 2015) and Why God Why (Love Symbol Press, 2013). More at www.literaryequations.blogspot.com.