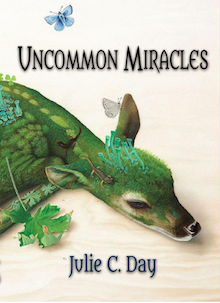 At the first glance, Uncommon Miracles is surely a somewhat tautological title. This impression, however, diminishes as one progresses through the collection. We are introduced to worlds casually populated by ghosts, benevolent and not-so-benevolent spirits, magic, travel in time and across dimensions. In such worlds, it is the quiet, often understated, moments of human drama that make up the eponymous miracles, and these are indeed rare — whether they represent a turning-point in a character’s life, a long-awaited resolution, a realisation, or simply a re-affirmation of their positions.

Occasionally, it remains ambiguous whether the magical elements in the story are truly “real” in the fictional world, or whether they are the characters’ attempt to articulate their struggles in metaphorical supernatural imagery. It is not a coincidence that often supernatural elements show up in moments of crisis. In “The Woman in the Woods”, a child refugee from an unnamed cataclysmic event struggles to make sense of the concept of time. Between the memory of her pre-disaster home and an ever-receding hope that a return can bring an end to her wanderings, subjective time seems to perpetually dilate and lose its meaning as its boundaries become unclear, and the appearance, in glimpses and changing flashes, of the ghostly woman in the woods, punctuates this dissolution of past and present alike. Sometimes the supernatural elements are responses to needs of the characters. In “Finding your Way to the Coast”, a recent widow seeks the company of a man who displays traditional demonic attributes, because he is able to conjure up ghosts and she is desperately seeking a reunion, however brief, with her late husband. In “The Faces Between Us”, the living, aimless and pleasure-seeking as they drive through seemingly endless stretches of desert, dream of a fairytale ending, “a path through”, which the ghosts occasionally provide to a chosen few once their ashes are swallowed or snorted like drugs. Still, it is beside the point whether the supernatural is real or not — either way, it appears as the great and unknown “beyond” that the characters’ trapped condition often demands.

But most of the time the stories are set in worlds operating according to their own intrinsic and alien (from the reader’s perspective) logic, which the reader is plunged into with few explanations and left to figure out everything on her own. However, the characters’ arcs, although inevitably a function of the idiosyncratic worlds they live in, are recognisable as universal human struggles. “The Re’em Song” has its own mythology, history and sociology, with a degree of complexity worthy of long-form fiction, which is all the more impressive here for being so concentrated. Long ago, unicorns freely roamed the earth; they have all but disappeared, and the amount of magic in the world, the basis of all economy, is a quickly vanishing resource. Valley people are few, reclusive, sullen, make a harsh living digging up magic bones amidst the ghosts of the dead unicorns; city people are numerous, energetic, trade in the blood of domesticated unicorns, and have lost contact with the ghosts that remind humanity of its inevitable decline. Nevertheless, the protagonist’s story is a familiar progression from estrangement in the midst of her narrow valley world, through an attempt at leaving, up to acceptance of it. Similarly, in “Pretty Little Boxes”, feelings can be stored in boxes, bought and sold; the political and economic elite known as the Grey Witches manages and controls the collective flow of boxed feelings. The viewpoint character starts out being able to cope with her chronic sadness only by packaging and selling it, and the end of the story finds her as the sole occupant of a life-size box waiting to be opened, in a final gesture of both self-annihilation and self-acceptance.

Most of the time, the magical element of the stories appears as a way of articulating, delivering, enhancing or symbolically conveying a simple, basic emotional core. A grieving photographer struggles to come to terms with the death of his wife — so he uses the ghost-conjuring power of photographs and of his own flesh to populate his house with ghosts, hoping to find his wife among them (“A Pinhole of Light”). A young man well-versed in astronomy thanks to his parents finds himself in a race against his brother to create a portal which may provide them access to the different universe in which their parents live after passing away. Accustomed to feeling inferior to his brother and yearning for the parents’ approval, the main character treats this mission like a desperate attempt to resolve his complicated relationships with all his family members (“Holes in Heaven”). A man is offered the opportunity to monetise his ability to travel in time through car crashes — but his obsessive car-crashing has only one aim, the single-minded desire to return to a past lover (“I want to be here”). In one of the stories where the fantastic is used quite transparently as a symbol for a psychological process, an eight thousand-year old creature, monstrous and destruction-hungry, inhabits the body of a fifteen-year-old girl who has experienced parental abandonment and neglect, has witnessed the suicide of her best friend’s mother and the friends’ subsequent self-harm. The creature’s departure coincides with the protagonist’s realisation that life, though difficult, must be embraced, not abandoned.

Most of the viewpoint characters are women, and their complicated relationships with men and maleness are often the focus of the stories. In “Signal and Stone”, the two protagonists, Hazel and Edith, are each tormented by her own male ghost, symbolising the consequences that come with pushing the acceptable boundaries of womanhood. Twenty-first century Hazel, yearning for attention that she doesn’t get from her parents, gets her first admirer, known as “Ghost Boy”, a spirit who resides in WiFi networks, communicates via instant messaging, and whose admiration soon turns into sexual aggression. Decades before, Edith created a male alter ego to enable her to practice stonecarving, only for the spirit to turn vengeful once it is driven into exile by Edith’s forced integration into the feminine gender role. One of the longer stories in the collection, “Idle Hands”, follows three generations of Vieira women. They reproduce parthenogenetically but are drawn, almost as a matter of biological imperative, to a self-proclaimed traveller between parallel universes, Joseph, who also seems never to age. A predatory figure, Joseph enables the women’s “travelling” via heroin use and facilitates their eventual disappearance, providing himself with a perpetually-renewing supply of Vieira women across multiple universes. The addiction metaphor is obvious, but it does not warrant a reductive reading of the story, which swings tantalisingly between a glimpsed-at image of an all-female utopia and the masochistic pleasure of giving in to predatory masculinity, ultimately achieving a predictable, but still satisfying resolution as the youngest Vieira woman frees herself in the end.

Most stories convey a sense of immediacy by being written either in the first-person, present tense, or in a third-person limited perspective. There is a constancy of style throughout, but the voices of the different viewpoint characters throughout the collection are well-individuated and believable (children’s perspectives are especially nicely realized). Language constantly hovers between metaphor and literalness, the reader often being not quite sure whether it is internal, psychological events, or external, supernatural ones being referred to, as this fragment of internal monologue of a character who deals with literal and metaphorical ghosts from the past exemplifies: “Delia shifts in her seat. Anxious. It’s dark behind her closed eyes. And Peter’s ghosts have such sharp edges. She can already feel her skin loosening as they tug at her flesh” (“Finding Your Way to the Coast”). There are occasional stylistic exercises which depart from the norm: “The Thirteen Tuesdays of Saint Anthony”, for instance, is written in the formal and stilted language of a grant proposal. While the majority of stories display traditional structures, others exchange plot for quasi-lyrical elaborations on a single theme or set of themes: there is a collection of vignettes which develop in increasingly exaggerated imagery the same theme of female revenge on unworthy male lovers (“Level Up”), and an unusual depiction of various kinds of grief in the language of food (“Mourning Food: Recipes Included”). In this type of stories, rich, deceptively concrete imagery masks highly abstract meditations which resist summarizing: “You were the wolf, the witch, the unnamed monster in the woods. Instead of blood offerings, the townspeople left you woven baskets full of waxy red fruit. I left myself: red cape and fiery virgin blood. I was the one who lifted my hand and knocked. I had black hair, dark as a raven, and the dress my mother had sewn for me” (“Raven Hair”).

When the stories do have plots, despite their unconventional subject matter, they all have relatively traditional structures. Their chronology is mostly linear, although a few, like “A Thousand Paper Cranes”, move back and forth between different timelines. Day’s skilful use of free indirect speech enables her to blend seamlessly exposition, narrative and psychological analysis, e.g., “Horace’s fingers were skeletal thin and oh so hungry. His eyes dark as empty holes. Once upon a time, before the scream of metal against metal had mixed with all those other screams, before she and Horace and the Orphan Train had arrived in the woods, Horace had been different. Back then, Horace had loved the hills on the west side of Manhattan almost as much as he loved these woods” (“The Woman in the Woods”). Open endings are few and far between. Most often, endings do provide resolutions for the main characters, not in terms of achieving the desire(s) that set the events of the plot in motion, which are in fact more often than not frustrated, but rather through acceptance of the main characters’ condition: e.g., “I am the camera, the lens, the opening through which all light must fall. I am a true photographer. I can let go of a broken image and move on” (“A Pinhole of Light”).

Uncommon Miracles is a varied collection. Some stories take place in fantastic settings or in anonymous spaces that may well be any place or none at all; in others, the fantastic seeps through realistic and identifiable locations, blending effortlessly with them. Flying creatures inhabit swampy, half-abandoned, once-prosperous cities in Florida; the dry, dusty stretches of Oregonian desert are traversed by long empty roads, from the side of which ghosts hidden in stones silently watch; the fetid heat of Arizona is where the decay of organic matter can be turned into a portal to the heavens. Regardless, it is always the intimate inner lives of characters that are the focus. Towards the end of “Florida Miracles”, the 15 year-old protagonist summarises this general approach as she meditates on Mrs. Henry, the supernatural being who has been inhabiting her for all of her life: “God, I missed so many things. Despite her fifteen, or fifty, or eight thousand years, Mrs. Henry is no miracle. This entire time, it’s our lives […] that have been miraculous”.

Born in Darlington, England, Julie C. Day now lives in a small town in New England with her family, a menagerie of variously sized animals, and a cozy amount of clutter and dust. She holds an MFA in Creative Writing from the University of Southern Maine and a Masters of Science in Microbiology from the University of Massachusetts. Julie is also a graduate of the Banff Writers’ Conference, the Viable Paradise Writers’ Workshop, and the Yale Writers’ Workshop. You can find her @thisjulieday.

Laura Nicoara is a first year PhD student in Philosophy at the University of Southern California. Her research interests include ethics, aesthetics and the philosophy of literature. She has previously lived and studied in Romania, the UK and Hungary.