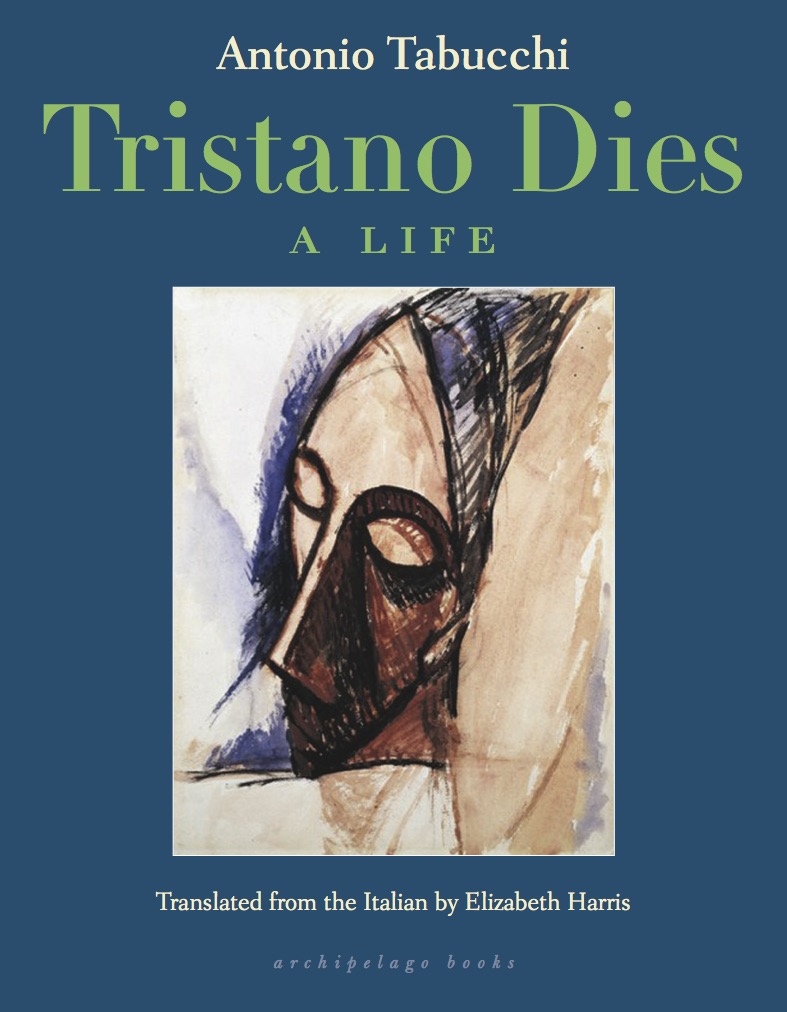 Tristano Dies is the latest in the collection of works by Italian writer Antonio Tabucchi published by Archipelago Books. The novel takes place in Italy one hot August, with a successful author visiting Tristano, a hero of the Second World War Italian resistance. Having already imagined parts of the man’s life in a short work, the writer has now been summoned to hear the real story – and a wonderful tale it is, too.

Over the course of the last month of his life, Tristano, doped up on morphine to help him cope with the pain of the gangrene that is slowly devouring his leg, recalls the events of his youth, returning to the 1940s and the major turning points of his life. What ensues is confusing and enthralling, a collection of dreams, tangents and memories, with the writer, and the reader, struggling to make sense of the old man’s drug-addled ramblings. Perhaps, though, there is a reason for Tristano’s reluctance to reach the end of his tale; quite apart from its being the last thing he ever does, it seems there may be parts of the story he doesn’t really want to tell.

The Italian soldier’s life as a resistance hero begins when he witnesses Nazi attacks on the people of a Greek village and guns down a German officer in disgust. On this day he also meets the first of two women who recur throughout his story. Daphne, or Mavri Elià, a woman with “eyes like black olives”, hides him from the Germans until he can escape into the hills. Later, he encounters Marilyn, an American soldier aiding the resistance movement, a woman he renames Rosamunde or Guagliona, depending on his whim. In the midst of Tristano’s dream-like recount, the women appear and vanish, recurring themes rather than people, leaving the reader unsure as to which one meant more to the Italian freedom fighter – or whether they existed at all.

As much as Tristano Dies is about the past, though, it is also a novel of a confrontation between fiction and reality. With his days numbered, the old hero is desperate for his story to be heard:

…in your novel, you really make Tristano out to be a hero, but he’s afraid, too, and this I liked, heroes are afraid, the simpletons might not know that, but he overcomes his fear… there’s another twist, though – and here you’ve done something really clever – because maybe he’s managed to overcome his fear because his fear is overpowering?… in short, the hero overcomes fear because fear overcomes him.

While impressed with the writer’s take on his life, Tristano senses the importance of telling his side of the story, knowing that the words left on the page will affect how people remember him after he has gone. How accurate these words are is another matter entirely.

Part of the charm of the book is this meeting of the minds, the (silent) writer coming face-to-face with his subject, fiction and reality colliding head on. Tristano uses the opportunity to discuss much more than his own story, the drugs and fatigue pushing him to expand on whatever thoughts pour into his head. The old man realizes that he loses the thread at times, but it is nothing he is about to apologize for:

Am I waxing philosophical? Say something – no – just let me talk, all right? You intellectuals, you’re always philosophizing, always explaining the world to us, everybody’s always wanting to explain the world…

With these words Tristano seems to be criticizing the writer’s role in simplifying complexity, insisting on making sense of events that may defy comprehension.

This accusation is slightly ironic when you consider that Tabucchi uses his novel to do exactly this. While not overly explicit in its political criticism, Tristano Dies uses the main character to voice the author’s frustration with post-war Italy, hinting at the guilty secrets of the Italian past, including a widespread tacit acceptance of fascism. The writer is told that the past is too dangerous for normal people to think about:

…don’t think, remember not to think, let me think for you, Tristano, you fought for freedom and freedom’s come: it’s being liberated from thinking, no longer thinking… real freedom’s when you’re thought.

As Tristano vents about the delightfully named ‘pippopippi’, the televisual opium of the masses, he explains how the distractions of the entertainment world keep the ordinary folk numb (at which point it is hard not to be reminded of Italian game shows and Silvio Berlusconi’s various escapades…).

As entertaining as the old man’s story is, though, the appeal of Tristano Dies lies just as much in the writing as in the plot. Consisting of one lengthy monologue, the story rambles along with its mesmerizing, never-ending sentences relentlessly pulling the reader along. This is very much a spoken text, and Tristano’s natural storytelling capability (aided by the liberal doses of morphine he receives) leads to a heady mix of dreams, memories and random anecdotes on Italian history. However, the dying man’s tale can become extremely involved, with clever allusions and literary references (ranging from Greek and Germanic mythology to Samuel Beckett) rubbing shoulders with evocative memories of hot Greek summers.

What struck me soon after starting Tristano Dies were the similarities with another Archipelago title, namely Wiesław Myśliwski’s Stone upon Stone (winner of the 2012 Best Translated Book Award), another novel with the Second World War in the background. This was particularly true for the rambling, uninterrupted monologue, a feature that must have posed a challenge for translator Elizabeth Harris in terms of finding, and maintaining, the appropriate voice. However, she has met this challenge beautifully, with the tone of the dying man consistent throughout the novel despite his many changes in mood – from happy to cantankerous, apologetic to commanding, often in the space of a few lines. An interesting and engaging work, there is every chance of its featuring on next year’s BTBA longlist, continuing Archipelago’s success.

Even if there is just as much here about his life, Tristano Dies is, as the title suggests, primarily concerned with the old man’s death and the way he chooses to face up to it. Early in the novel, the old man tells the writer about the way dying elephants choose a partner to accompany them on their final journey, and it is clear that the writer is Tristano’s fellow traveler on this path. If the author is hoping to learn some final secrets, though, he might be disappointed:

You came here to find out the answers to Tristano’s life. But there aren’t any answers to life, didn’t anybody tell you?… why write? Or are you one of those, the kind looking for answers, wanting to put everything in its place?

For the reader, of course, searching for answers in Tabucchi’s work is all too tempting, but there is far more to the book than that. Tristano Dies, like life itself, is less about the destination than what happens along the way, and its readers (like the visiting writer) are sure to be happy with the journey.


Antonio Tabucci was born in Pisa in 1943 and died in Lisbon in 2012. A master of short fiction, he won the Prix Médicis Étranger for Indian Nocturne, the Italian PEN Prize for Requiem: A Hallucination, the Aristeion European Literature Prize for Pereira Declares, and was named a Chevalier des Arts et des Lettres by the French Government. Tabucchi’s works include The Flying Creatures of Fra Angelico (Archipelago), The Woman of Porto Pim (Archipelago), Little Misunderstandings of No Importance, Letter from Casablanca, and The Edge of the Horizon (all from New Directions).

Tony Malone is an Anglo-Australian reviewer with a passion for language and literature. In 2009, he started a review site, Tony’s Reading List , which has developed a strong focus on literary fiction in translation, featuring around one hundred reviews of translated literature every year.