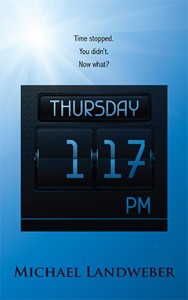 Michael Landweber’s Thursday 1:17 p.m. is an Eleatic thought experiment. Parmenides of Elea believed that reality (“what-is”) was timeless, unchanging, unmoving and it was only our illusory experience of it that was in flux. The world only seemed to flow on, progressing toward some human end, when in reality, it was static, frozen in an eternal perfection. To see the world as-is, we needed to stop and look at it like a photograph.

Such is the snapshot Thursday’s protagonist, Duck (nicknamed for the amphibious vehicle his father commandeered in a manic rampage), will get a good look at on the day his mother dies. At precisely 1:17 p.m. on this day before his eighteenth birthday, he walks out into traffic and (by design?) is struck by a passing car. Immediately thereafter the entire world freezes and Duck is left to wonder if he is dead or unconscious or the gears of the universe have simply ground to a halt?

Billed as a how-to guide, reminiscent of Charles Yu’s How to Live Safely in a Science Fictional Universe, the author takes us through what we’ll need to know and how we might feel when the world stands still. The first thing you’ll notice when you are the sole activity in the world, he says, is the lack of sound:

With no outside stimuli, the eardrum, the cochlea, those three little bones, the nerves, with a generous assist from your reeling brain, will all turn their attention inward. Seeking out sounds, finding them in the workings of your body, which unlike the world around it is still a chaotic amalgam of movement and frenetic activity. Blood courses through your veins, creating that dull roar in your head. Your heart still beats like a pile driver, especially when you panic, which will happen often. Air rushes in and out of lungs like a hurricane. Knuckles crack, intestines gurgle. Even the flutter of eyelashes whispers like a breeze through a weeping willow.

Eventually, the novelty wears off and your ongoing existence necessitates a method, a mode of going on. You still need to eat and drink and occupy your “time.” The upside being that in a world of suspended animation, you can do pretty much whatever you want without consequences. What Duck really wants to do is ravish the most alluring others and yet he cannot bring himself to accost these unmoving, ostensibly unfeeling and defenseless bodies. He recalls his philosopher father telling him that there is no morality in a vacuum, no meaning without the reactions of other people in time (Sartre is a cited ghost in this narrative machine). But Duck discovers that even when there is only himself and his interior monologue, the constraints of morality still apply. Perhaps Landweber refused to write this transgression, because it would be an immoral indulgence on the part of the author. In other words, fiction is not a libidinous free for all, but rather has its own laws, ethics, etc. Narrative parallels of the frozen and fictional universe lead one to believe this struggle may actually have occurred in the alternate reality of the author’s creative mind.

Even in a world where nothing is happening around you, you’ll need a purpose, a mission—an end to lure means. Duck cannot simply wander around experimenting in this novel realm. A being formerly subject to time and space, Duck falls back on his back story. Where, after all, are his parents, friends, love interest? Are they frozen too? Maybe he needs to find them to set the world in motion again?

He recalls a gut-wrenching incident from his mother’s final days, having to help her go to the bathroom:

What had happened … would not be repeated. Once I told the nurse, diapers and bedpans appeared. More indignities.

We were still. Each in our own way considering that this moment would redefine far too much of our past, driving out an unacceptable number of fading memories….

He considers the madness of his father, who currently resides in a mental hospital:

I longed to be part of the monologue in his mind, to plug my earphones directly into the back of his brain and just eavesdrop … Inside him, there were different tracks, separate competing realities, each one equally real, all entwined together, connected by a coherence that only he could navigate.

He thinks of his inamorata, Mackenzie, and their mutual friend Carlos, who may or may not have slept with her. Reconsidering the nature of these triangular relationships, he begins to wonder where he stands with them. He actually encounters an animate Carlos, who directs him in an episode of mischief and mayhem. Hopefully it’s not a spoiler to note that there is a Fight Club reference in this passage.

And then there’s Grace. A friend who, in retrospect, was perhaps more than a friend? After reexamining his feelings and their history, Duck goes to her house and finds a letter she’d written to Carlos, which drops two bombshells into the narrator’s life and narrative. Ultimately, Thursday 1:17 p.m. will prove to be the protagonist’s search for Grace (the girl, the state) in a petrified world. A tale of teenagers, the novel’s style, tone, and action are fittingly YA, belying the philosophical gravitas. One can almost hear the Modern English anthem “I Melt With You” (“I’ll stop the world and melt with you”) soundtracking the cinematic freeze frame of the novel’s climax.

The wallpaper my father had created was at least four, five, six layers deep. Even the window had been covered over, filtering the bright light through the haze of my father’s search for meaning…. The world needed to be covered up, papered over.

Michael Landweber lives and writes in Washington, DC. His short stories have appeared in literary magazines such as Gargoyle, Fourteen Hills, Fugue, Barrelhouse, and American Literary Review. He is an Associate Editor at Potomac Review and a contributor for Pop Matters. Click here to find Michael online.

Steven Felicelli is the author of two novels: Notes Toward a Monograph of the Moment (Six Gallery Press) and White (Purgatorio Press) and a variety of other publications, from film reviews to the co-translation of a Japanese folk song for The United Nations. He was born in Chicago and now lives in the San Francisco Bay Area (by way of St. Louis, Seattle, Santa Fe) with his wife Anita Felicelli, author of Sparks off You and their three children.