Three Floors Up by Eshkol Nevo 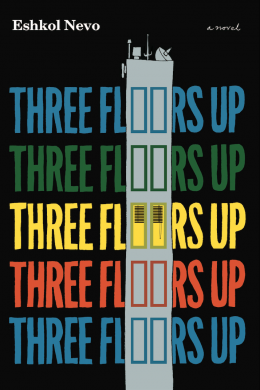 Examining society’s ills via the metaphor of an apartment building is not a new venture, but it works every time: from J. G. Ballard’s High Rise to the Yacoubian Building of Egyptian writer Alaa Al Aswany, from Bernard Malamud’s urban ghettos to the famous address of 11 Rue Simon-Crubellier in Paris by Georges Perec. The apartments teeming with life, gossip, and opinions are an excellent microcosm of the city or the country at large, an endless source of satire and social observation.

Israeli writer Eshkol Nevo’s Tel Aviv seems like a very modern city, yet there are hints of an unquiet past everywhere you look. The inhabitants of this apartment block with the three floors of the title in a quiet suburb of Tel Aviv are no exception. Within the novel, the story of each floor is distinct, yet there are moments when the characters meet tangentially—even collide.

On the first floor we find Arnon, his wife Ayelet, and their two daughters Ofri and Yaeli. Opposite them lives a retired couple of German Jews, Herman and Ruth, whom Arnon‘s family has been using as cheap babysitters. At first it is a little luxury so that they can spend a little time on their own, but when their second child is diagnosed with various health problems and has to be frequently hospitalized, it becomes a necessity and they rely more and more on their neighbors. Herman is starting to show signs of dementia, and the overly protective Arnon fears that he may be showing an unhealthy interest in the young girl. When his older daughter goes missing one day, his fighter instincts kick in, hurting everyone involved and resolving nothing at all. It might be too much to read a political statement into this, of political stalemate in the Middle East. However, Arnon’s occasional asides about the Intifada and fighting in Hebron or Gaza support such a theory. This is a man who has been conditioned to jump to conclusions, to kill or be killed, but we do feel some sympathy for his predicament…even when he keeps on making things worse for himself.

On the second floor there is Hani and her children. She is known as “the widow” to her neighbors because her husband is constantly away on business trips. She is feeling lonely and lost in the suburbs, and has little in common with the other mothers she meets at the school gates. She fears she may be losing her mind, as she starts arguing with an owl she firmly believes she can see in the tree outside her window. And what will happen to her if one day there are two or even three owls there? Her bland life is crying out for disruption and she certainly gets that when her con man brother-in-law suddenly appears on her doorstep and asks for refuge. She agrees to take him in, although she knows he is on the run from both the police and loan sharks.

Finally, on the top floor, we have Devora, a real widow and recently retired judge. She misses her husband terribly and is estranged from her son, so her life is a very lonely one. As we gradually find out more about what led to this estrangement, we realize that she subdued her real nature considerably to fit with her husband’s expectations. In a fit of rebellion, she decides to join the young demonstrators on the streets of Tel Aviv. She meets an enigmatic man there, Avner Ashdot, who seems to know a little too much about her. She worries that he may have been a perpetrator whose case she tried. She gets even more anxious when he tells her that he once worked for the Ministry of Defense.

The book is divided into three sections, each representing one of the floors of the building. Each section is told in the first person, in the form of a conversation between the protagonist and someone close to them. Arnon discusses his predicament with an old army friend, the only one who can understand his violent impulses. Hani is writing a letter to an old school friend, who knows of the hopes and dreams she once had. Devora leaves messages on the answering machine, the only place where she can still hear the recorded voice of her dead husband.

While each section is a self-contained unit, there are areas of convergence, where the storytellers meet and we get a chance to see them through each other’s eyes. This raises additional questions about how well we know (or wish to know) our neighbors, as well as the possibility of creating a sense of community in a country where individual backgrounds and past experiences can be so diverse. There are certain elements here which seem specific to the Israeli context. The sense of paranoia, the fear of neighbors being ready to inform on you, is tacit in each of these stories, not only when Hani provides refuge for her fugitive brother-in-law. Devora too is deeply suspicious:

I was vigilant…I was constantly vigilant. After all, both you and I have sent smooth-tongued, nattily dressed scoundrels to prison after they exploited their victims’ naiveté in all sorts of scams…I didn’t forget that for a moment. Right, left, trepidation, left, right, suspicion. That was the rhythm of my steps as I walked beside Avner Ashdot.

Another theme running through this novel is: to what extent do we favor family over society and its rules? As described by Nevo, the characters who stick to principles and regulations seem to be the least sympathetic—the spouses, most often than not. Admittedly, their opinions are never revealed directly; they are filtered through the protagonists, who are flaunting society’s rules. There are hints that it might not be a good idea to take for granted their points of view. After complaining about her husband’s lack of parenting skills and inability to understand her, Hani reveals in her letter to her friend that the situation is more complex than she had described it:

I don’t know. Maybe I got a bit carried away while I was writing…We have quite a few good moments that I kept from you in this letter. The truth about our marriage is much more elusive than what I described here. And then there is the financial truth.

This is a thought-provoking book, but it remains very accessible and fun to read. Although each section can be read independently, it is anything but a loose collection of stories. There is a uniform atmosphere of mystery and foreboding, with a barely concealed threat of violence. Readers will need to read the novel in its entirety to fully appreciate the gradual build-up of unease, while the ending provides a solution for some, but not for all.

Eshkol Nevo is the author of five novels, all best sellers in Israel. Three have been published in English: Neuland (2014), which was included in The Independent‘s list of Books of the Year in Translation; World Cup Wishes (2010); and Homesick (2008), a finalist for the prestigious Independent Foreign Fiction Prize. In 2008, Nevo was awarded membership in the Israel Cultural Excellence Foundation. He is the owner and co-manager of the largest private creative writing school in Israel and is mentor to many up-and-coming Israeli writers.

Sondra Silverston has translated the work of Israeli fiction writers such as Etgar Keret, Savyon Liebrecht, and Aharon Megged. Her translation of Amos Oz’s Between Friends won the National Jewish Book Award for fiction in 2013. Born in the United States, she has lived in Israel since 1970.

Marina Sofia is a global nomad, reviewer, and writer, currently calling the UK home. She is Marketing Manager for Asymptote Journal for world literature and a regular contributor to Crime Fiction Lover. She has published poetry in online and print journals, which is a wonderful procrastination when she should be working on her novel.