Theories of Forgetting by Lance Olsen 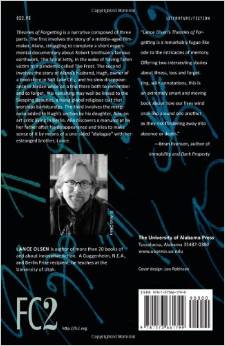 Lance Olsen’s novel Theories of Forgetting takes the reader on a journey through illness, memory, time, and the form of the printed book. Olsen teaches experimental narrative theory and practice at the University of Utah, and he has said that Theories of Forgetting was inspired by the Spiral Jetty, Robert Smithson’s famous earthwork constructed in 1970 on the shores of the Great Salt Lake.

Theories of Forgetting is two novels in one, or perhaps a single novel divided into two parts. One part relates the tale of Alana, a woman in Salt Lake City who is making a documentary about the Spiral Jetty. Alana has fallen ill with the Frost, a new illness which affects memory and language; as the story progresses, her condition worsens. The other part relates the story of Alana’s husband, Hugh, during her illness and after her death. A third voice is present: the couple’s daughter, Aila, who annotates Hugh’s story.

The physical book reflects the divided point of view: Theories of Forgetting has a style of binding known as tête-bêche (head-to-toe). There is no front cover; instead, two back covers face the reader, which comes across as both informative and inscrutable. Alana’s story is set in Garamond, Hugh’s in a typewriter font, and Aila’s notes in a font that looks like handwriting. In most books bound head-to-toe, each part begins at one end, and the two meet in the middle. In Theories of Forgetting, the story lines share the page: Alana’s story runs one way, extending halfway down the page, more or less. Flip the book over, and you read Hugh’s story, also extending halfway down the page, more or less. It’s not a palimpsest — the parts don’t obscure each other. They share the space, but they don’t touch. It’s like a marriage.

As you turn each page of Theories of Forgetting, you have no idea what you’ll see next — how much text will be Alana’s, how much Hugh’s, and what space may be occupied by a photo, drawing, newspaper clipping, or Aila’s commentary. In our age of hyperlinks, when we move so easily online from one story to the next, Theories of Forgetting reminds the reader that you can’t read everything at once. (While reading Theories of Forgetting I entertained the fantasy of reading multiple copies of it on the 16th-century wooden device called a book wheel — a rotating bookcase resembling a water wheel that enabled scholars to keep many books open at once.)

As her story begins, Alana is in denial about her symptoms. “You keep telling yourself it will go away. Of course it will go away. Things like this go away all the time. That’s what things like this do.” She can’t bring herself to say anything to her husband: “I’ll think: I should turn and tell him.” As Alana’s condition worsens, Hugh reacts to her forgetfulness and confusion. “The man started wondering if maybe he were the one whose memories were glitching. Who could say? Who could be used to triangulate the situation? Maybe he was the one getting existence wrong.” Alana comes to acknowledge the place of illness in her life, while still resisting it: “grasping completely, piercingly, that someday something will go wrong, terribly, it always does, there’s just no escaping it, that’s how every story ends no matter how you try to outwit its narrative arc, but not now, no, right?”

The evanescence of language, speech, and writing in Theories of Forgetting may evoke the disappearance and appearance of the Spiral Jetty, which was below water from 1972 to 1993. One symptom of the Frost is to get words wrong but in meaningful ways: “ where” as Alana writes. Whereas Alana always comes up with a word even if it has to be corrected, Hugh’s elderly grandfather offers unfinished sentences and absent words:

“The thing you say before you say You’re welcome,” he would say.
“The other word for automobile.”

As these moments show, Theories of Forgetting is not so much about theory as about the practice of reading and writing, remembering and forgetting. The reader shares in these successes and failures of memory and communication. The head-to-toe structure doesn’t provide typical novel-reading cues. What does it mean when a character does one thing, then another thing? I glommed onto bits of characterization the way the characters themselves study the selves they appear to be losing. After Alana’s death, Hugh travels the world with one of her dresses in his luggage. In a hotel room far from home, he puts on the dress in an eerie and affecting scene:

It’s fascinating—how the material falls, how his hairy legs appear to be someone else’s.
He can’t stop paying attention.

And every so often, I’d return to the cover text, which provides such a cogent, reassuring summary of the two parts of the narrative. Point of view lets the reader in on Alana’s and Hugh’s stories; it also isolates Alana and Hugh from each other. It is like a marriage.

Pay attention to Theories of Forgetting and the two narratives start to speak to each other, head-to-toe. Early in Alana’s story, for instance, she recalls the day she noticed a guy noticing her as she, a young art student, sketched on a university lawn. She “could tell that initiating a conversation with her was one of the bravest acts he had ever undertaken.” Late in Hugh’s story, we learn more: he’d known a girl in high school who went on to study art and who committed suicide. The day he learned of her death, he saw a woman at the university, sketching — Alana. “On any other afternoon he would have kept walking. The idea of striking up conversations with women he didn’t know tasted like chewing on nickels. But this time he made an exception.” It’s not clear whether Alana ever knows this. But we know. In a moment like this, we see the shape of the spiral emerging through the water — two stories forming a third that is not contained by the physical form of the book.

In Alana’s story, Smithson’s earthwork and spirals in general are “a visual relative of the labyrinth, archaic symbol for gradual enlightenment, spiritual evolution, pilgrimage” and also a “manifestation of disorientation and dizziness”. For readers interested in experimental fiction, Theories of Forgetting is a disorienting and enlightening work. Its pages evoke another Smithson artwork, a pencil drawing reproduced on a press release from Smithson’s gallery titled “Language to be Looked at and/or Things to Be Read” (1967). The drawing, A Heap of Language (1966), is in the shape of a hill or pyramid. Theories of Forgetting is both a text to be read and a book to be looked at and handled. You can’t stop paying attention.

Lance Olsen is author of eleven novels, one hypermedia work, four critical studies, four short-story collections, a poetry chapbook, and two anti-textbooks about innovative writing, as well as editor of two collections of essays about innovative contemporary fiction. His short stories, essays, poems, and reviews have appeared in hundreds of journals, magazines, and anthologies, including Conjunctions, Black Warrior Review, Fiction International, Iowa Review, Hotel Amerika, Village Voice, Time Out New York, BOMB, Gulf Coast, McSweeney’s, and Best American Non-Required Reading. Olsen is a Guggenheim and an N.E.A. fellowship recipient, winner of a Pushcart prize, and former governor-appointed Idaho Writer-in-Residence. His novel Tonguing the Zeitgeist was a finalist for the Philip K. Dick Award. Olsen currently teaches experimental narrative theory and practice at the University of Utah and serves as Chair of the Board of Directors at Fiction Collective Two. He is Fiction Editor at Western Humanities Review.

Erica Olsen (no relation) is the author of Recapture & Other Stories, a collection of short fiction about the once and future West.