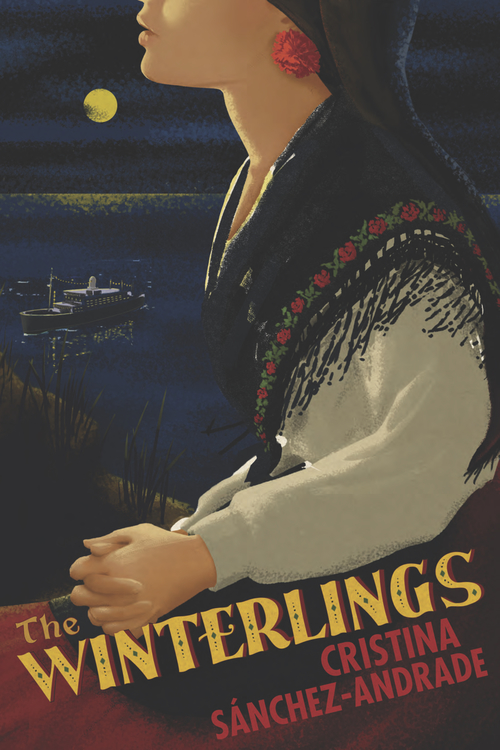 What is a Winterling? Or, in the novel’s original Spanish, an Invierna? The word might suggest, among other things, lambs born in their winter pens. It might also suggest certain early blooming flowers—winter aconite, for example—that thrive under bare forest canopies but will quickly die back into their bulbs once the trees come into leaf. Regardless of the association one might choose, the title is an apt one for this novel of provincial Spain at the cusp of modernity, and for its characters, for whom modernity cannot come fast enough.

The Winterlings are two sisters, Dolores and Saladina, who left Tierra de Chá, a remote village in the interior of Galicia, following the takeover of Franco’s Nationalist forces during the Spanish Civil War. They return in the 1950s, no longer young women, and take up residence again at the old family house. On the surface, they lead their lives as ordinary peasant spinsters. They sew, raise chickens, tend to the orchards. They visit the town bar, attend church festivals. But, as one would expect, there are resentments and desires burning beneath the surface of work and community life:

In the darkness of their bedroom, in their little iron beds, the Winterlings let themselves speak of their secret.
A voice (or is it the wind?) scratches away at the silence.
“Listen, Sala…”
And the other replies:
“What?”
“That day, do you think…”
“Yes…”
“Do you think we did the right thing?”
“We did what we had to do, Dolores.”
And then after a while:
“Listen…”
Saladina lights the oil lamp. She stretches an arm towards the other bed and takes her sister’s hand.
“What, Dolores, tell me…”
Her skin gives off waves of heat, the light, the beating of their hearts, and the touching of flesh soothes the women. Dolores’ answer lurks in the darkness.
“Nothing.”

The novel begins rather boldly, minimalist and lyrical, with elements of profound ambiguity. In the opening chapters, the Winterlings are indistinguishable from each other. The narrative elides their names, as if one could stand for the other. That this is not continued seems a missed opportunity. The sisters are not twins, not identical, and yet, as indicated by the epithet, “the Winterlings,” the village treats them as a unit. They are insiders who have become outsiders, objects of collective shame and therefore collective judgment. Naming the sisters does give them room to act as individual agents, their respective thoughts and actions clearly assigned, but it removes much of the narrative tension around their isolation.

Why are the Winterlings mistrusted? What goes unsaid even between sisters? Their precarious standing in Tierra de Chá goes back to their youth during the war. The sisters’ grandfather, Don Reinaldo, once held an influential position within the village. But as Franco’s forces gained control of Galicia, Don Reinaldo’s increasingly erratic behavior and redistributionist politics put him and the family in jeopardy. Informed upon, he was taken into custody and returned a broken man. The girls fled, eventually making their way to England for the duration of the Second World War.

When the women return, Tierra de Chá is a changed place, but the changes have not quite made their way to the surface. There are the same eccentric characters: Mr. Tenderlove, who steals teeth from the dead to make dentures; the old lady of Bocelo Mountain, a supercentarian. The village priest, Don Manuel, rides horseback every day to administer her the last rites and every day she survives to live another. They all have their own dark past, each with its connection to the two sisters. Occasionally these portraits devolve into preciousness. In her exploration of small town cranks and malcontents, Sánchez-Andrade follows in the line of Flannery O’Connor and Carson McCullers, but without the wry cynicism that animates the best work of those authors.

Colorful as they are, the episodic structure often retards rather than propels the novel. Sánchez-Andrade takes care in linking each episode to the larger plot, but the pressure within the narrative remains slight. Part of that stems from the half measures the author takes in setting the tone. The characters are capable of grotesque acts of deception and violence, including murder, but these neither weigh on, nor are they blissfully absent from, the collective consciousness. The villagers live in a twilight state between the contentment of the innocent and the despair of the guilty. While this is rich ground for fictional exploration, the history never quite gains the weight it should.

Contemporary Spanish-language literature is rich in work tackling the twin subjects of exile and provincial stagnation—from writers such as Renaldo Arenas, Roberto Bolaño, and Horacio Castellanos Moya, to name only a few. While there are few old enough to remember the Spanish Civil War, there are many for whom civil war and statelessness are continuing facts of life. These facts could carry a sharper sting in The Winterlings.

Where the novel is most evocative is in its descriptions of village life. Sánchez-Andrade explores the paradoxes of modernization with wit and sensitivity. Tierra de Chá is stuck between worlds, between the timelessness of peasant culture and the dynamic sweep of life in a technological, bureaucratic state. The Winterlings find themselves torn between the comforting certainties of home and the possibilities the wider world has to offer. They feel both fated and free.

Midway through the novel, Saladina chides Dolores about her beauty, her interest in Hollywood celebrity culture, and her desire to leave town to become a movie star:

“You have to leave? The men whistle at you? Let me tell you something, you dummy, you’re gushing like a thirteen-year-old girl, repeating nonsense you’ve read in Superstars. You can’t ever change your life. No matter how far you travel, or what you seek abroad, your life will continue to be what it is. It’s the life you have now. The life that lives inside of you.”

For readers who grew up in small places, these sentiments are instantly recognizable. While the Spanish Civil War serves as a dramatic backdrop, these everyday feelings of isolation, the desire to play life on a grander stage, and the fear that comes with living what one has always known, form the heart of the novel and are its greatest pleasure.

Samuel Rutter is a writer and translator based in Melbourne, Australia. A contributing editor to the journal Higher Arc, he is currently completing his PhD in Post-millennial Fiction from the Southern Cone of Latin America at the University of Melbourne. This year, he is a visiting researcher at the Instituto de Letras Hispanoamericanas at the Universidad de Buenos Aires.

Matthew Spencer is a writer and visual arts curator living in Seattle.