The Way of the Dog by Sam Savage 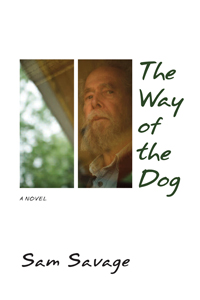 Midway through The Way Of The Dog, narrator Harold Nivenson — would-be artist, once art collector and critic, now curmudgeonly hermit and near-invalid — discovers a koan hung by another’s hand on his refrigerator:

“When a man comes to you with nothing,

what would you say to him?”

And he replied, “Throw it away!”

Sam Savage’s latest novel, his fourth, is the story of Harold’s own working toward nothing. Whether that journey is ascent or descent, loss or gain, is open to interpretation, an overhanging question that gives the novel (as it does life) its mysterious, bittersweet appeal. Harold begins the novel in mourning for his recently deceased dog Roy, his only apparent friend and source of contact with the world beyond a large, crumbling house once grand and crowded but long since the eyesore of the block. Without Roy, and with his ersatz career at an end, he is untethered and almost unwilling to live:

So that was life, one thinks. One is tempted to yawn, but there is not time.

The house is filthy, more or less choked with clutter. Clothes I don’t wear, books I don’t read, gadgets I don’t use.

They will say, “He lived in a pigsty.”

I look around at the dirt and litter: Harold Nivenson’s droppings.

The novel is composed of such short, passing fragments, a formal conceit suggestive of Harold’s preferred method of recording his life on bound packets of index cards and small scraps of paper, an earlier habit he has returned to as an older man. “The entire justification for taking up the index-card habit once again,” he explains, “was finally to make a statement.”

The novel, then, is that statement, or perhaps the struggle toward a statement, because The Way Of The Dog reveals not so much the story of Harold’s life as the spaces in and around that story. The gaps between fragmentary moments and observations, perhaps in the time unrecorded from one index card to the next, are where many of the events and explanations might have occurred while instead we sort through Harold’s left-behind “droppings.” Savage’s novel suggests William Gaddis that way, not in its style so much as its willingness to let apparently major moments occur out of sight — arrivals and falling outs and reconciliations, even fundamental changes to our narrator we know have occurred but can’t quite pin down. It’s as cryptic and richly suggestive as the koans Harold finds in his house, left behind by Moll, an older woman who arrives apparently unasked and unwelcome to tend Harold and his filthy house. As cryptic, too, as the jigsaw puzzles Harold enjoyed in his youth, despite the bullying of siblings and his attempts to resist:

The lure of puzzling was always too great, and eventually, sniffling and tear stained, I would gather up the scattered pieces and resume my work. I would continue working even though I knew with absolute certainty that they would always have succeeded in removing the essential piece. With pigheaded obstinacy, perhaps just to spite them, I would continue to work on something that I knew was impossible to finish. And indeed I always ended up “completing” a puzzle from which a single piece was missing. After a while, constantly working at something impossible to finish, I came to see this as the normal course of events.

His language is a mélange of high and low, of a bitter disposition unable despite itself to ignore an ugly world’s glimmers of beauty and grace. As Harold collects his memories, complaints, and biting observations about past friends and enemies (often one and the same) and current neighbors — particularly a college professor/novelist he sees often outside his house, for whom he reserves particular if unspecified ire — Moll toils in the background, cleansing his filth, discarding his objects, gently moving Harold toward “nothing,” and frustrating him with her own peace. “She goes about in a frumpy house dress,” he observes,

dark red with large white flowers, a flounced hem, and also something yellow that looks like a sari. Because she is more at ease now, or because the weather is warmer, she has begun wearing shorts. She doesn’t seem to care how unbecoming that is.

A fatalistic, resigned darkness creeps in at times, often bursting from less grim observations, as when between notes about the neighborhood Harold veers off to describe in detail the pistol he bought years before and now keeps under his bed. That gun, though dormant, re-emerges along the course of the novel and lingers as a shadow over everything else. Those lingering, shadowy interstices with their potential for violence and chaos give The Way Of The Dog its unexpected cumulative power, because as Harold reminds us, “The fissure between an act and its description, between the facts and the story, is unbridgeable.”

Such a reticent narration is at times obtuse almost to the point of frustration, but that almost is what makes the difference. Harold isn’t particularly charming, or kind, but he’s not exactly unlikable, either, or not to the point where his sharp voice ceases to be a pleasure. His journey toward nothing is philosophical but balanced by the tangible, too, and often even the scatological. We are never far from the everyday aches, pains, and muck of his life, and that keeps us as tethered to a concrete world as it does Harold himself. The Way Of The Dog is the work of a writer with firm control and confidence. Savage seems to know just how far he can push things — the obtuseness, the bitterness, the unexplained and underdeveloped elements of Harold’s account — and hews to that line adroitly, making the inevitable march into decline and decay no less confusing but a bit less lonely, a bit less terrifying, a bit less of a total loss by pointing toward a way to embrace and let go of the nothing at once.

Sam Savage is the author of the best-selling, critically acclaimed novels Firmin: Adventures of a Metropolitan Lowlife, The Cry of the Sloth, and Glass. A native of South Carolina, Savage holds a PhD in philosophy from Yale University. He was also a finalist for the Barnes & Noble Discover Great New Writers Award, the PEN L.L. Winship Award, and the Society of Midland Authors Award. Savage resides in Madison, Wisconsin.