The Unmapped Country: Stories and Fragments by Ann Quin 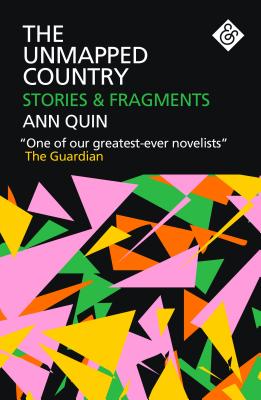 An ocean or a desert fills the horizon. Its undulations break across some tiny inhabited quarter. People actually come here for their own enjoyment. They will get little of any such thing, in this so called resort, with its weed choked lots and poorly furnished rooms. They argue instead. They fuck on dingy beds. They plot murder, of the self and of the other. Apocalyptic visions manifest. God and his chorus of angels float above roadside holiday motels. And then, foremost, there are the voices, unattributed, disembodied, flitting about damp corridors, dissolving along windswept promenades.

This is the fictional habitus of Ann Quin, author of four novels and The Unmapped Country: Stories and Fragments, a collection brought out this year by And Other Stories. As editor Jennifer Hodgson writes in her introduction, “Quin was a rare breed in British writing: radically experimental, working class and a woman.” Her tough, grainy prose still feels apt today, apt despite the five decades following her death. Relative obscurity has only heightened that necessary quality. At a time when women are driving forward difficult conversations about sex and power and violence, we have Quin already there, writing at the center of those concerns.

The first impression is of solidity. Quin’s style recalls quayside blocks, ruined bunkers, conglomeritic stuff. Paragraphs can stretch for pages at a time. Even short passages can feel dense. But inside this firm edifice, jumbling chaos is found. Speech and thought and precept commingle. Lines are truncated, often fragmentary, clauses loosely interlinked. In “A Double Room”, a married man and younger woman share a gloomy tryst at a seaside resort. The lodgings are poor, Quin playing to type, with loose bits of sensory detail rattling around them, disturbing the peace:

My hair into place. Makeup renewed. Eyes averted. His. In the corridor past numerous yellow doors. An old may lay on a single bed. Looked up at a lamp shade. Sorry I thought it was the bathroom. Deaf. Must be deaf. Or maybe dead.

Detail follows detail, relentlessly. Tenses mix, the immediate rubbing shoulders with the introspective. Perspectives shift. They interpose, like a mismatched couple, like the mismatched couple of the story, one talking over the other, without end.

Quin lived very much against her disadvantages rather than under them. She was born to a single mother, suffered from debilitating bouts of mental illness. And yet she traveled widely, lived in places as far afield as New Mexico. And much like her biography, these vivid dichotomies animate the fiction, dichotomies between intimacy and isolation, between constraint and liberation, between poverty and richness of spirit.

The Unmapped Country is an archival achievement as well as a literary one. Quin never had a collection of short work published in her lifetime, and Hodgson was left with relevant manuscripts spread literally across the world. And yet the collection feels complete. Even the fragmentary works can be read straight, without the cumbersome apparatus of scholarship or biography.

Two brief manifestos form the exception to this rule. They were composed very early on in Quin’s career, circa 1962, for the New Zealand pop artist Billy Apple. Their hepcat patter sounds incredibly dated to contemporary ears, as does the racial fetishism, attendant to so much white bohemian culture of the time. “Made it with a gorgeous nymphomaniac negress,” Quin as Apple writes, “man she was wild, crazy, in full view of the whole of New York, with the light on, man across the way cleaning his teeth. OK Henry Miller.” Even a year or two later, with her debut novel Berg, Quin would examine themes of sexual transgression with much more depth and individual voice, minus the stereotypes. But her unmistakable style is already there.

The centerpiece of the collection, in a literal and spiritual sense, is “The Unmapped Country,” a highly autobiographical account of a woman confined at a psychiatric facility. Quin began writing it shortly before her death. It contains much of what makes the author so compelling.

The protagonist, Sandra, is an outsider among outsiders. She mordantly observes her fellow inmates and trades barbs with hospital staff. Subject to mystical experiences, paranoid delusions, she struggles to document her inner life in a journal. This forms the central tension of the story. Sandra knows that she is unwell, but her illnesses are also a source of great meaning. In a sense, they are all she has left.

Quite abruptly, the narrative shifts to the past, to a time before Sandra was confined. Here the mental disturbances become even more vivid, threatening. Left home alone by her lover Cleve, she is visited by catastrophic visions:

The glow from the garden ascends. The ladder of fire reaches the ceiling. I am walking on air from room to room. The walls breathe and have luminous edges. Those from the other side have melted away. But Death in white sits on the swing, head bent, hooded.

Sandra never finds her way through this maze of apocalyptic imagery. The story ends abruptly but aptly. She leaves home and, believing Russian spies have tailed her, seeks refuge with the friends of Clive. “You better come in and tell us about it,” they say, “ — want to stay the night here?”

One can easily imagine what happens next: a party perhaps, some drugs, alcohol at least, sex with one or more of the friends, regret afterwards. Sandra’s retelling might have come later, in pieces, beset by interruptions and doubt. Or it might have never come at all, infinitely delayed, subject to that one final interruption, a reflection of what would happen in real life.

Shortly after writing “The Unmapped Country,” Quin swam from Brighton’s Palace Pier and never returned. The stories themselves often prefigure that fate: a drowned woman, with the other characters having to sift through broken memories, trying to make sense of it all. But Quin’s story is not purely mimesis. We have this collection, a collection that survives, not washed away by the tide, to guide us through a challenging and productive literary life.

Matthew Spencer lives and writes in the Pacific Northwest region of the United States.