The Things We Do That Make No Sense by Adam Schuitema 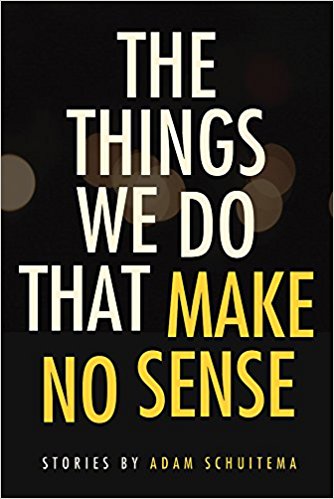 The Things We Do That Make No Sense, Adam Schuitema’s second story collection, begins with a passage from one of Andre Dubus’ most famous stories, “A Father’s Story”: “For ritual allows those who cannot will themselves out of the secular to perform the spiritual, as dancing allows the tongue-tied man a ceremony of love.” This sentiment factors into several of Schuitema’s Michigan-based stories, many of which focus on middle- and lower-class individuals who perform ritual-like acts in an effort to find solace in tumultuous family dramas. While not entirely spiritual in nature, the tone throughout the collection is always reflective, and in the best of the fifteen stories comprising The Things We Do That Make No Sense, Schuitema’s realism offers something transcendent, presenting the ordinary as something more than it may initially seem.

A highlight of the collection is one of the book’s shortest stories, “Pink Blood.” On the morning her firstborn son, Jordan, is to enter the state penitentiary for brutally assaulting another man, Linda Selig searches amongst family possessions to find a plastic bag containing her son’s baby teeth, tucked away for almost twenty years. As she empties the bag into the palm of her hand, Linda feels guilt and regret, but she and her husband John tend to blame chance rather than take responsibility:

She taught him how to ride a bike when he was five—there, across the street, at the little cemetery. Years later, John called it bad luck. They’d taught the girls in the church parking lot, and they’d turned out fine.

Nowhere in the story do Linda and John acknowledge a prominent role in Jordan’s upbringing, and Linda comes to some kind of understanding of this failure in an unusual but moving final act:

She opens her hand again. The roots of some teeth are tinged pink with old blood. She pinches one between her right thumb and forefinger and slips it into her mouth like a pill. It rests on her tongue, and in the seconds before swallowing she searches for its taste.

Swallowing the teeth is a kind of admission of her son’s sins, the burden of remorse still upon Linda.

A similar communional act occurs at the end of “All Your Vanished Men,” a story recounting a VFW chili cook-off and a man in search of a reason for his father’s disappearance. The single, thirtysomething narrator trudges past booths prior to the cook-off, noting the oddball participants of an event he and his father made a habit of attending. The Hula Girls offer chili with pineapples while a group of nuns take pride in their buffalo meat entry, but, unlike past years, the narrator is alone. In the last year, his father disappeared, leaving behind two grown children and an ex-wife he’d grown close to since their divorce. The narrator isn’t interested in his father’s whereabouts; he found him through some basic internet searches. Rather, the narrator states, “I want to know why.” Disappearance—at least for the men—runs in the family, and facing an uncertain and lonely future, the narrator downs pitchers of beer and thinks of how his life has grown stagnant and ordinary:

I have to be careful here. A few more drinks and I could easily surrender to the flood of self-pity that’s always straining the hinges of that gate in my brain. Weight gain. Hair loss. Three-year sexless streak and a piece-of-shit Corolla.

Which is why a part of me gets it—the allure of vaporizing and rematerializing, leaving one life and starting fresh and unknown in another.

The narrator resolves to follow in his father’s footsteps, and by the end of the story, he acknowledges that within a few days, he, too, will vanish. The narrator stops at the nun’s booth, where one of the nuns beckons him to start with tortilla chips, which he at first refuses:

She drops her eyes, shakes her head slightly, and picks up a single chip. “Cleanse the palate,” she says. She looks up again and reaches over the table, holding the chip out to me—not toward my hands, but higher, toward my mouth. And without thinking I’m opening wide, extending my tongue a bit, where she gently lays the chip. I close my mouth but never take a bite, letting it slowly dissolve. The band begins playing “This Land Is Your Land.”

The palate cleansed—and perhaps the mind cleared as well—the narrator takes on the physical representation of the spiritual father just as his acceptance of his natural father’s disappearance seems fully realized.

The title of Schuitema’s collection comes from a rumination by the narrator at the end of “All Your Vanished Men,” but the sentiment holds true throughout as characters often commit deeds without full understanding of purpose. A need to find clarity in familial relationships serves as a driving factor, even in stories not explicitly about family like “Virgin Lands.” The reminders of family—and the lack of accountability—are ever present. Attempting to escape memories of a broken relationship that ended with a son given up for adoption, 19-year-old Cory ends up at a Canadian strip club, befriending Nika, a stripper. She offers him a free dance, and as she disrobes, his attention to her body morphs into a reminder of the past:
bq. He thought of how, in junior high, he’d popped the head off his sister’s Barbie and replaced it with the head of Cruella de Vil, and he instantly knew the connection to Nika was horrible and mean. He began to slip outside of himself, staring at his beer, but then forced himself to really feel the guilt. To feel all of it. The true everything.

Even attempting to escape his troubles, Cory finds that he’s more burdened by them than he realizes, and, like Linda Selig, he feels the need not to shake off these sufferings but to deal with them as honestly and directly as possible. In so many of Schuitema’s stories, there’s a real need for characters to confront their dilemmas—guilt, sadness, confusion—rather than run from them.

Cory must face his betrayal of the one role he wasn’t prepared to accept—fatherhood. That obligation to family—to others—unites so many of the stories in The Things We Do That Make No Sense, and through triumphs and failures, Schuitema’s characters are, like the father in “A Father’s Story,” flawed yet undeniably intriguing, their acts of ritual and attempts at salvation enlightening.

Adam Schuitema is the author of the novel Haymaker (Northern Illinois UP/Switchgrass Books, 2015) and the short story collection Freshwater Boys. He is associate professor of English at Kendall College of Art and Design and lives in Grand Rapids, Michigan, with his wife and daughter.