The Swimmers by Joaquín Pérez Azaústre 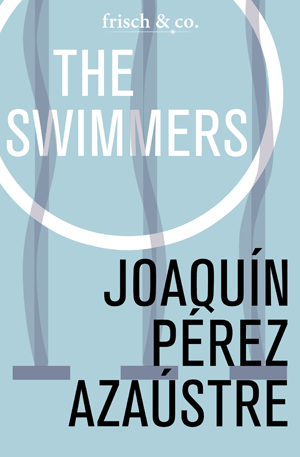 In Joaquín Pérez Azaústre’s The Swimmers, a separation from his wife and stalling career send protagonist Jonás Ager into a kind of tense disconnect from his world and so he takes solace in swimming; this is not a Zen process or other spiritual journey but a connection between body and mind that he cannot find out of the water. Here he can “reduce himself to a pulse.”

Jonás is usually joined by a friend, Sergio, although their lives follow different trajectories, as Sergio is settled with a family and successful job, but when together…

They discussed where they saw themselves in the future, discovering that the same attitudes and behaviors could occasion the same auspicious results in apparently unrelated occupations: photographer and executive at a major insurance company.

This is not to say that Jonás is striving, or envious of his friend’s success, nor is the novel about the development of their relationship, even though that relationship consequently does. If anything, these sentences work to express Jonás’s further detachment from the sort of life the two men previously dreamed about. Interestingly, his detachment does not remain a figurative matter, but is dealt with again and again by Azaústre. It infiltrates the novel’s construction and prose rhythms, creating a kind of recursion that mirrors the movement of swimming as phrases accumulate and gather a steady pace, sometimes turning laps over the pages.

Since Jonás’s career has stalled, the reasons for which are only hinted at, an opportunity arises for a way back into photography. Jonás summons a name for his work – Reality Without Actors – which the inspirations and implications of become hazy: How much do we draw inspiration from life in art and how much does art influence our view on life? Jonás’s thoughts tumble and accumulate and he decides to:

…try to capture the settings separated from the cast: when the performance is done the stage so often continues on, defiantly, still bearing the traces of its protagonists.

It is not just a question of photographic art, but the art of the novel, and indeed the boundaries of artifice. Azaústre implies that the novel could be read as a meditation on photography; Barthes’s Camera Lucida is mentioned as a book on one of his mother’s bookshelves, and indeed Barthes is an influence. The point of view is strictly Jonás’s, and the fictional world is in control of Jonás and his detachment. But his art gives him back some level of control as the world starts to depopulate, like the premise (or hypothesis?) of his exhibition.

Things come to a head when his mother disappears (it is also worth mentioning that Camera Lucida was also a personal eulogy to Barthes’s mother), which is where the questions of metafiction interject. In Zadie Smith’s essay “Two Directions for the Novel” she says of Tom McCarthy’s Remainder, a book immediately drawing parallels, that,

…it forces us to recognise the space as a non-neutral thing – unlike realism which often ignores the specificities of space. Realism’s obsession is convincing us that time has passed. It fills space with time.

How then does Azaústre fill his pool of the novel; who are the swimmers and what are they swimming in?

Searching for his mother, Jonás investigates her apartment, where the usual family relics are not, in this case, given any emotional symbolism but instead revolve around water. Barthes’s influence is obvious from his work in mythologies. As Jonás comes across the television stand, “out of habit,” he opens the door and finds a video inside that is “the first sign of life he has encountered… there is another life on this tape, the possibility of another existence” (psychoanalysts might be inclined to read into this more).

So what is the remainder in this case? Other reviews have likened Azaústre to Murikami, and there is something of Camus, but as mentioned earlier, Tom McCarthy’s brilliant but under-appreciated Remainder draws a lot comparisons. The geography of The Swimmers is not as important as it is in Remainder, but they both question the environment of the novel and the world, and also ask when does our act of everyday living stop, and if so how do we carry out that act? It is best said here by Jonas, “it’s not a ghost town – but rather a theatre where the actors have disappeared or vanished into thin air.”

This idea is perhaps best elucidated by Marius the doorman. We do not know anything about him, at least for the majority of the novel apart from his ceaseless reading of novels that are “typically about voyages or sometimes mysteries or detective stories, although he much prefers science fiction.” And Jonás and Marius’s interactions are always the same; Marius never reciprocates Jonás’s questions because:

…his only concern is that such interruptions last more or less thirty seconds, or a minute if Jonás stops to check his mail; that’s the time it typically takes Jonás to cross the foyer and leave the doorman behind, once again absorbed in an alternate universe.

In this way, the minutiae of Marius’s life is deconstructed and made subjective like every other actor, but we as the reader become aware of him, and aware of the Mariuses in our lives, and our own subjective existence to others.

Jonás seems to find power in the collective; of water and seemingly, people. His dad tells him he “was on the wrong side” in the protests, and for whatever reason he lost his job at the newspaper. It is that detachment though; how much of it is willed by Jonas, or even can it be willed? Is it only through swimming that Jonás can reduce himself to the pure self to which he has either descended or willed? Indeed, to the pulse he desires at the start of the novel. What are the waters that we as swimmers swim with and against? This is the beauty of how Jonás uses swimming, not as a physical act, but an internal, psychological act.

Toward the end, however, The Swimmers loses some focus. Because of the way in which Azaústre chooses to “fill” his novelistic space, and drive his point home, the style does become slightly laboured in the final parts; whilst it is wonderfully weighted and pleasing, it can also slow the pace in places where it doesn’t need to. And even once borders on the absurd as Jonás, in a tense situation, finds time to disseminate, with detail, the notes of the whisky he is drinking. Along with this, the metaphors about water and an over-reliance on the colour blue, become strained and tired toward the close; “sky blue” for instance pops up noticeably often in the final pages.

So we are left with The Swimmers as a title. Deceptively mainstream looking, but it tells everything; it is not possessive, it is not the swimmer attaining something, like a novel of realism would fulfil. Zadie Smith said of Remainder’s antithesis, the lyrically realist, contemporary novels (she was specifically talking about Joseph O’Neill’s Netherland, but I generalise) which are only ‘‘partially aware of the ideas that underpin them and always want to comfort us, to assure us of our beautiful plenitude.’‘ The Swimmers, like Remainder, is fully aware of its own ideas.

Ironically, The Swimmers is listed under Amazon’s “Thrillers and Mysteries” section; those seeking that type of novel in the strictest sense will be disappointed, but so will those seeking the lyrical realist novel, despite the prose being very pleasing and “arty.” Instead, Azaústre chooses to fulfil us, not with emotion, but with essential metafictional questions of the novel, and essential questions of life. This is not a novel that will make you feel good about yourself along those lines of “beautiful plenitude,” nor will it solve any superficial mystery, but it is undoubtedly a novel of essential fulfilment.

Joaquín Pérez Azaústre has published several poetry collections, a collection of short stories, and several novels, including La suite Manolete, for which he was awarded IX Premio Fundación Unicaja Fernando Quiñones in 2007. A journalist and columnist, he has also been awarded the Premio Adonáis de Poesía, the Premio Loewe and the Premio Loewe a la Creación Joven, among others.

Lucas Lyndes is an editor and translator. He is also one of the founders of the digital publisher Ox & Pigeon, which focuses on translations of world literature into English.

Liam Bishop is studying for an Msc in Community and Critical Psychology, whilst reviewing and writing about books at Curb Your Subisms . His work has also appeared at Pop Matters and he can be found on Twitter at @bishopofbishop.