The Sum of His Syndromes by K. B. Dixon 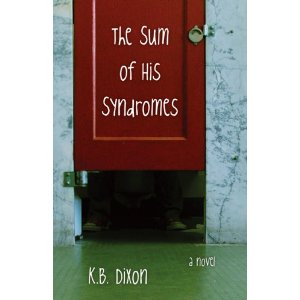 In the unusual novel, The Sum of His Syndromes, K.B. Dixon’s central character David installs himself (presumably with pen and paper) in his company’s sixth-floor men’s room and then treats the reader to his scatterings: philosophic aphorisms, overheard conversations, observations about co-workers, comments about the frustrations of his self-published writer friend Peter, and repeated mentions of his fear (or knowledge) that his girlfriend Kate will leave him. The threat of Kate’s leaving does indeed propel this strange text forward, but there is something bigger in the backbone of the novel, and in the end, it is where the reader finds the story David seems to not even realize he’s telling.

Hundreds of “characters” are described throughout this tiny book—people who are bald, have thieving children, wear too much perfume, brush their teeth too often, collect dolls, care too much about their jobs, care too little about their jobs—but only one character is more often than not mentioned through dialogue, an unnerving 2nd person dialogue. David’s psychiatrist, known also as Dr. Costa, or Dr. C, is also “you.” Of course, the reader, naturally, is “you” as well. So the reader is the psychiatrist, and is invited to analyze David, to accept the challenge of understanding his problems, to help him get better, or to give up, as David dares Dr. C to do. The reader is granted a snide understanding that Dr. C, well-meaning though he may be, (MAY be), is also earning a buck. The reader of course, doesn’t have that same pleasure. David essentially apologizes:

Me and my delicateness. It sure can get tiring. Oh woe is me… I’m in the deep dark dumps. How long can you listen to that? You would have to pay me too – I mean, how many times can you ask a person if they’re all right before you stop really caring about the answer?

And yet, the answer is clearly there, just out of reach, and caring about it is essential. The reader isn’t paid to be David’s shrink, but so too, the reader won’t be threatened with a law suit or guilty conscience if things ultimately don’t work out well for David. Moreover, the reader has no medical degree and prescription pad at hand. Dr. Costa, however, has both. Chemicals to the rescue! But David resists.

Yes, Dr. C, I understand that these days it would probably be considered malpractice not to offer me a prescription. What about a placebo? I might agree to that.

Even as his situation gets subtly more complicated, he resists. Kate’s friend Lisa doesn’t approve of David. His job is shifting with changes in management. Peter is writing David’s fictionalized biography, trespassing on David’s real (or exaggerated) problems with his intrusive landlady. It’s not that David wants to live a private life – he is opening his men’s room observations to the world – but it is easy to see Peter’s writing as overstepping common bounds of friendship. As always, though, David shrugs off his concerns.

Life is cruel, unfair, and arbitrary. Focusing on the fact does not change it. Neither does ignoring it.

However, even as he pretends not to care, David’s real frustration is evident. People are too superficial. And they wish they could be different versions of the people they are.

At some point the question seems to have changed. It’s no longer ‘who am I?’ but ‘what should I wear?’

Does Charlene Iverson know what she looks like in that outfit? Is it really what she intended?

Gloria Doyle believes if she exercises more, listens to Mozart, and reads challenging books, she will eventually morph from who she is into who she wants to be.

David wants to morph also, or to care about things more. He worries that “what appears to be indifference, may in fact be fear.” There is a resemblance to Salinger’s Holden Caulfield here, still in the throes of his angsty teen-age boy chaos. Holden has the good sense to tell the reader his story after he’s more or less through his trauma. David doesn’t grant the reader that luxury. As a result, any observation he makes may lead to the answer, and David doesn’t hold back. Blueberry pancakes for breakfast. A single name. “Delaney!” A single letter, offset by asterisks. “D!” Even the well-paid Dr. Costa would surely have a tough time making use of all of it. In the end, David has no idea where his relationship with Kate will go, what will become of his writerly aspirations, or what will become of his job. He does know, and remains resolute, that he will stay true to himself, whatever that means, and resist modern medicine’s chemical alterations. And in that one clear decision, the reader, the shrink, “you” are granted the tiniest glimmer of eternal hope. Better than you get from Holden Caulfield, in fact.

K. B. Dixon’s work has appeared in numerous magazines, newspapers, and journals. The recipient of an OAC Individual Artist Fellowship Award, he is the author of four novels: The Sum of His Syndromes, Andrew (A to Z), A Painter’s Life, and The Ingram Interview as well as the short story collection, My Desk and I.