The Story of My Teeth by Valeria Luiselli 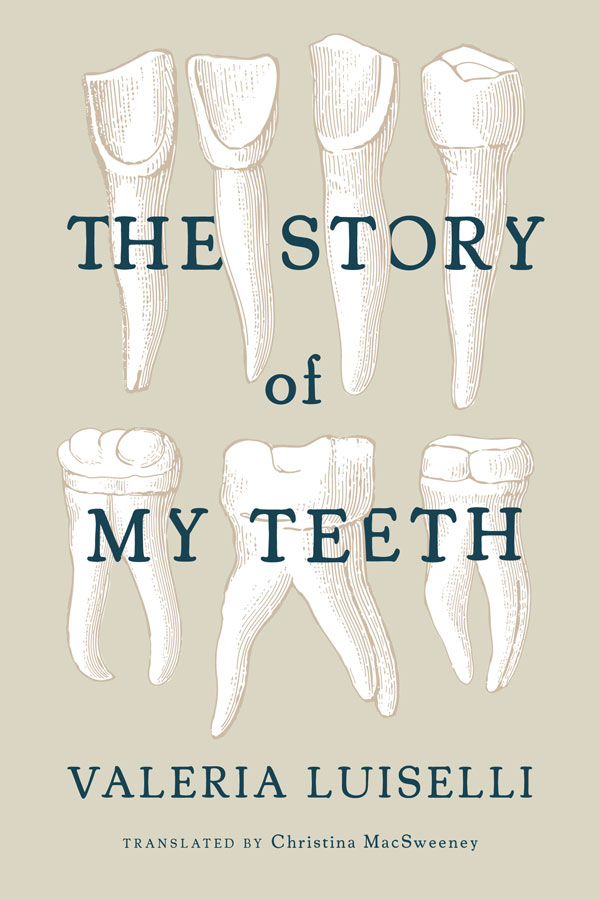 The opening of Valeria Luiselli’s The Story of My Teeth is intriguing: “I’m the best auctioneer in the world, but no one knows it because I’m a discreet sort of man.” Most of the novel is narrated by Gustavo Sánchez Sánchez, better known as Highway. Later portions are narrated by Jacobo de Voragine, Highway’s “dental autobiographer.” Highway explains, “This is the story of my teeth, and my treatise on collectibles and the variable value of objects.” Highway’s teeth become story-worthy when he buys Marilyn Monroe’s teeth at auction, using them to replace his own. The protagonist is at once off-putting and sympathetic, the story an accumulation of images and tall tales and familiar names.

Luiselli’s book invites consideration of the nature of meaning and of value, as the value a story can impart to an object remains a central concern. The novel is divided into Books I-VII (including The Story, The Hyperbolics, The Parabolics), and an Afterword. Highway’s (auto)biographer observes, “He was a man who truly loved material objects. And his love for them went beyond their real, material worth; for him, their value lay in that thing that, in some way, they silently enclosed.” For his part, Highway claims that, citing Quintilian, “by means of my hyperbolics, I could restore an object’s value through ‘an elegant surpassing of the truth.’” Anything may become valuable, properly framed. At auction, value is simply an agreement between the seller and the buyer. The most obvious conclusion here relates to art and consumerism, to inflated values and overconsumption, but the marginal setting of the story, highlighted by some of the images included in the book, implies that the reverse is also true: that which is discarded may be devalued on the basis of an insufficient story, an inability to elegantly surpass the “truth” of poverty or marginalization, rather than on an intrinsic lack of importance.

Highway meets the potentially dispiriting circumstances of his life with a meticulous attention to detail and an outsized sense of drama. He begins collecting in childhood, when his schoolwork is interrupted by his father’s habit of paring his fingernails with his teeth, spitting the bits of nail across the room to land on the boy’s notebook:

I’d contemplate the piece of nail lying there, dead and dirty, a few millimeters from the point of my pencil. Then I’d draw a circle around it and go on doing my writing exercises, carefully avoiding the circle. [. . .] During the course of my childhood, the nail collection got to be so large that I filled several envelopes. End of memory.

The novel is built of such small, grotesque scenes, calm yet revolting. The closure — “end of memory” — is a repeated gesture, used to conclude a digression in a way that keeps the reader at arm’s length, inserting some distance just as the story risks becoming maudlin or the exaggeration too extended.

Writers appear and reappear either with different names (Highway’s uncles Miguel Sánchez Foucault and Roberto Sánchez Walser, his cousin Juan Pablo Sánchez Sartre) or new professions. Jorge Ibargüengoitia is the owner of a local junkyard. Margo Glantz is a retired seamstress. Valeria Luiselli appears as a mediocre high school student. English-language readers will likely recognize some but perhaps not all of these partial namesakes. Other writers (Petrarch, Montaigne) are invoked as the former owners of Sánchez’s own teeth, auctioned off at a church fundraiser. Highway’s flights of fancy are grounded in a Mexican reality. His son, for instance, is born a few minutes after the Mexico City earthquake of 1985. A shrewd salesman, his threat to sell abroad any items remaining at the end of the auction begins to “capture the Cardenist, socialist, national-reconstructive ears of my audience.” Yet this implausible scenario of nationalist pensioners buying yellowed teeth under false pretenses is only a cover for a plot more implausible still. Just as Highway weaves overlapping tales in accumulating layers, he, too, is a participant in a layered story told by others.

Employing a clear, deadpan tone, the style of the novel is disarmingly straightforward, making Highway’s more outrageous claims almost plausible. The language seldom draws attention to itself, yet occasionally bursts into pyrotechnics as when, to calm himself before the big auction, Highway tells himself the story of Little Red Riding Hood in reverse: “Ttleli Red Dingri Hood was walking through the restfo, la-la-tra, la-la-tra, when suddenly, a big ryhai wolf appeared.”

Any translation is a different book than the book it translates. The Story of My Teeth includes a Book VII, The Chronologic, compiled by translator Christina MacSweeney (who also translated Luiselli’s two previous books). This section is a graphic timeline with explanations and includes both events mentioned in the narrative and those that might offer historical context. Much more than a temporal glossary, the section expands or builds upon the narrative.

Luiselli acknowledges her translator in the Afterword in a way that suggests a highly collaborative process: “the Spanish book is also different from the English one — as has been the case with my previous books, which I revise and rewrite so thoroughly in English that I prefer to conceive of them as versions rather than translations.” The distinction between version and translation can be a fine hair to split; what is clear here is a sense of freedom to revise or amend. Echoing ongoing debates among translators and theorists about domesticating vs. foreignizing translations, Luiselli proposes “a new way of engaging with translation; one that neither relies on bringing the writer closer to the reader — by simplifying and glossing the foreign text — nor on bringing the reader closer to the writer, by rendering the text into a kind of ‘foreign English.’” Instead, Luiselli concludes, The Story of My Teeth is an ongoing collaboration in which “every new layer modifies the entire content completely.” The same might be said of the spiraling structure of the novel as a whole.

The Afterword is helpful, but don’t read it first. Knowing something about the process through which the book was written is illuminating, but much of the pleasure in reading this book lies in putting together the puzzle pieces, following the twists and tangents. At first reading, the novel may seem slight, not quite the sum of its parts. Yet the quirky surface texture can be deceptive. In the retellings of his curious experience, Highway emerges as an unexpectedly persuasive character, one who lingers in the reader’s imagination.

Valeria Luiselli was born Mexico City in 1983 and grew up in South Africa. A novelist (Faces in the Crowd) and essayist (Sidewalks), her work has been translated into many languages and has appeared in publications including The New York Times, The New Yorker, Granta, and McSweeney’s. In 2014, Faces in the Crowd was the recipient of the Los Angeles Times Art Seidenbaum Award for First Fiction and the National Book Foundation’s 5 Under 35 award.

Amalia Gladhart has published translations of two novels by Alicia Yánez Cossío, The Potbellied Virgin and Beyond the Islands, and of Trafalgar, by Angélica Gorodischer. Recent poems and short fiction appear in Eleven Eleven, Literal Latté, Necessary Fiction, and Cloudbank. She blogs at amaliagladhart.com.