The Spoils by Casey Pycior 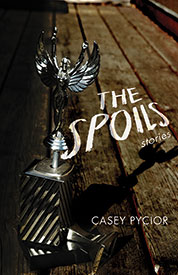 Even those readers who have never been to the Midwestern United States, never seen the plains of Kansas nor the peaks of the Ozark Mountains in Missouri, never dipped a fingertip in the ice-cold lakes of Illinois and Wisconsin, the wind cutting like the blade of a newly sharpened knife, will, after reading Casey Pycior’s debut collection, feel a kinship with the Midwest and particularly with these characters, choked by the very landscape they love. Pycior grew up in Kansas City, where most of the stories in The Spoils take place. Though his characters are aware of the open road and where it leads (somewhere else indefinitely), something makes many of them stay put, steer the course, while others flee.

In “Chasing the Leak,” one man stays to be a parent to his drug-addicted girlfriend’s son, even though his name is not on the child’s birth certificate. In “Pinchbeck,” another man stays to chase his dream of being an actor, for he has gotten the part of Wild Bill Hickok in a shootout reenactment. A boxing referee stays in fight mode to teach a cocky fighter a lesson in “Absolution,” and in “As Much as One Deserves,” a tow truck driver stays in his line of work after a horrifying crash makes him question everything. Regardless of their circumstances, these men are landlocked; their hearts swell from decisions they made or didn’t make due to paralyzing fear. Themes of stoicism and artifice, of pretending to be content during disasters small and large, unify the collection and invite readers to contemplate the lines we draw in everyday life—between love and toxic control, between an individual’s agency and self-sacrifice.

Though most of Pycior’s protagonists are men, his ability to empathize, to create authentic characters across timelines and tax brackets, makes his stories memorable. Pycior acquaints readers with shame—a hidden, contagious, and harmful emotion—in The Spoils because of how it connects to pharmaceutical drug addiction and working class poverty. In “Disaster Carpenter,” a runaway father escapes child support payments by rebuilding areas devastated by “Hurricane Whoever” and other natural disasters. After losing his finger in a work-related accident, Ray is brought to the hospital, where medical staff refuse to attach it without proof of insurance. At the pharmacy, he recognizes Jolene, a woman with “deep lines around her mouth and at the corners of her eyes that come from forced smiles during unkind times.” Remembering him from the bar, she offers to care for his injury, revealing an addiction to prescription painkillers and an even deeper secret. This story probes the dangerous ways people make amends for past transgressions.

Similarly, “Home Shopping” follows Pycior’s only female protagonist, Darlene, as she experiences shame while pretending to shop for homes to purchase with her boyfriend Eddie. Though they have conned realtors and stolen pills from many of the homes they have looked at, Darlene still “hopes all she’ll find is Advil, cold medicine, and birth control pills.” Upon finding forgotten bottles of narcotics, deep in the medicine cabinet, Darlene “begins to cry softly…in a stranger’s bathroom with more pills in her purse than she’s ever taken.” In this story, Pycior uses shame as a vehicle to capture an addict’s fleeting yet poignant moment of clarity.

Shame can also be found in the crevices of Pycior’s relationship stories, those that deal with divorce, loss, and change. In “The Current,” middle schooler Josh embarks on a canoeing trip with his father to dissolve tension following his parents’ separation. Instead of enjoying a fun day on the water, Josh finds himself recoiling from his father’s bitterness and shame, looking upon beer cans that “ended up crumpled, floating at his father’s feet.” In “Preservation,” Pycior juxtaposes historical facts from a sunken steamboat museum against a father’s desire to preserve his relationship with his son, Jordy, after his wife’s sudden death. Just as “the [steamboat’s] artifacts were in danger of deteriorating” before being “cleaned, preserved, and displayed in the museum,” the man struggles to field Jordy’s questions and conceal a less-than-perfect marriage. Both stories assess the value of keeping up appearances.

Not all of Pycior’s characters feel trapped. Some of them exhibit agency in hilarious or human ways. In “Luck,” a novice prison guard is sent off to obtain a prisoner’s last meal before execution. Instead of picking up “a basket of gizzards from up the road,” Collins decides to honor the man’s request to the best of his ability. Finally, the title story, “The Spoils,” features a Washington Generals basketball player who plays hard against the famous Harlem Globetrotters and is surprised by the results. While many of the conflicts contained in this collection are heavy, the book is light and highly readable thanks to Pycior’s ability to convey lived in stories with Heartland humanity.

Casey Pycior was born and raised in Kansas City. He earned his MFA in fiction writing at Wichita State University and his PhD in creative writing at the University of Nebraska–Lincoln. He was awarded the Charles Johnson Fiction Prize at Crab Orchard Review, and his stories have also appeared in Beloit Fiction Journal, Midwestern Gothic, Harpur Palate, BULL, Wigleaf, and Yalobusha Review, among many others. He lives in Lincoln, Nebraska, with his wife and son.