The Secret Games of Words by Karen Stefano 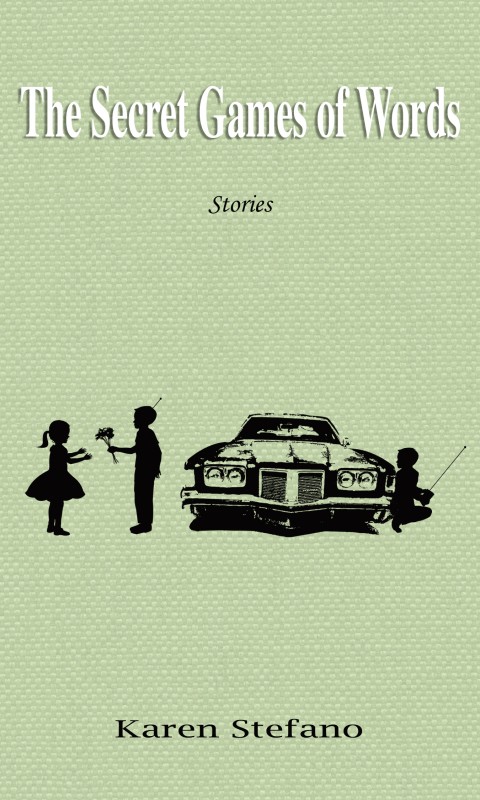 The Secret Games of Words, Karen Stefano’s debut collection of short fiction — and two pieces that at least look like poetry — is an inventory of failures, missteps, disastrous oversights and a roadmap to insanity. But tragedy is counterbalanced by insight, lies by stark-worded honesty.

Timelines and causalities play such large roles in these stories, as if the narrators need to tell you how exactly things went wrong, where paths diverged, how one got from sane to crazy. So often in these stories, understanding how it all came undone comes only — and tragically — as hindsight.

The mostly female narrators in these gut-wrenching, compelling stories are either looking back at difficult childhoods or staring helplessly at futures promising only dementia, cancer, a hospital bed and an agonizing death. In the middle stand the grown-up children — the “haggard” frenzied minds of Stefano’s narrators — coming to the realization that life’s trials are trying to teach them something, trying to toughen them up. And despite their weaknesses these narrators are tough. They’re self-aware, honest, humble and articulate. But they’re also livid and losing control of life; and, it must be said, they’re not the greatest at taking tests. This, however, doesn’t stop them from seeing life as a test, game show or contest, one they seem programmed to fail.

The two boys in “Different but the Same” invent a game show called “The Price is Life” with lizards as contestants. If the lizards fail to answer questions on current-events trivia correctly, they are decapitated with a homemade guillotine; and “[s]ince lizards can’t talk, odds were stacked against them, their fate controlled by higher beings . . . . But those lizards played along grateful probably for the illusion of a real chance.” The illusion that one can win the game (show) of life is shattered again and again in these stories — a sobering thought, frightening even.

Stefano uses US-American TV to pepper the backdrop of almost all of these narratives. Growing up in the US, I watched a lot of TV (my family had TV trays). When I have to explain American culture to Europeans — the ties that bind us — I always say, well, there’s nothing really. We’re all so different. We have such varied histories. But then there’s TV. We have this one thing in common. It’s like Big Brother pumping the same words, same songs, same families non-stop into our living rooms.

Nowhere in this collection is television more present, less subtle than in the hospital room in “Five,” a skillfully layered discourse shared by the narrator, her mother, Science Dork (one of the Jeopardy! contestants) and of course Alex Trebek. Jeopardy! is on in the background as the narrator mulls over her troubled past with her dying mother:

Now I sit staring at the woman who is my mother and wonder how long it will be. When I think of her dying, both my parents gone, it seems important to remember my childhood, the only pure form of our time together. I think that if I can remember, I might understand how I got here, maybe even know what to do next.

How I got here/what to do next: a sort of cadence in these stories. The intertwining of this reflection with the answers being questioned on the TV game show is seamless. The narrator of “Five” has been told she thinks she’s smarter than she really is, so she watches Jeopardy! for a “twenty-three minute dose of humbling.” When her therapist confronts her with the question “Do you want to be right, or do you want to be in love?” she replies “I want to be right.” Getting the answers right means everything. This character is, like many other characters in The Secret Games of Words, occupied with solving life’s questions correctly, but maybe the best parallel is the lizard contestants in “Different but the Same” who really have no chance at being right.

Finally, this collection is a lament — not only for all its dying mothers but also for the narrators’ missed opportunities to learn from them. The narrator of “The Rule Against Perpetuities” has this to say about her Aunt Gracie-slash-grandmother: “Aching to be smarter, better, in control, I had shaken her influence, refused her gifts, said that what she had to bequeath me was not good enough.”

Of course it’s not this simple. There are mothers in this collection who are not particularly good at life’s tests either. The mother in “In Defense of Memory Loss” bequeaths a “strangling fear of the world” to her daughter; the mother in “Undone” abandons her family and ultimately kills herself. But the mother in “Five,” to offset tragedy with insight, delivers an emotional, arresting imperative to her daughter, considering the pervasiveness of television in this collection: “Turn off the TV.” Another maternal figure on her deathbed, Aunt Gracie in “The Rule Against Perpetuities,” whispers a sort of coda for the entire collection when she tells her granddaughter “Good luck on your test.” She means the bar exam, which the narrator has already flunked once, but you can’t help thinking she also means life in general — as if she’s made it to the end of her own, and now it’s her granddaughter’s turn.

The Secret Games of Words is bleak and brilliant in equal measure. It is also uniquely American, made so by the constant background noise of TV from a particular era, rife with angst and regret.

Karen Stefano is Fiction Editor for Connotation Press. Her stories have appeared in The South Carolina Review, Tampa Review, Santa Fe Literary Review, Epiphany, and elsewhere. Karen was nominated for the XXXVIII Pushcart Prize. She lives in Southern California and is currently at work on a novel.

Christopher Allen’s book reviews have appeared at PANK, The Lit Pub, Word Riot, Necessary Fiction, Books at Fictionaut and more. Read his short fiction in Indiana Review, Night Train, Contrary, SmokeLong Quarterly: the Best of the First Ten Years and many other sweet places. He splits his time between Dublin and Munich and blogs about his crazy life HERE.