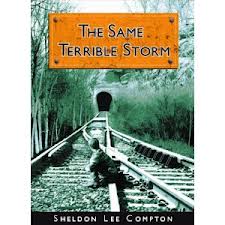 The stories in Sheldon Lee Compton’s début collection The Same Terrible Storm are a neat fit for their title. Of course, The Same Terrible Storm is also the name of one of the stories in the collection, but each story, especially the longer ones, suit this notion of storm—of rage, outburst, eruption, hurricane, all of these definitions and more—in one way or another. Each story has, at its center, its own horrible explosion and Compton’s careful, voice-inflected prose circles these tense moments in a way that feels much like a dance.

The wind skirted across the pond and slid beneath the sill. A spirit breeze spiked with pine needles and some circled the bedroom and took hold of her ribbed waist. She would go to the pond and wait, wait for Pete to return with his hound from hell and Van to join her and for Kent to arrive to the place of his redemption or rest where rooftop clouds would collide, where, like always, not a single drop of rain would touch the cracked marble of her skin.

How wonderful is the alliteration in this section of the titular story—all those s’s, plus that “hound from hell” where another writer might have been content to leave off with hound and sadly lose all the rhythm in the triplet phrasing, and then, finally the switch from the s’s to a series of hard k’s (Kent, collide, like, cracked, skin) that foreshadow the movement of this particular piece from one of soft and hazy experience to a sharp and pointed confrontation, an unexpected blowing up.

The collection’s title comes from a sentence in this story and is in reference to a single character, a man who resides at the eye of whatever hurricane he creates. The notion is that he is irresistible but dangerous. And unavoidable. If this storm named Pete has come your way, be prepared, you cannot avoid it. This idea works as well for the other stories—even the ones without a similar character. That terrible storm may be what’s been handed to you on that unfair platter of fate, or it may be a tornado of your own creation. Regardless, Compton’s stories are about what it feels like once the winds have already picked up, once the rain is already lashing down upon the landscape of your life.

Even a quieter story like “Discount Paint for Houses,” has this incredible menace. A young mother with her three kids, painting their house together on a hot day. They’ve spent the rest of their money, and it was money needed for something else, on this last ditch attempt at domestic repair. The narrator here is the oldest child and she’s so worried about what’s happening—the uneven color of the paint, the fumes they are breathing, the heat, the sunburn the youngest is taking, the job she passed up to help out today—but she keeps quiet, keeps working, keeps watching. Despite the heat of this day and the strength of the sun, she and her family are fighting, in their quiet desperate way, the storm raging around them.

Kerry’s voice in “Discount Paint for Houses” is just one example of Compton’s ability to inhabit his characters through voice. The variety of voices on offer in this collection is a delight. Perhaps my favorite comes from “Lesson,” a short monologue from a parent (most like a mother) to her child:

You know that Collins boy who got his leg chewed up good a few days ago just a couple turns from here? Well this has to do with that. Do you ever see anything strange when you’re up in the hills like that? Well, you know, like a fence around this big old mess of weeds. Any dogs barking their heads off? Well, listen, wild dogs are something you have to watch for all the time this part of the year, and the fences, too, and not just at the breaks. And sometimes wires running across patches of high weeds, about two, three inches off the ground. Get into some high grass and them wires are tough to spot. I’ll tell you what I’m talking about.

Even the stories set in the third person make use of Compton’s evident skill at rendering voice through dialogue. We hear his characters in a way that brings them closer, that localizes them within our head, not just visually but audiovisually—it works to give each man, woman, child or teenager an incredibly substantive presence.

Aside from the title and the theme it invokes, these stories are also unified through their Appalachian setting, or, in a few exceptions, they are rooted in a memory of Appalachia. These are tales involving poverty, coal mining, alcohol and other substance abuse, broken families, violence and redemption-seeking Christianity. Compton neither pulls his punches nor romanticizes or glorifies these subjects. His stories do not plead or judge. The Same Terrible Storm is a first-rate collection of earnest voices and careful stories.

Sheldon Lee Compton lives in Eastern Kentucky. His work has appeared in numerous journals and been nominated for several awards, as well as anthologized on many occasions. He is a past founder and editor of three literary journals.