The Refugees by Viet Thanh Nguyen 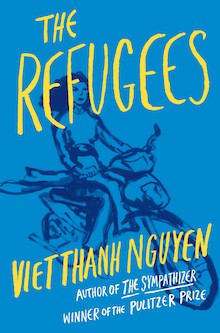 About his 1980 novel Antwerp, Chilean author Roberto Bolaño once said: “I wrote this book for the ghosts, who, because they’re outside of time, are the only ones with time.” In an age of closing borders and building walls, it is no surprise that Viet Thanh Nguyen, author of the 2016 Pulitzer Prize winning novel The Sympathizer, has included this as one of the opening quotes to his debut collection of short fiction, The Refugees. After all, those who seek refuge from war, famine, and natural disaster often move through two worlds, caught in the space between the past and present, as ghosts of sorts.

In addition to the book’s timeliness—the number of refugees, displaced people, and asylum-seekers surpassed sixty million, according to National Public Radio—it is also personal. Nguyen’s family fled Vietnam and moved to the United States as refugees in 1975. In the eight stories that comprise The Refugees, Nguyen offers a diverse group of characters—some protagonists are Vietnamese, others are American, but most are Vietnamese-American. Like the ghosts Bolaño refers to in Antwerp, these refugees are as haunted by their memories as they are by the passage of time.

The first story, “Black-Eyed Women,” confronts this idea of ghostliness directly. The female protagonist is a refugee living with her aging mother. Because her family left war torn Vietnam for “a country where possessions counted for everything,” she discovers that her family “had no possessions except our stories.” Perhaps this is why she took a job ghostwriting the memoirs of those who were “kidnapped and kept prisoner for years, suffer[ed] humiliation in a sex scandal, and surviv[ed] something typically fatal.” After she asks a grieving client if he believes in ghosts, his answer haunts her: “When I close my eyes, my wife and children appear just like when they were alive…they move fast and disappear before I can focus on them.”

Next, the protagonist is visited by an actual ghost—a disembodied spirit bearing a resemblance to her deceased fifteen-year-old brother, killed decades ago by Thai pirates. She must combat a pain writing cannot heal. Still clothed in the “black shorts and ragged gray T-shirt” she last saw him in, the protagonist weeps for her brother, “for all the years we could have had together but didn’t. But she also cries for who she used to be, “for those other girls who had vanished and not come back, including myself.” In this modern ghost story of wandering souls, Nguyen examines survivor’s guilt. Although these wounds might seem invisible, they still cut deeply.

From Ho Chi Minh City to San Francisco, from Angkor Wat to Echo Park, the theme of invisibility is present regardless of the stories’ settings. The second story, “The Other Man,” chronicles the culture shock experienced by a young Vietnamese refugee, Liem, who moves to the Bay Area to live with two gay men, Marcus and Parrish. As Liem sits in a restaurant in Chinatown, the “sight of Asian crowds comforting him,” he cannot help but feel ashamed of his past, for “the prospect of rehearsing his [refugee] story one more time flooded him with dread.” A new kind of shame surfaces for Liem when he begins to notice the appeal of “Marcus’s lean, pale body.” Here, Nguyen probes alienation through the lens of LGBTQIA invisibility in Asian culture.

Nguyen’s other stories discuss the invisibility of illness. “The Transplant” is as much about the act of donating organs as it is about betrayal; “I’d Love You to Want Me” wrestles with loyalty as well as dementia; and “War Years” juxtaposes one Vietnamese-American boy’s paranoid adolescence—“I wondered if a Communist boy was sleeping under my bed”—against a very real home invasion involving a white man and a gun. “I still think of him, every now and again,” the boy explains, suggesting symptoms of Post-Traumatic Stress Disorder, “especially on Sunday mornings during mass when I rose from kneeling.” Kneeling, once a gesture of spiritual surrender, takes on new meaning for the boy after he is forced to kneel before the would-be burglar.

Later, Nguyen revisits family stories, centering on the disconnect between generations. “The Americans” follows a retired B-52 pilot who returns to Vietnam to visit his daughter, an English teacher who vows to “do some good and make up for some of the things [her father has] done.” The penultimate story, “Someone Else Besides You,” combines a father’s infidelity and a mother’s terminal illness with a son’s subsequent divorce. Finally, “Fatherland” brings readers back to Vietnam, “the haunted country,” to meet two half-sisters—one raised in Vietnam and the other in The United States. As Phuong desperately tries to make up for lost time with her sister Vivien, imagining her glamorous life in America, she begins to believe that “their father loved Vivien more.” “Fatherland” is an appropriate bookend to “Black-Eyed Women” because it reinforces the idea that memories shape us, across oceans as well as generations, leaving ghosts in our minds and sometimes in the mirror.

Viet Thanh Nguyen was born in Vietnam and raised in America. His novel The Sympathizer won the 2016 Pulitzer Prize for Fiction, as well as five other awards. He is also the author of the nonfiction books Nothing Ever Dies and Race and Resistance. The Aerol Arnold Professor of English and American Studies and Ethnicity at the University of Southern California, he lives in Los Angeles.