The Princess, the King and the Anarchist by Robert Pagani 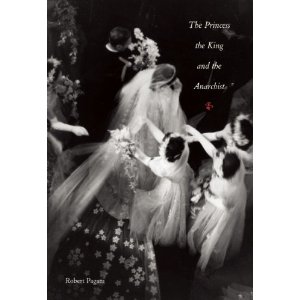 The day she became queen, there were lots of flowers, lots of noise[s], lots of blood and lots of dead bodies, but she wasn’t particularly surprised.

These opening lines of a delightful and amusing first novel by Swiss playwright Robert Pagani set the intimate tone for the story, told essentially by the three main characters named in the title.

The first voice the reader hears is that of the princess, actually already queen of Spain and wife of the king as the novel opens. The original French title Mon roi, mon amour (My king, my love) immediately puts the emphasis on the queen as the main character/narrator: it is her story, with flashbacks and interjections from the king and the anarchist. The English title gives equal weight to the three protagonists.

On 31 May 1906 King Alfonso XIII of Spain married HRH Princess Victoria Eugenie Julia Ena of Battenberg, granddaughter of Queen Victoria, in the royal monastery of San Geronimo in Madrid. On their way back to the palace, the royal couple narrowly escaped death when a bomb, hidden in a bouquet of flowers thrown from a balcony by anarchist Mateu Morral, exploded next to their carriage, killing and wounding guards and bystanders.

Pagani takes the bare facts of this historical event as his starting point and embroiders his story behind the headlines. This is not a historical novel so its credibility need not be a concern. The names of the princess and the anarchist are changed—perhaps to show these are not the people we think.

As part of the series, “Letters to my bookseller,” at the Association Internationale des Librairies Francophone, Pagani introduces his text as follows:

The imagination of novelists is boundless. But the story of a young queen who, on her wedding night, chooses—out of love for her new king—to give herself first to a criminal in order to spare her husband the unpleasant task (she imagines) of taking her virginity, is nevertheless, you will agree, quite unusual.

The author places the action, then demonstrates that one can never know what lies behind or inside reported events. Historical context adds distance and the reader is entertained, taken first-hand into the narrators’ confidence so as to suspend disbelief. This is fiction (“imagination”). The title has the ring of a fairy story. We can smile at the innocence of the protagonists and not have to take seriously the shortcomings of royalty or anarchists. The reader can feel superior that such things could not happen nowadays or in reality.

The three narrators are sympathetic. We see their weaknesses: bodily in the case of king and queen, intellectually in the case of the anarchist (who constantly refers to his mentor, Ferrer).

Their voices cleverly carry the story and the author’s powers of imagination allow him to slip in asides, references, for the reader’s further reflection. For example, the queen on several occasions thinks about war and death:

Those cries—dead! dead!—will re-echo in her head from year to year, beyond the fracas of a great war, and then another great war, and many lesser but still terrible wars between those two, before and after, and during the course of a long life.

Another example is found when the anarchist repeats the words of his mentor on the necessity to change society—even though he questions their stark requirements, particularly as regards the breaking of family structures: “Neither family nor nation.”

So what is the author trying to show us, within this unusual story of a young queen whose love for her husband leads her to sleep with a criminal? There are many threads. That royalty is human: fragile, vulnerable, with bodily functions? To be king is a thankless task:

Kings “do” everything and, in return for their sacrifice, people want to kill them. It’s unjust but it can’t be helped. We will never prevent the sick fringes of society from committing horrible acts.

That in extreme situations, one reverts to role? The king and the princess are seen to behave in character after the assassination attempt: she manages, despite the blood; he jollies along a German princess. The anarchist, romantic and inspired but brainwashed, carrying out orders, has no escape plan. After months of preparation, he has failed in his mission to kill the king. Ferrer will try again in six months’ time: “Kings must die.”

As the story reaches its climax, each character recalls a childhood memory of hiding and not being found, of innocence and happiness:

Seven years old. He had hidden in a clump of begonias. They were looking for him everywhere … It was so much fun. Mother was crying. The tutor was crying … In the meantime, there he was, right there, invisible. Invisible, immobile, and all-powerful. Turned to stone with joy. (p. 78) [the king]

The world was beautiful. He didn’t know then that this magnificent world was also cruel and, most especially, unjust. One must never stop being innocent. He really should have died in childhood. At seven years of age … He had gone down the slope again but, rather than joining his father directly in order to dispel his fears, decided to play a trick on him and had hidden behind a boulder. Father continued to call out his name, He had let him call a long time, too long, perhaps. He regretted it to this day. (p. 80) [the anarchist]

… when she was nine … she had stayed up there, just because, out of pure pleasure. For the pleasure of knowing they would look for her, which indeed they did … It was delicious. She shivered, at that moment, out of sheer innocence … Mother had been crazy with anguish: it was just after Father’s death. Finally she had reappeared for Mummy’s sake. She had told a huge lie, her one and only, simply because the truth was impossible to articulate. After that, she never lied again. “I went to sleep.” (p.82) [the princess]

The idea of individuals being hidden, then revealed, is central: how different are these characters from appearances, how true this is in general. Beware of preconceived ideas, stereotypes, jumping to conclusions, assumptions. We cannot know what lies beneath the surface.

The Princess, the King and the Anarchist is filled with lyrical passages describing happiness (e.g., the anarchist as a child, pp.79-80) or shock (the princess’s inability to function, pp.54-55).

And everywhere there is humour – obvious from the beginning in the tone of voice of the protagonists and the way the reader is shown their inner workings. Beyond this, there are funny episodes, such as that of Princess Pilar’s brooch falling into her soup and its subsequent rescue (retold later by the Princess in her letter to her mother, with added twists: was it a Chinaman or a Japanese?). There is the tantalising number 4623, the number of times the music professor and his wife had congress and (coincidentally) the number of times the king’s ancestor had fits of depression. There is the Queen Mother who despairs of her son’s manners …

There are marked differences between the presentation of the French original and the English translation—perhaps in anticipation of different audience expectations: the title (already mentioned), the cover and layout of the book, the addition of an introduction … all imply that the English text could be seen as historical fiction, whereas the French original is a more nuanced, neutral presentation, leaving its interpretation up to the reader.

The translation itself is sometimes questionable:

But the overall text does justice to the original and allows a non-French-reading audience to sample the delights of this unusual short novel. If it is a fairy story, it should have a happy ending. And it does: the anarchist has, without trying, accidentally, displaced the king and taken the virginity of the princess, his bride! Who could possibly have imagined it? And only the reader knows.

Robert Pagani is a retired United Nations translator. He is the author of over twenty plays, many of which have aired on the Radio Suisse Romande, the Swiss National Radio station. Originally from the canton of Ticino in Switzerland, he is 74 years old and The Princess, the King and the Anarchist is his first novel.