The President In Her Towers: a report by Tom Whalen 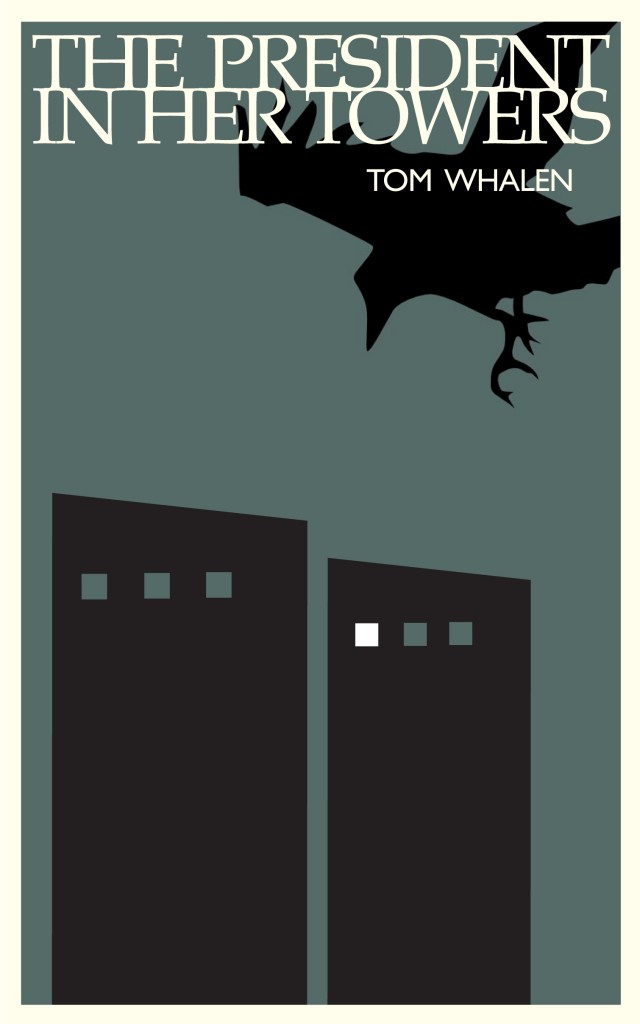 The first thing to catch my eye was, of course, the cover—a beautifully minimalist design by Corey Frost. You may not be able to judge a book by the cover, but you can judge the publisher’s commitment to and belief in the book, and Ellipsis’ belief is obviously strong; with good reason.

I then turned to the back cover and read the synopsis and endorsement: ‘…a deft satire of bureaucracy, paranoia, professional envy…’. Any reference to bureaucratic dystopia usually has the reviewer reaching for the K-word, which tends to short-circuit further critical evaluation.

But to paraphrase Tolstoy: all utopias are alike; every dystopia is dystopian in its own way. So we need to examine, and enjoy, the particularity of Whalen’s dystopia—if that is what it is.

Other-worldly too is the university (or universe-ity) she presides over, as seen in the early roll call of Deans: the Dean of Why I Am Here, the Dean of Let Me Have It… the Dean of Happenstance, the Dean of Neuroscience, the Dean of Petrography… the Dean of the Sestina, the Dean of Pessimism… The titles are accumulated over the course of the novel, with increasing ingenuity (we are however warned, in an aside by the narrator, that he may have lost something in his translation).

What we confront, then, is Whalen’s own version of the Gnostic Universe, as The Castle was Kafka’s. There are subtle hints to this in the few references to music: Satie’s ‘Gnossiennes’ and Miles Davis’s ESP. This subtlety is one of the hallmarks of Whalen’s style.

The plot is simple in itself, and acts as much as a thread in the labyrinth as a structuring device: the narrator, Thomas, has been plucked (I choose the word carefully) from his gas attendant’s job in Arkansas by the President as she passes through, to be her personal assistant in an unnamed German university. He is the latest in a line of assistants, and learns late in the novel the fate of some of his predecessors. His duties are simple: to report. On anything and everything that may have a bearing on the President’s plans, may (or may not) be beyond her all-seeing vision, and may, above all, involve the plans of her enemies, who are everywhere plotting her downfall.

The real interest of the novel, though, lies in its ambience, the nature of the university and the country beyond. We are in Germany, but a Germany half-modern, half-mediaeval, and wholly fictive.

An early description of the Towers—there are two, for the Sciences and for the Humanities – describes their upper stories being permanently veiled with mists, and this called to my mind Breughel’s Tower of Babel in either version, coming as it did after a chapter entitled “Language Difficulties.” Uncanny, then, to come across a later scene in the novel which is explicitly described as like a Breughel painting of rustic peasants.

Breughel is a brooding presence throughout, in fact. His painting Hunters In The Snow—January of The Scenes of the Months—is the landscape that forms the backdrop to the novel, a backdrop of perpetual snow and fog.

But he also prefigures one of Whalen’s techniques. Breughel painted a number of canvases in an established tradition of his time wherein common proverbs were turned into visually literal images: the blind leading the blind, a man falling between two stools, etc.

The novel has a frontispiece plate which, easy to overlook, provides a clue to this technique. It is an oil-on-wood panel from the 1670s, depicting a man’s head, bearded and merging into a bird’s body, on bird’s legs, and, most grotesquely, with a long swan-like neck protruding from the forehead, the neck arched to peck the man’s nose. It is housed in the Tiroler Volkskunstmuseum and illustrates an idiomatic expression: to “take yourself by your nose.” But it also has a title: Vogel-Selbsterkenntnis or “Bird Of Self-knowledge.” This has a double significance in the novel.

Early on, there is an extraordinary scene (extraordinary even within the texture of the novel) where this painting comes to enactment. The President, faced with the problem of a large and growing number of gypsy squatters in the university, and under pressure from her enemies to find a solution, suddenly sprouts feathers, wings and a swan-neck and after pecking her nose, carries the gypsies and a terrified Thomas, all clinging to the feathers, in a flight across the mountains.

In that scene, the President identifies herself explicitly as the Bird of Self-knowledge, and in a later scene, invites Thomas on another flight, in pursuit of his own self-knowledge. He declines.

What we have, then, in this novel, is a metaphysical or rather epistemological thriller-cum-fairy tale. In his questioning of his feelings for the President, from seduced adoration to doubt and self-doubt, Thomas probes the limits of his desire for knowledge and self-knowledge, his propensity for accepting the Faustian pact of omniscience offered him by the President. In doing so, he attempts to come to terms with his own unitary self-hood (although officially known as Herr Abjectus, his name varies throughout the novel, every interlocutor addressing him by a different name, often several, usually derogatory; he is a multiplicity of no great worth to the Deans).

This reading is, interestingly, supported by an intricate although brief mise-en-abyme which I won’t give away. It is, though, a cerebration, an abstraction. The excitement lies in the physical, in the fictive detail, in the snowglitter of exuberant creativity. To the details already mentioned I could add: the potted rubber plants that turn up in office after office, with or without stuffed (or real?) birds; the effusion of Deans; the Head-in-Progress —a Mount Rushmore-sized mechanical contrivance; the similarly contrived and equally mysterious Artifical Eye; the Gestation Chamber…

This is the stuff of the Sleep Of Reason; the Wittgensteinian silence that lies at the boundary of thought and proves to be a lucid nightmare, but it is this silence that writers are compelled, Faust-like, to explore.

No writer I have come across explores metaphysical silence quite like Whalen. As readers we, like Thomas, like the gypsies, simply give in, cling to the wings of the author’s imagination, and enjoy, half-terrified, half-elated, the views over the snow-bound, fog-wreathed fictive landscape.

Tom Whalen is a novelist, short story writer, poet, and critic who has written for Agni, Bookforum, Film Quarterly, The Iowa Review, The Quarterly, the Washington Post and other publications. Co-editor of the Robert Walser Number of The Review of Contemporary Fiction, he has translated and written extensively on Walser’s work. He teaches film at the State Academy of Art and Design in Stuttgart, Germany, and American Studies at the universities of Freiburg and Bamberg.

Born in 1949, David Rose has spent his working life in the Post Office, coming to writing fiction late in life—his mid-thirties. His debut story was published in the Literary Review in 1989, since then around fifty stories have been published in magazines and small presses. His first novel, Vault was published by Salt in 2011 and is due to be reissued in a second edition this autumn, along with a short story collection, Posthumous Stories. He was for some years fiction editor of Main Street Journal.