The Poison that Purifies You by Elizabeth Kadetsky 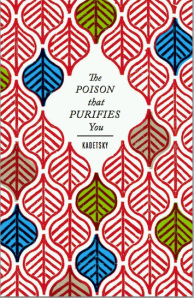 In The Poison that Purifies You, Elizabeth Kadetsky offers ten variations on the theme of vulnerability. Since social life provides many opportunities to play on the vulnerabilities of others, the stories in this accomplished collection are densely populated, like the cities in which most of them take place, and touched with a certain skepticism about social life—there so many others, and they are all so close—that has marked the literature of urban modernity since Baudelaire. Characters appear and disappear like almost-familiar faces on the subway; they suffer bedbugs and allergies, delusions of infestation and equally strong fears of being left alone. Kadetsky’s characters are exquisitely vulnerable, at the mercy of toxins and microbes, hustlers and cons—not to mention their own, more or less acknowledged aggression.

When the avenue of nourishing attachment to others is also the avenue of attack by them, the natural and expectable result is anxiety. One way to cope is to deny it. If what you need also causes you to suffer, split the need from the pain and repress your knowledge of what connects the two. Kadetzsky’s characters know how to play this game. They struggle, however, when anxieties accumulate around the repression. One woman grows so anxious over relatively small infringements on others—some not even her fault—that she will break out in a rash at any touch. With a finger, her doctor writes her name in painful welts on her skin, a kind of scarlet letter in which punishment is self-administered by means of an immune system kicked into overdrive.

Other characters who suffer similarly are better defended—but, as Kadetsky shows again and again, this only gets them so far. An American visiting Dehli takes a silly pride in his ability to sleep comfortably in a city he finds exceedingly dirty. “Sleeping on a mattress cover is not uncomfortable,” Jack reports. “It only requires you to imagine your relationship to the people around you differently.” With this appeal to imagination, Jack invests the use of a mattress cover with the power to mediate an intimacy at once feared and desired. The mere need for a mattress cover “requires you to allow [other people] closer to you, in every way. Raw and unwashed, the uncovered mattress connects you to the person who was here before you. And by association, it allows you closer to all of New Delhi.” As the story proceeds, Jack’s obsession with hygiene is shown for what it is, a cheap defense against recognizing his own mixed feelings about the “raw and unwashed,” himself among them. Unfortunately for Jack, this solution leaves him dangerously self-obsessed and, thus distracted, he becomes a mark in a seductive con’s game. Clearly there are worse fates than running out of Purell.

But keeping two mutually exclusive realities in play is distracting, and it is in the space created by this distraction that trouble takes root. In “Loup Garou,” for instance, a woman struggles with a substantial relationship, unsure whether to stay or leave. When her boyfriend suggests visiting a strip club, her ambivalence enlarges to blindingly grotesque proportions:

It was as if there were two distinct realities coexisting together in this strip bar, one where Morey and I were a couple, and one in which we’d never met. The two lined up atop one another like a piece of glass on, say, a map, where the space between them makes it impossible to see where you’re headed.

As in “The Poison that Purifies You,” just when she is most distracted by her inner division, is when she is seduced by an outsider with an agenda. He steals the car, stranding her and Morey on a remote road. No wedding has occurred. Yet here they are, on the far side of what has come to seem like an unacknowledged honeymoon, in the disillusioned badlands where marriages really begin.

Deep self-knowledge is beyond the scope of Kadetsky’s project in The Poison the Purifies You. Radetsky’s characters flail until their stories implode or disperse. In “The Indian Friend,” which may be the collection’s most ambitious story, five friends go to dinner in Delhi. Only Rajesh speaks the local language; he orders for the group while the rest behave boorishly, in the manner of culture-shocked tourists. While Rajesh is the most interesting character by far, Kadetsky keeps the reader closest to Marcus who, eating with his fingers, lovingly describes the way they feel in his mouth. With this play on the idea of “finger food,” Kadetsky quietly highlights the infantilism of the whole group. It would be easy, at this point, to discover Rajesh as an admirable way-maker, a local who is polite to foreigners and indulgent of their flaws. But Kadetsky has other plans. As dinner proceeds, we understand that Rajesh may have been involved in a scam that relieved one of the dinner guests of some cash. The trusted outsider becomes an object of suspicion. “We are a country,” Rajesh explains, “of desperate people and entrepreneurs.” It is important that we should never be sure which side of that fence he is on. Likeable Rajesh may be a scoundrel; one of his boorish dinner companions may be the innocent victim of a scam. Or: A group of characters who cannot see through the fog of their privilege comes into close and trusting contact with an outsider to whom that privilege is not merely obvious but also signals the presence of an exploitable vulnerability. What to do? Kadetsky makes it impossible to decide. Food and furniture fly everywhere; the scene dissolves into slapstick. When it comes to the pretensions of the young and inexperienced, perhaps there is nothing to do but satirize them. Are they not, in the end, just funny?

It is only in “Geography,” the collection’s closing and most completely realized piece, that Kadetsky hints at some solutions to the double-bind caused by ambivalence. The narrator is a Iraq veteran suffering from symptoms of PTSD, insomnia especially, after being attacked by another soldier in her unit. For her, ordinary social trust—“that people are not murderous and strangers will not harm you“—has been irretrievably lost. She doesn’t trust the world enough to close her eyes in her own apartment, and for good reason. Yet it is still necessary “to get through the day,” to operate in a world where such trust is, by and large, not misplaced. She understands her symptoms as produced from this contradiction.

You’ve got two contradictory realities existing simultaneously in your head, and they have to exist in your mind comfortably side by side. Your mind can’t grasp that. Instead it chooses one version or the other, and spins into an endless loop convincing itself first of one reality and then the other, and before you know it you’ve got a wrench twisting up what was once a machine, quietly humming with happy untruths.

Her verdict? “Better to let it hum.”

Elizabeth Kadetsky is also the author of a memoir, First There Is a Mountain, Little Brown and a novella, On the Island at the Center of the Center of the World, Nouvella Books. Her short stories have been chosen for a Pushcart Prize, Best New American Voices, and two Best American Short Stories notable citations, and her personal essays have appeared in The New York Times, Guernica, Santa Monica Review, Antioch Review, Post Road, Agni, and elsewhere. .

Diane Josefowicz’s fiction has appeared in Conjunctions, Fence, and the Saint Ann’s Review. She teaches in the undergraduate writing program at Boston University.