The Petals of Your Eyes by Aimee Parkison 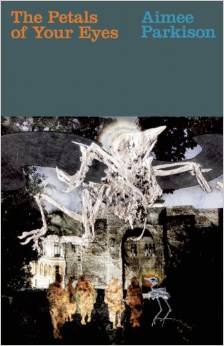 In this world, perception costs too much. Speaking from within the “secret theater,” the narrator reports dreamily and unconvincingly on her surroundings: “Restless rivers nestle deep valleys. Miles away from desert caves and cities of sea, misty mountains rise.” This would be lovely, perhaps, were it not so clichéd. This is not a criticism. Parkison’s point may well be that no more accurate perception is possible in this place where even dream reports sound second-hand, drawn from tourist brochures. Indeed, it is hard to be sure that the narrator sees anything at all, for in the next breath she reports that “[m]ountain vines hide the theater’s gates,” and even the barred windows are hard to see, “glimpsed through cracks in the cabinet doors.” In this constricted world, reality is most convincingly rendered in the language of sex tourism: “Pay enough money to the right person,” the narrator tells us, “and travel for hours across several borders, and you’ll find me and my sister.”

The narrator and her sister, along with another captive, are led, sometimes terrified and occasionally soothed, by a character called “no one’s daughter”. This ambiguous figure, deprived of even capital letters on her non-name, brokers relations between the captives and the brothel’s clientele on one hand, and the theater’s higher-ups on the other. As the narrator follows no one’s daughter, Parkison shows the fluid ease with which power corrupts everyone, at every level, in a closed social system. Victims and victimizers exchange roles, turning the psyche into a kind of cash economy, with suffering the coin of the realm. Even the innocent desire to know and understand the source of this suffering is perverted, through a convoluted illogic, into fractured, pseudo-syllogistic explanations like this one:

Where we live, the old director isn’t allowed to have a daughter, but he is allowed to have sex with the daughter he doesn’t have. If his sin is worse than a sin, it’s no sin at all because nothing can be worse than what it is…This is the very logic that allows him to have her night after night and to do with her what he pleases.

Parkison generalizes incest to include category confusions of all sorts, mingling the biological, familial, and psychological with the bureaucratic. All four realms are ingeniously yoked, moreover, to ensure that the madness is robustly self-perpetuating, by means of forced pregnancies of the inmates, who give birth to children destined, in turn, for the cabinets. When the children die, the living play games with their bones.

It’s a sad truth that those who are brutalized virtually always go on to brutalize others, and this rule is operative in Parkison’s novel as well. But perhaps the most pernicious trajectory Parkison charts is the damage that the brutalized, in the end, do to themselves. The narrator gets caught up in a sexual game that requires not only her consent to being brutalized, but also her willingness to let her tormentor off the hook, so that forgiveness—that small, private grace that might have returned a modicum of peace to the lives of the girls in this novel—becomes co-opted, a necessary part of just another performance in the secret theater.

When she finally began to realize something was wrong, the game changed. He was the soldier and she was the captive. Yet if they played the game well, she pretended that she never knew he needed to wound her in order to hold her. He left her in the secret theater, so she could walk alone through the gated garden filled with bones.

Not even the qualified and limited escape of forgiveness, of “letting go,” is available.

So much violence raises questions about survival, and it is here that Parkison proposes a modest role for art. At one point, late in the novel, no one’s daughter withdraws to the garden where she makes marionettes out of the theater’s dead children:

She keeps creating a new family out of bones. Making her own world—a better world—from the corpses, she becomes a ventriloquist and a master puppeteer. She finds ways to make the little skeletons call in soft and pleasant voices.

For the narrator, no one’s daughter models survival through making things up, fictionalizing, inventing: “No one’s daughter teaches me many things by never questioning if the [dead] infants were her own. She survives sorrow through invention, through never questioning.” The juxtaposition of invention and capitulation troubles, as it should. In this way, the book raises urgent, if familiar, questions about the larger purposes of art.

Aimee Parkison is an associate professor of English at the University of North Carolina at Charlotte. Parkison has received a Christopher Isherwood Fellowship, a Writers at Work Fellowship, and a Kurt Vonnegut Fiction Prize from North American Review. Her first collection, Woman with Dark Horses, won the Starcherone Prize for Innovative Fiction, judged by Cris Mazza. Parkison has an MFA in creative writing from Cornell University. She lives in Charlotte, North Carolina.

Diane Josefowicz is a regular reviewer for Necessary Fiction. Her fiction has appeared in Conjunctions, Fence, and the Saint Ann’s Review. She teaches in the undergraduate writing program at Boston University.