The Other Room by Kim Triedman 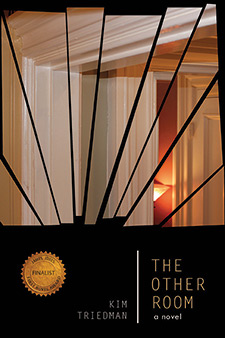 The Other Room is not about recovery from grief. Claudia, the main character in Kim Triedman’s novel, says:

From the start I understood that one does not recover from the death of a child. It is only that one continues to live.

This book is about a family continuing to live despite the upheaval of horrendous tragedy, despite aftershocks that destabilize old fissures.

“It is not one story, even to me,” says Claudia, and so the sudden, somewhat mysterious, death of her daughter, Lily, is recounted in fragmented chapters, from the alternating perspectives of Claudia, her husband Josef, and Claudia’s twin Yvonne. To understand the impact of Lily’s death, we explore the family’s older damage. Set mostly in New York, 1997, the novel shifts back three years to Lily’s death, then further back still. Then forward, to Claudia’s new life in Antigua. It is deft, unhurried storytelling.

In the days before Thanksgiving, Claudia feels “an explosion out there, waiting to happen.” She and Josef are uneasy with each other. Distance grows between them. They are reeling from Lily’s death, but also Claudia’s subsequent depression and suicide attempt. Claudia’s editing career stalls as she becomes increasingly focused on her therapist Stuart, to whom she offers words in hope of connection.

Josef, a surgeon, numbs himself with vodka while carrying out a lusty affair with Kiera. He simultaneously craves and avoids feeling anything. He buffers himself with lies.

Yvonne keeps herself too busy to think much. She’s successful in all the ways Claudia is not, but Yvonne is coming apart. She suffers agonizing headaches. She’s impatient with her husband and three kids.

The shaky bond between Yvonne and Claudia dates back to when they were thirteen and their mother died in a car crash. Claudia remembers the moment they learned of her death. Yvonne went to their father, Mac, knowing just what to do:

Yvonne was there, right there beside him…already filling in the empty space…by the time I looked around and saw them…there was simply no place left to go. No lap. No cheek. No room.

From then on, Yvonne and Mac have a bond that excludes Claudia. It is a fissure that weakens the foundation Claudia builds her life upon, the foundation that collapses with Lily’s death.

Claudia knows she’s expected to grieve “the right way: neatly, considerately,” as Yvonne did for their mother. But Claudia is going through the motions. She’s detached from herself. She knows:

…to the rest of the world we are valued above all else for our ability to deny it betray it forget it ever happened: to survive.

Yvonne is impatient with her, but Yvonne can’t know what it is to have one child, now dead. And Claudia doesn’t understand how deeply Yvonne is shaken. It is Yvonne who finds Claudia, following her suicide attempt. Yvonne’s role in the family is not easy, despite what Claudia thinks. Yvonne cleans messes, fills space. She silences her screams.

Josef’s role is keeping Claudia safe, keeping them going. He develops a blocked tear duct, a manifestation of his efforts to control his own grief for Claudia’s sake. He navigates as best he can, as demonstrated by his walk through the dark, empty house, ending in Lily’s room:

Perhaps it was the darkness, perhaps he needed that: the way it threw no shadows…Perhaps it was its own comfort, knowing that these moments were his alone, this blackness, this silence.

Josef is unfaithful, yes, but there is sacrifice in his love. Claudia may long for intimacy, having clawed her way ashore from the tar pits of depression, but Josef needs raw, physical gratification. Kiera “keeps some tiny part of him alive…Lately she’s the only way he knows to feel the inside of his own skin.”

Triedman also writes poetry, and the benefits are evident in her lyrical, highly symbolic prose. There are several “other rooms” offering refuge: for Josef, Lily’s empty bedroom. For Claudia, Stuart’s office, but also Mac’s basement, where she visits old paintings of her mother. Sometimes they’re more abstract: the space Claudia used to occupy in her father’s heart; the writing that sustained her in childhood and might again.

Occasional passages feel overwritten. In one flashback, Claudia and Josef demonstrate fundamentally different viewpoints through a lengthy discussion of paint colors. Triedman is a skillful writer; she should trust her readers to understand sooner. And one pet peeve—too many eyes perform impossible actions. They drift, pull, settle, creep and tiptoe, even “prowl the room like hungry cats.” It’s distracting.

Usually, though, Triedman’s descriptions satisfy, delivering deeper meaning. Claudia attempts to shake a stray hair from her hand, and we know the hair stands for everything she wants to be free of: her hopeless marriage, her sense of failure, her “absence of child.” The hair, a newly discovered gray, sticks despite her best efforts. It catches on her wedding band.

More poignant still is a flashback to when Claudia, heavily pregnant with Lily, discovers a baby bird fallen from its nest. Claudia lies down, curling her body around it. The bird flails beside Claudia’s swollen belly, which holds Lily, who will also die young. Josef joins Claudia, and together they watch the bird take its last breath. It is a beautiful, terrible scene.

Near the end, Mac writes to Claudia: “there are so many things in this life we never know…until they sit themselves down in our laps and stare us in the face.” The Other Room is about seeing, finally. Understanding, forgiving, our family and ourselves. For Claudia, it’s a return to herself. Her move to Antigua, where her mother spent time as a child, allows reconciliation with the past.

This gorgeous novel satisfies readers fascinated by the complexity of grief and human behavior. It is wise. It knows small, personal stories can offer far-reaching truth. How we continue to live when recovery is not possible—that is a story worth telling.

Kim Triedman has been writing poetry and fiction for over a decade. Her first volume of poetry, bathe in it or sleep, won the 2008 Main Street Rag Chapbook Competition and she has won or been shortlisted in over ten additional poetry and fiction competitions. Her first full-length poetry collection, Plum(b), is to be released in early 2013 by Main Street Rag Press. Her work has been published in Prairie Schooner, Salamander, Main Street Rag, Women Arts Quarterly, Poetry International, Atticus Review and numerous other literary journals and anthologies. For more information about Ms. Triedman, please visit her website at kimtriedman.net.

Susan Rukeyser writes stories because she can’t stop. Believe it, she’s tried. Most of them are fiction. Her work appears in Necessary Fiction, Metazen, WhiskeyPaper, Treehouse, and Monkeybicycle, among others. Find her here: www.susanrukeyser.com.