The Orange Suitcase by Joseph Riippi 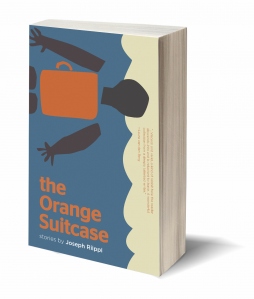 If you stand in front of the hors d’oeuvres table and nibble all night long, never making it to the main buffet with the meat and potatoes, you might walk away sated… stuffed, even. But did you have dinner? Maybe not. Of course, a person could live on appetizers a good long, happy time. Joseph Riippi’s book, The Orange Suitcase, is the literary equivalent of such a smorgasbord. It’s not a novel. It’s not a story, though there is a sort-of beginning, middle, and end in there, if you’re willing to shuffle through his many vignettes stashed in that titular suitcase full of memories to see the progress of his bachelor life toward a presumably happy marriage to the mysterious “L—.“ (Or not so mysterious. One vignette does mention a fully-named “Laura.”)

To the extent that this is a story, it might be the story of one young writer’s development in New York City in the days leading up to his marriage. He’s looking back at childhood moments in Seattle, some with grandparents and friends, some with relatives who died even before he was born. He’s describing dreams, and the real events that triggered them. He’s showing little moments with ex-girlfriends, some who tell awful jokes and make him dream about the jokes later, some who are girlfriends of his friends, and not his to joke or dream with. He flashes a few pieces involving his writer friends, drunken preparations for poetry readings out of state, references to other authors, living and dead, like Kerouac, Franzen, and even Melville, whose Moby Dick might have been alright “without all the whale-science shit.” It seems that any topic, any scrap of experience is fair game. Of course, to the reader, some are more poignant than others. Still standing at the hors d’oeuvres table, there’s a plate of stuffed mushroom caps that are now cold and greasy, and you wish you’d have known before you ate one. Mostly though, it’s highly edible fare.

When Riippi can’t build a scene around a great line – no matter, he just puts the line out in dialogue between a couple of unknown characters and lets it sit as a chapter. If a scene does not appear to progress his story, but it’s beautiful, it belongs, and he throws it in the suitcase. In the chapter titled “Something about Borges and the Blind in Chelsea,” Joseph sees a blind man in Starbucks, reading in Braille. He says:

Great stuff! In this case, it stands on its own, but it also fits into a bigger series of vignettes—with tropes on blindness, muteness, saying too much, (dreamed) violence, and childish vulgarity.

Most chapters, if that’s what to call them, are a page or two long. Most just deliver an image, sometimes a powerful one at that. There’s a grandfather who drives nails into trees with his bare hands. There’s a young neighbor boy named Ben whose father leaves a note before he goes to live with his gay lover. (There’s Joseph’s desire, years later, to know what that note said). There’s a terrible moment when Joseph-the-boy witnesses his grandfather disposing of newborn rabbits, so new they look like globs of dough, by throwing them into the lake. There’s an aching sadness as Joseph describes losing, or losing track of, his friend Ben. There is self-recrimination and shenanigans, both drunken and sober. There is publishing fun and frustration, works being renamed and revised and peer-criticized as something not fun to read, but rather “like fucking a knothole.” There is poetry on every single page. And there are photographs from Joseph Riipi’s family album—New York street scenes and Seattle family portraits are scattered throughout—to punctuate and validate his stories.

As an extended poem, a lovely little book to tuck in a bag for the train ride, this is wonderful. It is a very New York story in that respect, or New York set of stories… woven together in fits and starts, with honking and engines revving, quite dense at times, but ultimately not covering a whole lot of geography. In any case, The Orange Suitcase gets you across town, and it’s not a bad trip.