The Names of Things by John Colman Wood 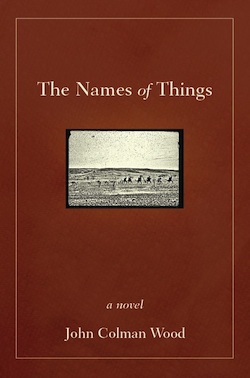 Every new generation grapples with similar ideas from its altered perspective. This is why, I believe, there are no exhausted subjects in literature. It’s a medium with ample room for re-discussion, re-questioning, and re-discovery. There is a wonderful tension between individual story (formed by specific experience and shaped by a particular time and culture) and collective experience (of the audience and their relationship to that story and its trappings). That tension is just one of the reasons why literature is so forgiving of the incessant retelling of certain themes—love, death, war, friendship, birth, illness, ageing… and so on.

As the world changes, so does the way we tell our stories. The movement of people around the globe, the interconnections, the advances in science and new movements in art, the access to areas once impossibly remote. These developments, whatever their direction, alter how we as humans deal with those oft-explored themes. John Colman Wood’s novel, The Names of Things, a quiet story with an ambitious and philosophical heart, is one such example of how a well-traveled theme becomes relevant and remarkable in its retelling. This isn’t just the transposition of a familiar story into an updated timeline; this is a story that takes all of its meaning from its contemporary context.

On the surface, The Names of Things is a simple novel of grief. Of one man’s negotiation of the empty spiritual and physical places created after the death of his wife. That’s a story that has been told a thousand times before. But not, I can safely say, in exactly the way that Wood tells it—building a narrative out of anthropological observations, easy travel (emphasis on easy) to a situation of extreme physical and mental isolation, and the asking of questions pertinent to the story’s 21st century setting. In short, what could be just another Grieving story becomes absolutely unique, even exotic.

The book even comments on this idea of retelling narratives and the subjective nature of stories. In a digression based on a memory of a conversation, the book’s unnamed protagonist, an anthropologist, and his wife, a painter, are on a road trip at some point early in their marriage, discussing the ideas of objectivity and subjectivity—both extremely relevant to their professional lives. As an anthropologist he is meant to favor the objective recording, the accuracy of lists and non-fiction reporting. As a painter, she pushes for him to agree that no recording, no “story” is ever completely objective.

The Names of Things returns again and again to this question of accuracy and objectivity/subjectivity because it is also an anthropological novel, a study of a culture and a small group of nomadic people in Eastern Africa. This isn’t a separate storyline, but integral to what happens to the man who has just lost his wife. The book’s present tense story (and much, though not all of its past) is set in Africa, where the protagonist has returned to an earlier work site, not because he has research to do, but because it is a place that holds strong memories for him, of himself and of the wife he’s recently lost.

This new trip to Africa is, in one sense, a fact-checking expedition. The anthropologist wants to revisit his memories, revisit the “story” of his marriage and most importantly, the story of his wife’s illness and death. He is interested in whether it’s possible to create an objective account of what happened and who they were to each other.

The narrative working to tell this story is a beautifully slow one. Despite Wood’s real skill at building emotionally-urgent scenes, the book is a contemplative and careful read, filled with passages like this one:

Here and there stood old black trees, big-boned as oaks, scraggly, deep crevasses in the bark… They didn’t seem real. They were ideas of trees, just as the mountains were someone else’s ideas of mountains. Perhaps that was it. These mountains were here with the first humans. There was a good chance that an ancestor, back in the original breath of the place, saw the same mountains, the same slopes, surely not much less eroded than they were now. Perhaps these were the prototypes of all mountains for all of human experience, laid down in what a famous anthropologist once called genetic memory, misting into view anytime someone dreamt of mountains or drew them from imagination.

This is not a book to speed through; that would be a real shame. Instead, the reader follows the protagonist through his present-tense journey to revisit pastoralist camps in Africa and to find answers to certain questions raised after his wife’s death, as well as through different periods of his past-tense life—his early marriage, his time in Africa with his wife, the painful months of her dying, and the empty months after her death. These timelines are mixed well, done both linearly and at random, in the way that memories appear out of nowhere, triggered by the slenderest of cues.

For such a quiet book, there are several sources of real tension. Some are quite superficial, in the sense that they are issues of “story” and how his journey will turn out. This superficiality does not reduce any of their power. But there are other, more subtle tension builders and one turns out to be the very personal nature of his journey. From an anthropological perspective, his reasons for returning to these pastoralist camps is so personal it becomes almost selfish:

Not that his selfishness becomes a problem, per se. He does not ask or require anything from the Dasse camps he visits, but he is aware that he is expecting his time in the camps to help him or heal him in some way. He is looking for resolution or at least a pathway out of his grief. Part of this process involves contemplating Dasse burial, funeral and grieving practices. He has spent his life observing others, trying to work out the meaning in their actions and words and combination thereof. Now this practice becomes a lifesaver. And yet he remains aware of the futility of this expectation.

Eventually this relates to the book’s resolution. Despite several instances of effective foreshadowing, The Names of Things ends with a surprise twist. As a reader, I found myself torn between seeing the inevitability of what happens to our anthropologist protagonist (or, I should say, what he wants to have happen), and feeling that this finale was an evasion of an ending that would have been more difficult for the writer to execute. There are no tidy endings to a grieving process, and the book speaks to this difficult fact with honesty. Despite that, in some way Wood seems to be reaching for a kind of neatness, a symmetry of experience between the novel’s characters. Although that symmetry generates a very real feeling of pathos, it also gives the ending an unsettling and excessive logic. I wouldn’t want this question to turn you away from the book as a whole, however, because the simple elegance of the 250 pages of reading that lead up to this final moment are well worth the contrary opinions it may elicit from its varied readers.

John Colman Wood teaches at the University of North Carolina at Asheville. His field research with Gabra nomads of northern Kenya and southern Ethiopia has been funded by the Wenner-Gren Foundation, the National Geographic Society, and the Max Planck Institute for Social Anthropology. His fiction has appeared in Anthropology and Humanism, and he has twice won the Ethnographic Fiction Prize of the Society for Humanistic Anthropology. He is the author of When Men Are Women: Manhood among Gabra Nomads of East Africa (University of Wisconsin Press, 1999). Before becoming an anthropologist, Wood was a journalist.

Michelle Bailat-Jones is a writer and translator living in Switzerland. Her fiction, translations and reviews have appeared or are forthcoming in various journals, including Ascent, The Kenyon Review, Xenith, Hayden’s Ferry Review, Atticus Review, The Quarterly Conversation, Cerise Press and Fogged Clarity. She is the Reviews Editor here at Necessary Fiction.