The Miracles of Ordinary Men by Amanda Leduc 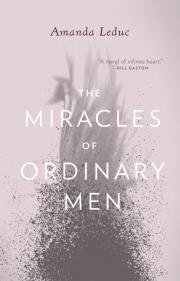 Divine intervention is hardly a blessing for Lilah and Sam in Amanda Leduc’s The Miracles of Ordinary Men, and a belief in uplifting, heavenly intercessions is but one of the expectations that Leduc bucks in this ambitious novel. Questioning our wants is not simply a thematic concern in the novel, but one that manifests itself through Leduc’s formal innovations: she infuses this novel with hints of magical realism, a collage of biblical and literary references, and a narrative framework that resists an easy resolution by alternating between Lilah and Sam’s searches for a cosmic, godly rationale.

At its simplest, this novel is a story of dreams deferred: Lilah, an itinerant world traveler, has returned to her native city in order to watch over her homeless brother and her ailing mother; Sam wanders Vancouver and hankers for earlier, easier times after his fiancée has called off their engagement, his mother has died, and his teaching career has collapsed. But this is just the novel’s veneer. Lilah, whose return home has stranded her in a sequence of unfulfilling romances and a dead-end secretarial job, finds herself inexplicably enamored with her boss Israel Riviera, whose striking façade covers for a secret identity, a misogynistic and sadistic streak justified through the Book of Corinthian’s rhetoric of women’s sexual submission. Even more cryptic are Israel’s predilection for expensive coffees that only Lilah is permitted to purchase, his reliance on his subservient chauffeur Emmanuel, and his fascination with what will happen to Lilah should her mother die and should her homeless brother Timothy vanish. And Sam, his life dissolving around him, has sprouted angelic wings as the rest of his body rapidly withers and ages, and he gradually distances himself from his ex-fiancée, best friend, a concerned student, and the priest who serves as his confidante.

Neither protagonist knows how to decipher these new circumstances, events occurring in a reality somewhere between absolutes. This generates an existential crisis for Lilah and Sam: how can one be alone in an ordeal, even while surrounded by people? To weather this conundrum, they latch to anchors in their own narrative arcs, and the failure of these connections drives the narrative deeper into the characters’ emotional states. Lilah tethers herself to the fantasy of the camaraderie she shared with Timothy during their youth—a connection that Israel seeks to manipulate. Lilah predicates her yearning for unadulterated partnership in the memory of cups of hot chocolate shared during childhood: “Once upon a time,” Lilah recollects in encountering Timothy, “he’d been ten years old, slipping milk in her hot chocolate. Her co-conspirator in life.” But adulthood has not afforded her the luxury of such a co-conspirator, forcing her to tap the inner store of her resolve. Sam fares little better. He endures the throes of his transitioning body under the guidance of Father Jim, who encourages Sam to find answers in the stories from Sam’s high school syllabi—including stories by Franz Kafka, García Marquez, Alice Munro, Doris Lessing, and more—while insisting that “God isn’t heavy on explaining.”

The only character to embrace the novel’s indefinite state of affairs is Timothy, Lilah’s brother and the bridge between the novel’s two major plot strains. Having observed Timothy in a divine metamorphosis of his own, Sam ushers the vagrant boy into his home and offers him shelter. It is through Timothy that the novel most explicitly pronounces its refusal to work toward a simple resolution. When Sam laments that others cannot see his wings, Timothy outlines the characters’ relationship with God and the divine:

“What does that mean?”

“It means whatever it means,” said the boy. “Not God—but we’re not us, anymore, either. We exist in between now.”

Reveling in this uncertainty, this existing in between, Leduc’s novel also repudiates our expectations from the genres of lyrical and magical realism. Aesthetically, the novel deftly assembles a bricolage of biblical and literary allusions. Lilah’s internal response to the constant banter over God sums the novel’s use of these references in charting the inscrutable core of human experience: Lilah thinks, “God. Why is it that her life always leads her here?” And Leduc treads dangerously close to overplaying this hand, especially with such pairings as the svelte Israel, who is quite literally delivered to Lilah by the chauffeur Emmanuel, whose name translates literally to “God with us.”

To counterbalance the religious allusions, Leduc draws from the traditions of magical realism, and her style channels the influences of such writers as García Márquez, Salman Rushdie, and others. Sam’s transformation into an angel, for instance, echoes the description of the fallen and festering angel in García Márquez’s “A Very Old Man with Enormous Wings.” García Márquez’s old man reeks of seawater, is “dressed like a ragpicker,” and possesses “only a few faded hairs left on his bald skull and very few teeth in his mouth.” While García Márquez’s angel is odious, Leduc’s Sam is tragically beautiful, off-putting precisely because his heavenly presence is strangely terrestrial. When he fears that the ocean’s stench in his wings will make him odious, his former student Emma hugs him and informs him that the scent is pleasant and natural, if not tantalizing: “You smell like water,” she tells him, “You smell like the sea.” Leduc’s description of his physical changes is likewise sentimental and wrenching, linking us closer to Sam as opposed to distancing us as does García Márquez’s depiction of the raggedy old man. For instance, the morning after embracing Emma, Sam further morphs into something unearthly yet human, living yet textual:

The next morning, in the bathroom, he washed his hands and watched his fingernails flake into the sink, brittle and old, like the skin that had dried in the night. He stood before the sink and shook. The veins in his hands grew darker, more pronounced. They travelled up his arms, across his torso, wove around his ribcage. Like spiderwebs, or calligraphy in a language he couldn’t understand.

Sam’s gradual transition from man to angel to divine messenger is delicately wrought with this sort of diction, which juxtaposes the body and the nature of language. Sam is at once a sensitive, emoting person and a character, a figure textually inscribed through this transformation’s reliance on the rhetoric of writing—calligraphy and language, for instance—alongside the presence of religious narratives and magical realist prose. In this way, Leduc sculpts these allusions into something of her own, and she carefully avoids presenting a mere allegory. The biblical names alone—Lilah (short for Delilah, the temptress of Samson), Sam, Timothy, Israel, Emmanuel, Father Jim—caution us that the monikers alone do not offer a map. Sam, for instance, could refer to the prophet Samuel or the judge Samson, renowned for his superhuman strength, and Lilah herself is no seducer, but the victim of Israel’s charm. The references are not a schema, but a playful touch on Leduc’s part; she insists on letting the characters become human by acting on their own teeming passions, and no expectations or authorial stiffarming, no allusions to other texts, will dictate how these figures behave.

The novel is no less ambitious formally in its breakdown of narrative rules, and navigating this fragmentation rewards the reader by charting their struggles with solitude. The chapters run in two sequences—one in numbers spelled out as words, the other in Roman numerals—which count down from ten to one while alternating between Lilah’s and Sam’s perspectives, highlighting their losses and their survival. Leduc also fractures temporality in this novel, suggesting that any resolution—any final outcome—is instead the initiation of a new story. The first chapter, for instance, launches in a climactic moment when Sam, wings fully grown, resurrects his cat Chickenhead after a car accident; this would seem to promise positive transformation, a novel of happy miracles. However, the remainder of the chapter traces backward in time to the morning when Sam, foggy from a hangover, feels twinges of sharp pain in his back and then notices that the wings have first budded from his scapulae as little knobs. Restoring Chickenhead to life—an omen of possibility—gradually tarnishes as Leduc deftly narrates, in reverse, the early painful and disturbing phases of Sam’s mutation.

Even as The Miracles of Ordinary Men upsets reader expectations of literary genres, forms, and tropes, this novel offers the promise of latent potential, hinging on Lilah’s and Sam’s encounters with the human and divine alike. Lilah’s struggle for autonomy during her affair with Israel, Sam’s grapple with the transition into seraphic form: these experiences warn the reader of the fraught nature of heavenly assurances, even while insinuating that the true source of the divine wells deep within the human soul. Yet, though this essence remains invisible and inexpressible, Leduc’s willingness to break narrative conventions, coupled with her precise deployment of literary and biblical allusions, allows her novel to eloquently traverse the territory between religious covenants and human aspirations.

Amanda Leduc was born in Canada and has lived in England, British Columbia, Ontario, and Scotland. She has published across Canada, the US, and the UK, and been shortlisted for a number of awards, among them the 2012 (and 2008) PRISM International Short Fiction Contest, the 2012 TNQ Edna Staebler Personal Essay Contest, the 2008 UK Daily Mail First Novel Award, and the 2006 CBC Literary Awards.