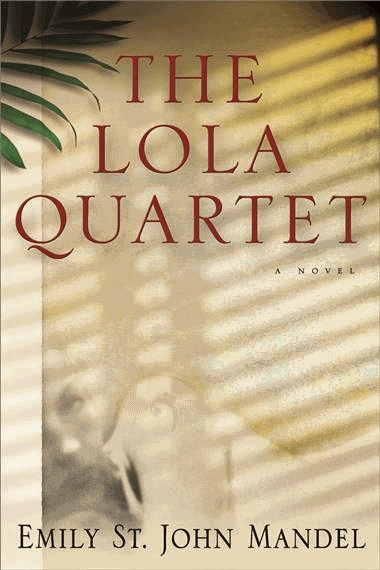 The Lola Quartet takes its name from a high school jazz band within the story. The quartet’s members are Jack, Daniel, Gavin and Sasha: four different instruments, four different voices. Like with all music, the success of a performed piece depends on the contrast, the rhythm and the eventual harmony or discord of these voices playing together, as well as the emotional response their arrangement elicits in the listener.

The novel is structured in much the same way as this fictional quartet playing a piece of music—as they do in one key scene out of the back of a pickup truck. These four characters, plus a few others, all different voices, work together to “play” a story to the reader, to create a rise and fall of solicited emotion. The story being told is about mistakes made in one’s youth and how these kinds of errors can follow a person long into adulthood. The single greatest mistake of The Lola Quartet centers on Anna Montgomery. Anna is Sasha’s sister as well as girlfriend to two of the band members and she commits her mistake as an unwed teen mother; she steals 121,000 dollars from a meth dealer who temporarily gave her shelter at the end of her pregnancy and just after giving birth. This impulsive and somewhat ignorant act is what propels the narrative, set ten years after the theft.

With any multi-voice and multi-story narrative there is a risk of glossing too quickly over important emotional moments in the rush to get to the next person’s story. It’s perhaps often better to err on this side of the short/long equation—especially in a book that tips its hat gracefully to the noir detective story—but Mandel’s writing and pacing is strong enough to withstand a little inflation, a few more pauses to savor what is being played out between her characters. The Lola Quartet touches on a multitude of personal issues in its 10-year-after-the-event setting: Jack has given up his musical ambitions and is now unemployed and addicted to painkillers, Gavin has simultaneously lost his fiancée and the baby they were expecting together, Daniel is now a twice-divorced police officer with four kids and money problems, and Sasha is working at a 24-hour diner, taking it one day at a time against a serious gambling addiction.

This is a lot of background to pack into one book, especially one that resists lingering too long in any one story. Yet despite the way the book sometimes feels like it may burst with tangential story, these pieces do manage to fit together perfectly to inform Anna’s story. Which is also Gavin’s story more than anyone else’s.

If Anna is caught up in the furied winds of The Lola Quartet’s hurricane, then Gavin sits at its center, in the calm of the eye, looking out at the destruction and trying to make sense of the storm. Anna’s mistake is Gavin’s mystery to solve.

Like any good homage to literary noir, The Lola Quartet deals in suspense. From the opening chapter with Anna waiting for help on a playground while that dangerous wad of cash hangs heavy and toxic from the bottom of her infant baby’s stroller, to the final “handoff” with its complicated moral implications, The Lola Quartet cultivates the reader’s sense of dread. These characters, mostly vulnerable to us for their relative youth and precarious lifestyles, move through different levels of danger. They are all at-risk from the dangers of the self as well as from various perpetrators of exterior menace.

Finally, something Mandel does exceptionally well is mediate her story through the intricacies of guilt and self-protection. No one in The Lola Quartet is given the luxury of an easy decision or a free pass out of the book’s events. Mandel gives us a world of gray zones, compromises, and complex negotiations. Her characters have secrets in their past and nurse the wounds of lingering failures. This makes for hard realities and a complicated moral universe. Mandel is kind enough, generous enough, however, to temper what could become an overwhelmingly pessimistic story with a subtle dash of hope.

Emily St. John Mandel was born on the west coast of British Columbia, Canada. She studied at The School of Toronto Dance Theatre and lived briefly in Montreal before relocating to New York. Her first novel, Last Night in Montreal, was a finalist for Foreword Magazine’s 2009 Book of the Year. Her second novel, The Singer’s Gun, recently released in paperback, won the Indie Bookseller’s Choice Award and was the #1 Indie Next Pick for May 2010. Currently a staff writer for The Millions, she is married and lives in Brooklyn.