The Legacy of Lost Things by Aida Zilelian 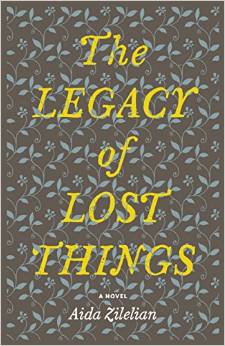 For Armenian Americans who have read countless books dealing directly with the Armenian Genocide of 1915, this is a commemorative year we have mixed feelings about. Mournful of crimes that haven’t been atoned for in the past 100 years, we brace ourselves to be bombarded with images, reflections, and analysis of a terrible moment in history. Like all causes for greater human rights, it’s necessary to keep demanding justice, but I feel I have reached a saturation point with books detailing the degradation of the genocide, like Roxane Gay when she says she can no longer read brutal descriptions of slavery. I thus found it a relief to open up Aida Zilelian’s The Legacy of Lost Things, an intimate novel that explores the ways tradition entraps and trauma erupts within a contemporary Armenian American family. Here, historical violence is neither detailed nor ignored, but its legacy runs bone deep.

The plot is immediately suspenseful: a mournful family is longing for their missing daughter who has run away from home. Araxi, fleeing her unhappy family life, makes her way across the U.S. with her best friend, Cecile, while her family in Queens copes with her absence, confronting memories of cultural loss and domestic violence. Along the way, Araxi faces a grave danger and her parents seem headed towards divorce or worse. Detailed stories from three generations of Araxi’s family reveal patterns of violence, fear, longing, and tradition, traversing Armenian communities from Bucharest and Beirut, to Queens, to the present expanse of Araxi and Cecile’s road trip.

In chapters headed with the characters’ names, Zilelian’s omniscient narrator never settles on one character for too long in revealing family patterns that involve shame, betrayal, insecurity, escape, and devotion. Weaving back and forth in time, the narrative touches on the origins of Araxi’s parents’ broken love story and the mistakes of her grandmother and aunt, overly devoted to their respective sons. Such a structure allows Zilelian to explore the flaws and strengths of each character, who play different roles to each other. When Sophie struggles with the absence of both her older sister Araxi and her emotionally distant mother Tamar, her insecure, sometimes abusive father Levon comforts her. In the 70s, Anoush holds her teenage daughter Lucine under such strict scrutiny that she runs away from home, and yet later, Grandmother Anoush provides a protective buffer for her granddaughters from her son Levon’s unhappy marriage to Tamar. With a nod to the absurdism of Camus, Zilelian unflinchingly portrays her characters as they struggle with cultural expectations to marry for family, not love, forced to make pained decisions in the blindness of youth. As Tamar poignantly states at a key moment, “You’ll find that when you can’t find the answer to something you eventually have to forget about it.” Through her direct language and attention to detail, it’s clear that Zilelian loves these characters.

For as much as The Legacy of Lost Things is about violence, it is also about love. Whether it’s a woman who adopts a son not much younger than she, or star-crossed lovers who betray their spouses, love binds each story together in devastating ways. Love serves as a comfort in a time of need: Sophie’s crush on a boy who lives across the street, Araxi’s affection for an independent teen, Cecile’s complex consideration of a fellow traveler. One criticism of the book: these young male characters seem to be variations of the same floppy-haired, stabilizing love interest.

But boys are not the main focus; female characters take center stage, including the Thelma and Louise relationship of Cecile and Araxi. At various points, each girl takes charge, one becoming stronger when the other falters. This makes for an interesting dynamic given their mothers’ very different parenting styles. Within Cecile’s and Araxi’s friendship, we see reflections of American and Armenian culture in contrast through the story’s main conflict: how does one stay true to oneself and to family, without succumbing to painful patterns?

Though the genocide is only felt in the distance, its history explains why the family was scattered to various parts of the world, adopting more language and culture while also encountering more war and upheaval. In The Legacy of Lost Things, Aida Zilelian bravely captures and finds release in the dynamics of longing that drive individuals, a family, and a culture. A reader will thus find life embraced, in all its love and pain. One hundred years after the genocide, we’re now able to read about its legacy of loss – and move beyond.

Aida Zilelian is a New York writer and English teacher. She has been published in several anthologies and over twenty-five literary journals including Per Contra, Red Fez, Wilderness House Literary Review, and Theurgy. She has read her work at various reading series’ in Queens and Manhattan including Sunday Salon, Phoenix Reading Series, Gartal, Rez Reading Series, Oh, Bernice!, and First Tuesdays. She is the curator of Boundless Tales, a reading series in Queens, NY. In 2011 her first novel The Hollowing Moon was one of the four semi-finalists of the Anderbo Novel Contest. The Legacy of Lost Things is her first published novel and was the recipient of the 2014 Tololyan Literary Award.

Nancy Agabian is the author of the poetry and performance collection Princes Freak (Beyond Baroque Books) and the memoir Me as her again: True Stories of an Armenian Daughter (Aunt Lute Books). She teaches writing at the Gallatin School of Individualized Study at NYU and through her community workshop series Heightening Stories. For more info, visit nancyagabian.com