The Islands by Carlos Gamerro 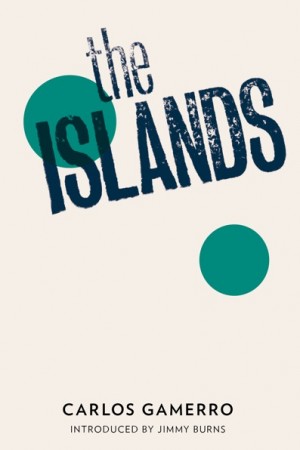 My knowledge of the Falklands War is limited to whatever bits I’ve picked up over the years from mentions in popular culture, newspapers, and international relations courses in college. Considering I’m neither British nor Argentinian, it’s unsurprising I’ve never been required to study the conflict, though the fact I instinctually refer to “the Falklands” rather than “the Malvinas” betrays which perspective I’ve gleaned my scant knowledge from — a bias I’d never considered before reading Carlos Gamerro’s The Islands. The novel was first published in 1998 but only recently translated into English by Ian Barnett — and a very British English, at times, increasing the disorienting effect — all creating further stretches of distance between the text, the war at its center, and me. That double or even triple removal gave the novel a surreal, dreamlike quality: it was easy, at times, to slip into reading the story as “just” any old dystopian fiction set in any old city, only to be brutally reminded again and again that this novel is set in and around a specific city, Buenos Aires, and takes on a specific political and cultural history, albeit at times in speculative or fantastic ways. To have my disorientation constantly, repeatedly shocked by those reminders gave The Islands incredible power, keeping me alert and uncomfortable and deeply engaged on multiple levels from the intellectual to the dramatic.

Structurally, the novel is built on the foundational tropes of a political/technological thriller, as Argentinian hacker and Malvinas veteran Felipe Félix narrates what follows his being lured into conducting an investigation for larger-than-life industrial magnate Fausto Tamerlán. Those familiar devices of genre — the behind-the-scenes machinations of secret cabals, for instance — never become stale but are enlivened and enriched by the constant tension between a sense of the story being a fabrication and a sense of being fabricated from something so real and using genuine experiences of individual and cultural suffering to create fiction that it is perhaps at its most real when it becomes most bizarre.

That sense of fabrication is all over The Islands, as every character lives in some way in a world of his or her own making, often tangible and imagined at once. A decade after the brief actual war the conflict still permeates and pollutes every facet of life down to the landscape itself. Veterans gather wearing obsolete uniforms in night classes, where they listen to deranged “experts” spin grand theories about the causes and legacies of the loss of the Malvinas and, always, how they will be won back. One former soldier fills his basement with a scale model of the Malvinas town where he was stationed, a project he will never be able to finish as he strives for deeper and deeper accuracy, allowing him to both relive his time there yet avoid reliving its always foregone conclusion. Yet another commissions a videogame — to be built by Felipe Félix — that will allow him to guide Argentine forces to victory over the British, again and again, however many times he returns. And a taxi driver in Buenos Aires navigates the streets of that city and the battlefields of the Malvinas at once, with fellow veteran Felipe captive in the backseat:

Two blocks further on we came out on Avenida Cabildo by an abyssal trough as deep as the Grand Canyon. ‘That’s a pain. I forgot all about the viaduct. The roadworks have been at a standstill for like five years, haven’t they? Would you look at those potholes. Reminds me of the valley we were stationed in. After the bombardment.’

‘There are no words to describe it,’ he said and immediately started searching for them while we reversed. ‘Two, no… three, four bombs a second were falling, you couldn’t put your head out of the foxhole, you couldn’t run, you shook inside there, like being in a blender, you felt like the walls were crushing you, your ears were exploding,’ he recounted, illustrating his point with the jolting of the taxi over the cobbled crocodile back of Calle Carranza. ‘We were all shouting, but nobody could even hear themselves, and the flares and the tracers…’

‘Turn! Turn on Soler!’ I bellowed, but he was already halfway down the next block.

More than just following the lives of ex-soldiers a decade after the still painful humiliation of their brief occupation then expulsion from the Malvinas, The Islands uses the tropes of the thriller to entangle those lives in vaster networks of power, surveillance, and control. That entanglement is acknowledged by the novel’s opening lines:

A fly caught in the web, while the spider, replete from its last meal, takes a while to reach him, can have a pretty good time of it if he relaxes while he waits. The threads are an almost intangible gossamer: they accompany the movements of his body without hampering it — as long as they aren’t too violent. […] Yes, they only become real when I try to wriggle free.

Felipe’s struggles when he inevitably does more than wait and relax become a masterful performance and complication of the genre, neither derailed by being too casual or dismissive — the way it sometimes can feel when “literary” writers ape the mystery, for instance — nor diminished by a predictability of characterization or plot that can result when thrillers rest too comfortably on type. It’s a big novel, a complex novel, almost overwhelming in the best possible way, and full of surprising twists and shifts in tone and style of which I’m reluctant to reveal too much. The effect, however, is for the entanglement and reduction of those individual lives to be rendered exciting, entertaining, darkly comic, brutal, and bleak at once — which is disorienting, but powerfully and productively so.

It is a novel in which the reader always feels like he or she — I, at least — almost knows what’s going on, almost has a handle on things, but with a sense there’s more than that out of sight. That sense is echoed in the story’s own architecture — ie, the way it is told — but also the architecture described in the course of the novel. At the start of the novel (and several times later), Felipe visits the twin tower headquarters of Tamerlán’s business empire in which glass walls, floors, and ceilings allow constant hierarchical surveillance of every employee, and the very interior layout of the building can shift to hide exits and cut off paths — a panoptic labyrinth with an illusion of openness. Soon after, he returns to his former workplace at state police agency SIDE, in a building built to an open plan but “in no time at all, an obstinate scale of divisions and partitions had narrowed it to such an extent that in several places you had to edge your way through.” This contrast between power that feigns transparency and sunlight versus power that acknowledges it secrets and shadowed warrens is a recurring question in the novel, as Felipe is ensnared in both, and as we — his readers — are ensnared in asking what it means to make “entertainment” out of such questions even as we thrill to how grippingly Gamerro does so.

That destabilizing of surfaces and structures (including genre) extends beyond architecture, as Gamerro reveals a hollowness in the very fabric of Argentinian life and, indeed, life over all. A lingering cultural nostalgia for Spanish colonialism is hilariously but sharply reduced to a pyramid scheme for selling cosmetics — i.e., superficial lies of appearance and disguise — and the residents of the Falklands, “Kelpers” nostalgically more English than the English, are made equally absurd. Even sex and drugs, abundant throughout the novel, are made joyless and cruel, not sources of pleasure but momentary means of enacting or lessening violence, as when the scars on a lover’s body diminish an act of passion with their intrusive, unavoidable reminder of tortures past. Everything is permeated by the war and not only the war but the violence and cruelty of the fascist system that spawned it. Perhaps the most powerful question raised in all this is how, in the face of a cruelty and violence that corrupts even our ability to apprehend beauty and pleasure, are we able to speak as ourselves and be whole — and, indeed, we learn that Felipe lost his voice for a year as a result of a head wound in the war, quite literally rendered mute by his experience of being drawn into that tangle of contradictions and confusions the conflict embodied, a web that ultimately, of course, can’t support the weight of its own overextended strands. One answer, perhaps, is to tell a story like this one: a story that doesn’t attempt to make suffering anonymously noble, or to make mere adventure out of violences and political machinations that are too serious to be only a backdrop to thrilling clichés, but does so much more by challenging expected roles of novel and genre and reader at once.

Carlos Gamerro is one of the best-known and most highly regarded contemporary Argentine writers. Born in Buenos Aires in 1962, he has published six works of fiction, including the novels The Islands and An Open Secret (the latter published by Pushkin Press in 2011). He adapted The Islands for a major theatrical production in 2011 and writes influential works of criticism. In addition, Gamerro, who was brought up bilingually in English and Spanish, has translated Shakespeare, Auden, and Harold Bloom.

Steve Himmer is the author of the novel The Bee-Loud Glade (Atticus Books, 2011) and the novellette, The Second Most Dangerous Job in America (Atticus Books, 2012). His short fiction has been published in various journals such as Monkeybicycle, PANK, The Los Angeles Review, Emprise Review and others. He is the editor here at Necessary Fiction.