The Honeymoon by Dinitia Smith 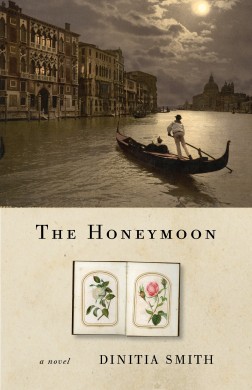 Every historical novel is a bereft love letter, written to—and for—a ghost. In Dinitia Smith’s The Honeymoon, that spectral figure is George Eliot (the pseudonym of Mary Ann Evans) as she embarks on a career in letters, a twenty-six-year love affair with George Henry Lewes, and a late-in-life marriage to the young, charming John Walter Cross. To portray Eliot, The Honeymoon emulates the incantatory realism of Eliot’s novels, using the Victorian author’s idioms to imagine her anxieties, desires, and hopes.

The novel’s opening passage mimics Eliot’s tale-teller’s voice, generating a mythic past that facilitates entry into her psyche: “One late afternoon in June of 1880,” Smith writes, “a rather famous woman sat in a railroad carriage traveling toward Venice with her new husband, a man twenty years her junior.” Like Eliot’s Silas Marner, a novel set in those “days when the spinning-wheels hummed busily,” The Honeymoon’s narrative voice parts the curtains of historical fact and ushers readers into a fictional dream: the folkloric past implied by that “one late afternoon” warms us to the “famous woman,” George Eliot, en route to Venice with Johnnie Cross. Here, Smith’s departures from verifiable details yield psychological, fictional truths: in 1880, Smith’s Eliot is forlorn from Lewes’s recent death, anxious to bring Johnnie joy, and desperate (even desolate) when—during the Venice honeymoon—Johnnie suffers a depressive episode that compels him to attempt suicide.

Eliot’s 1880 marriage to Johnnie, their honeymoon, and his mental illness generally appear as a curious footnote in accounts of Eliot’s career. In their diaries and letters, Eliot and Johnnie were circumspect about his melancholia in Venice, labeling it with euphemisms like an “attack of illness” or the ever exotic “typhus.” Perhaps this mystery explains why early praise for The Honeymoon gravitated toward Smith’s provocative work in illuminating Eliot’s final months, from the honeymoon until her death in December 1880.

However, Smith’s achievement is deeper, more intriguing, than a simple recounting of Eliot’s anguish over Johnnie’s suddenly aberrant behavior. When Eliot begins to suspect Johnnie’s malaise, she endures a restless night, disturbed by the ails of her past and without the consoling embrace of George Lewes:

But now she grasped only air. Next to her the bed was empty, the wide mattress white in the moonlight.

She’d had the same dream again and again for more than fifty years, but in the past, George had been there to comfort her. Instead, the memories of her childhood came pouring back, the loneliness returned. She was unable to sleep.

With this maneuver, Smith splices the honeymoon to Eliot’s private history—her upbringing, her love affairs, and her writing career. Smith’s craft is honed enough that Venice, Eliot’s dreams, and the past weave together without disruption. When Eliot later glimpses Lewes’s spirit in her hotel room, the moment seems neither uncanny nor supernatural. We accept it as a manifestation of her grief.

By running these narratives side by side, The Honeymoon melds the introspection of fiction with the narrative efficiency and urgency of a biopic. Smith faithfully recounts the woe wrought by the “Holy War” that arose between Eliot and her father when she renounced her Christian faith, while translating Strauss’s Life of Jesus. She similarly captures the emotional damage inflicted when her brother Isaac cut ties with her over her common-law marriage to George Lewes. From the evidence of Eliot’s letters and diaries, Smith surmises that a similar disenchantment occurred with Eliot’s lovers, including the philosopher Charles Bray and Westminster Review publisher John Chapman. Lewes—himself a married man with children—had to dismantle Eliot’s wariness about “free love”:

Here was another man who believed in “free love.” And yet he seemed so worn down by despair, broken. She believed, or she wanted to believe, she thought, the truthfulness of his regret, his sorrow. In spite of herself she was moved [. . .]. He didn’t ask for sympathy or praise for his decision not to abandon his family.

Lewes’s tenderness toward Eliot and her creative ambitions stirs a desire to see her twilight days brimming with joy; Johnnie’s battle with mental illness drives us to seek solace for Eliot in Lewes’s steady affection.

The dramatic pull of these narratives, however, is not the only device binding readers to Eliot. Smith’s prose often ventriloquizes Eliot’s style—a technique that, as novelist A.S. Byatt observes, demonstrates the writer’s “love for the dead.” Consider, for instance, when Smith ventriloquizes Eliot’s sensibility and style in this epiphany:

She knew now that she needed something, which, unlike love, unlike George himself, could never be taken from her: the indestructible attributes of talent and genius, the ability of intellect and imagination to forge a link between present and past, between the pain and the happiness she had known; the capacity to give coherence to her existence through language, through music and the variability and flexibility of words.

The emotional swell in this passage—her yearning for the “indestructible attributes of talent and genius”—rises to a pitch found in Eliot’s novels. Smith executes this mimicry almost perfectly, though on occasion it produces some troubled syntax and the unnecessary repetition of details, like the later chapters’ fixation on Johnnie’s “Scottish-American accent.”

Regardless, Smith’s novel resolves Virginia Woolf’s observation that “to read George Eliot attentively is to become aware how little one knows about her.” The Honeymoon is nothing less than a séance: through the alchemy of biographical precision and fictional speculations, Smith conjures for readers a vivid, sensual, and endearing account of George Eliot’s life.

Dinitia Smith is the author of four novels, including The Illusionist, which was a New York Times Notable Book of the Year. Her stories have appeared in numerous publications and she has won a number of awards for her writing, including fellowships from the National Endowment for the Arts and the Ingram Merrill Foundation. For eleven years, Smith was a cultural correspondent for the New York Times specializing in literature and the arts. She is also an Emmy Award-winning filmmaker, and has taught literature at Columbia University, New York University, the Bread Loaf Writers Conference, and elsewhere. She lives in New York City with her husband, the historian David Nasaw, and she has two sons.

Patrick Thomas Henry is the fiction and poetry editor for Modern Language Studies. His short fiction, poetry, and reviews have appeared in Duende, Green Briar Review, Revolution House, and Sugar House Review, amongst others. He lives in Alexandria, VA, with his wife and their cat.