The Greenhouse by Auður Ava Ólafsdóttir 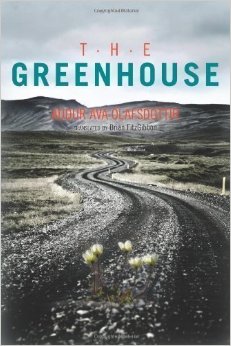 In The Greenhouse by Auður Ava Ólafsdóttir (translated by Brian FitzGibbon), a young Icelandic man loses his mother, uproots a bundle of rose plants from her greenhouse and travels to a far away monastery in another country, the site of a once-famous rose garden now fallen into almost complete disarray. At the monastery, Lobbi’s goal is to work and think, to sort out his anxieties about the body, about death, about his solitude and, eventually, his future. Mixed up alongside this journey and these meditations is a parallel narrative of his new and accidental fatherhood.

The Greenhouse is one of those books that very simply and quietly embraces an astonishing number of complicated questions: the death of a mother, the existence of a brain-damaged twin brother, young parenthood, accidental parenthood, family relationships, religious relevance to modern life, the meaning of sex, the shadow of death.

The simplicity and the subtlety of these discussions is what makes them work. Nothing is overly heavy, but neither is it dismissed or treated as trite. For much of the book, Lobbi is either driving somewhere on his own or working somewhere on his own. His solitude very naturally gives rise to his questions—and one of the strengths of Ólafsdóttir’s writing is that she manages to mimic the manner in which thoughts naturally come into someone’s mind (which can often be random and strange), and yet make them meaningful to the narrative as a whole and the novel’s central questions:

I’m in the middle of the woods, literally surrounded by trees on every side, and I haven’t the faintest idea of where I am. Can a person who has been brought up in the heart of a thick dark forest, where one has to beat a path through multiple layers of trees just to take a letter to the post office, have any conception of what it’s like to spend one’s entire childhood waiting for a single tree to grow?

As signaled to the reader in the very first pages when Lobbi and his father, in the midst of preparing his farewell dinner, go back and forth about his leaving, about his accidental fatherhood and what it means to be going away from his child and the child’s mother, and with the subtext of Lobbi’s mother’s death between them at every moment, the biggest question in The Greenhouse revolves around the possibility of meaning in coincidence:

Dad doesn’t believe in coincidences, or at least not when it comes to major events in life such as birth and death. A life doesn’t start or end out of pure chance, he says. […] Dad looks on these things differently; the world is a cluster of numbers that hang together, making up the innermost core of creation, and the interpretation of dates can yield profound truths and beauty.

Words like coincidence and accident fill the book, as do the possible examples of each: Lobbi’s mother dies in a car accident, Lobbi’s child is conceived accidentally after a party, and even the least important story, of Lobbi’s damaged twin brother, gently re-phrases this same question of the coincidence or destiny of someone’s birth.

Interestingly, Ólafsdóttir works these questions through the narrative while keeping the reader in the shadow of the monastery. There are no overt religious discussions—no direct wondering at God’s hand in all these accidents—but instead there is place, there is the infrequent glimpse of a monk in his robes, there are moments of wonder inside a church.

Through Lobbi’s physical work in a monastery garden and his persistent, although often naïve or simply-stated metaphysical questions, the book involves a gentle tension between the world of the body and the world of the mind. This is further heightened in the mildly seeking conversations that arise between Lobbi and one of the monks, Father Thomas, a film fanatic, who diverts Lobbi’s questions (when he is bold enough to ask them) into descriptions of films or rather humorous attempts at philosophy. After an evening in which Lobbi divulges some of his worries, Father Thomas arrives at his door this next morning and says this:

The body is discussed in one hundred and fifty-two places in the Bible, death in one hundred and forty-nine, and roses and other forms of plants in two hundred and nineteen instances. I counted them for you. Plants took the longest; there are fig trees and grapevines hidden all over the place. The same applies to fruit and all the types of seeds.

He hands me a semi-crumpled sheet of squared paper with three columns of figures, and points at the totals he has double underlined at the bottom of each one, to corroborate his words; these three figures say everything that needs to be known about what lies in my heart.

All of this might make the book sound rather lofty. And curiously, it is not. It is even, in some ways, an awkward kind of book. The story moves slowly, building carefully to a series of small moments of narrative tension, and it resolves itself in that perfectly imperfect way that is the hallmark of so much literary fiction. The awkwardness comes not from the book’s structure or pacing or subject, but from the narrator’s own voice. Lobbi, who is only 22 years old, is the first person narrator of The Greenhouse and his way of speaking isn’t literary or sophisticated or lyrical. He remains unfailingly appropriate for his age, and yet once this becomes familiar enough to the reader, his candid style of approaching the world and his own difficult questions are both quite touching.

It struck me as very clever that a book so much about roots meanders its way through several countries, and that its characters are in constant motion. I mentioned parallel narratives above—his solitary meditations on life and the body and the story of his accidental fatherhood—and this holds true for most of the book until Lobbi’s new life and the one he left behind in Iceland come together near the end. It is neatly done and while the “confrontation” remains gentle, it has significant results for this young man in search of the difference between accident and destiny, between the past and the future, between physical connections and those, seemingly more important, that are both elusive and intangible.

Auður Ava Olafsdóttir was born in Iceland in 1958, studied art history in Paris and has lectured in History of Art at the University of Iceland. The Greenhouse won the DV Culture Award for literature and was nominated for the Nordic Council Literature Award. She is also the author of the recently published Butterflies in November (2013, Pushkin Press). She currently lives and works in Reykjavik.

Brian FitzGibbon has translated a vast array of film scripts, treatments, stage plays and novels, working exclusively into English from Italian, French and Icelandic. He translated the Icelandic cult classic, 101 Reykjavik (Faber & Faber, 2002) as well as numerous Icelandic plays and Italian screenplays and treatments. He is also a playwright and screenwriter.

Michelle Bailat-Jones is a writer and translator living in Switzerland. Her fiction, translations and reviews have appeared in various journals, including The Kenyon Review, The Quarterly Conversation, Spolia, PANK and Two Serious Ladies. Her translation of C.F. Ramuz’s modernist Swiss classic, Beauty on Earth, was published in 2013 by Onesuch Press. She is the Reviews Editor here at Necessary Fiction.
Share This