The Girl with Brown Fur by Stacey Levine 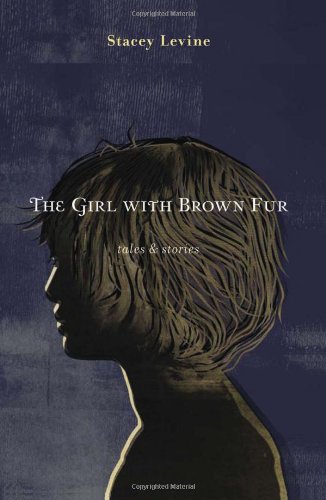 In the opening story of Stacey Levine’s The Girl With Brown Fur, a family is moving to Uppsala. It’s a real word and a real place, yet it’s one that sounds strange and slightly fantastic to an Anglophone ear. Suspending her readers between the familiar and the foreign is what Levine does best, and each story in this collection felt like its own fully-realized, self-contained world. There’s a unity of form and function from the level of plot to the level of syntax that makes for a unique, encompassing experience, and one that is marked by the double disorientation of both the language and the events of these stories seeming almost recognizable yet strangely alien at the same time.

Also in “Uppsala,” for instance, the story’s landscape is described as “snowaceous,” which isn’t a word but we still know, immediately, what it means, so it might as well be a word. Perhaps it even should be a word. The characters in this story, too, like those in the others, are almost like ourselves or people we know, and the strange situations they find themselves in are both like and unlike our own. It’s a disorientation that is most effective when one doesn’t trouble too much with the practical questions and simply slips into the world of the story, something we’re given advance warning of by the opening of “Uppsala” (and so the opening of the book):

We come from a bad family and we are disgraced.
“What time do we get there?” asks Brother.
“Stop cluttering your mind with those kinds of thoughts,” answers Mother.

In another story, “The Cats,” a character snorts at being offered some “magic seeds,” and it is explained,

“Well, that is one analogy we use,” said Mary. “The Frinth Foundation of Life is not crassly commercial. It is difficult to find the language to describe what we do,” she said. “It might even be easier using words from another language.”

Addressing that difficulty, and finding ways despite the limits of language to “describe what we do” as human beings living our strange, stupid lives, is Levine’s strength. Her characters, outsiders and strangers to themselves as much as to one another and to us as readers, tend to live marginal, often solitary lives. These stories are reminiscent of Gary Lutz’ fiction in both their upending language, and the upended lives of their characters. Not because they’re at all derivative — Levine’s voice is unmistakably her own — but because Lutz and Levine are quite rare in having so powerfully and so entirely staked out such bold, all-encompassing styles. In “The Danas” we find perhaps the most perfect sentence-level microcosm of that style:

These older children had always been quiet, even before birth, when they had existed only as streaks of bruise and absence in their mother’s psyche.

It’s a sentence that starts out familiar, easy to parse, as most of the stories do, and builds to a gradual strangeness so slowly and subtly that we’re guided into it without questioning quite where we’re going until that mirror-world has replaced our own and our disbelief is suspended for as long Levine wants it be.

The duration of that suspension, at times, is the one frustrating aspect of this collection. Even the shortest of these stories, sometimes only a couple of pages in length, are as adept at world-building and disorientation as the longest of them. They make an equal demand on the reader’s sense of language and possibility, so with those shortest stories I found myself wanting to linger and longing to explore those perfectly constructed fictional bubbles as deeply as I was able to in the longer stories. With each story such an emotional and intellectual readerly investment, and with each of them offering a fictional world subject to its own “rules” and surprises a reader must learn and relearn, endings were always jarring and I found I needed time to recover. That made it difficult to read these stories one after another. Instead, I tended to read a story, put the book down, and come back in a little while to read the next, which left a few of the shortest stories feeling like the work to reward ratio (if you’ll pardon the horrible corporate metaphor) was imbalanced.

In that way, though, the collection as a whole is disorientating in the same way as its individual stories and even its individual sentences, and makes the “project” of the collection feel all of a piece. The reader is always required to work, to struggle for a foothold, and that challenge is a risk for both writer and reader. Sometimes, as with “Believing It Was George Harrison,” that meant I never quite found my way into a story. More often, as with the masterpieces “Sausage,” “The Tree,” and so many others, these stories drew me in quickly and held my breathless attention for as long as they lasted, each of them as enveloping and absorbing as any novel. Every time I finished a story and looked up at the “real” world around me, it looked different, in some way changed, and that reflective disorientation is a feeling that has stayed with me long after closing the book, and it’s the feeling that always brings me back to Stacey Levine and her work.

Stacey Levine is the author of My Horse and Other Stories (PEN/West Fiction Award) and the novels Dra— and Frances Johnson (finalist, Washington State Book Award). She was awarded The Stranger Genius Prize for Literature in 2009.A Puschcart Prize nominee, her fiction has appeared in the Denver Quarterly, Fence, Tin House, The Fairy Tale Review, The Washington Review, the Iowa Review, Yeti, and other venues.

Steve Himmer is the editor here at Necessary Fiction. He is the author of the novel The Bee-Loud Glade (Atticus Books, 2011) and his short fiction has been published in various journals such as Monkeybicycle, PANK, The Los Angeles Review, Emprise Review and others.