The Faster I Walk, the Smaller I Am by Kjersti A. Skomsvold

Translated by Kerri A. Pierce 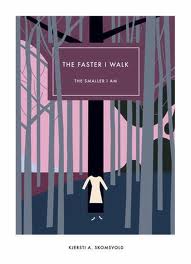 After a trip to the grocery store, one of several in the course of a novel as realistically quotidian as any one of our lives, Kjersti A. Skomsvold’s elderly protagonist Mathea reflects,

The bags are heavy and that’s a good thing, I’m sore after my night’s work, I like being sore, it tells me I’ve accomplished something. Soreness is probably my favorite feeling. Next to love, of course. Sometimes my tongue gets a little sore, and even though Epsilon always kisses without using his tongue, I always kiss with mine because then I know it’s there, the only muscle in the body that’s just attached at one end, a fact I don’t like to think about. It reminds me of everything I’ve lost. The kites I flew when I was a child—the string broke every time. The dog I walked, the leash that snapped, I never saw Stig again.

It’s a passage in which nothing happens, per se, and in which the narrator rambles from one idea to another in a free associative fashion that characterizes The Faster I Walk, The Smaller I Am. But there’s a motive, if not a method, to her madness: Mathea flails at her life, at the looming inevitable losses of kites and dogs and love and—overshadowing every word in the novel—the ever closer loss of life itself. Her rambling voice is itself a tongue, only halfway under control and fixed only at the root while searching desperately for a mooring and for a final, undeniable meaning to a life lived largely behind closed doors and closed lips. She’s a woman unable to will herself to ask cashiers for help at the store, who rushes away to avoid saying hello to her neighbors and sums up more or less her entire life when she says, “As soon as we were finished with school, Epsilon got a job and we got married and then it was just Epsilon and me.” Faced, now, with the question of what to make of a life she’s made so little of, she decides,

I need to expose myself more and more to death—without going too far, it’s a delicate balance—but then at last I’ll be able to live with the fact that I’m going to die. I figure this can be done in two ways so I draw up a list.

The novel itself, the structureless striving of it, mirrors Mathea’s voice perfectly. It is plotless and mundane, obsessed with the minutiae of a life built on avoiding life, and punctuated only with minor disruptions that become enormous by comparison—the brief, unexpected visit of a distant relative throwing life into chaos, or the difficulty of no longer being able jam jars. The single monumental event of her life, its one lightning strike moment, was meeting Epsilon—a boy as shy as Mathea herself—and falling in love; both before and after that connection, her life is anonymous to the point of being overlooked even by teachers who forget she’s in class. Lightning, she knows and perhaps even hopes, won’t strike twice and the rest of her life passes quietly and unnoticed by others.

There’s a disorienting effect to Mathea’s voice and the telling of her story, because those passages of the rambling mundane are punctuated by violent lightning strikes of language. Amidst descriptions of how she avoids other people, running the other way so she won’t have to speak, she reveals,

I talked Epsilon into buying a rabbit, but didn’t tell him it was because I couldn’t be alone in the apartment anymore. He wouldn’t understand. “I just love animals,” I said. “Almost as much as Hitler did.”

That sudden, shocking insertion of Hitler—and later in the novel, Pol Pot, as well as passing desires to lose a leg or be robbed—does more than just reveal an uncomfortably racist old woman, though Mathea is that. It’s a stabbing attempt at standing out and being noticed, at saying and doing something unexpected. Willing herself to the grocery store or mailbox is an effort, but in the privacy and safety of her own voice she can come as close to real action as she ever gets. Thinking of Hans Christian Anderson, Mathea says, “I think he also said action is all that gives life meaning, and today I’ve decided I’ll wear Epsilon’s wristwatch.” It’s hardly an action, hardly even a decision, and it is far less disruptive than the casual, chatty mention of Hitler.

Her voice, internally if not in public speech, strains like a tongue to connect with something and to make itself heard. Epsilon, her husband, draws his identity from staying at work into old age despite Mathea’s constant requests for him to retire, and by rereading editions of the Statistical Yearbook over a century old. He takes comfort in knowing he’s eating the same meals and experiencing the same life, more or less, as everyone else in Norway. But Mathea, who has never worked outside the home apart from a single unsuccessful attempt and despite Epsilon’s encouragement to do so, struggles between the desire to remain invisible and the urge to stand out. It’s a battle raging quietly inside her, sneaking out when she attempts to write the confirmational phrase “I alone am Mathea” but instead puts “I Mathea am alone” on the page. Even her own voice, that slippery tongue, escapes her control when she allows it to reach outside her head.

It’s tempting to ask how much of Mathea’s character—the contradictory desires to blend in and stand out, the occasional toss of a grenade from behind a carefully built wall—is national, a reflection of Norwegian culture. Clearly The Faster I Walk, The Smaller I Am spoke to its original audience, because it won the Tarjei Vesaas prize awarded by the Norwegian Authors’ Union. Certainly there are similarities of philosophy and voice to other Norwegian fiction, by Knut Hamsun or Per Petterson or some of the other very few, far from representative translations I’ve read, and it’s tempting to make something of that. But I fear that makes me a bit of a grasping tongue myself, looking for moorings I don’t know nearly enough about Norway to make; perhaps that’s the risky temptation of reading any translation and taking it as representative of the language or culture that spawned it.

It’s equally tempting to consider Skomsvold’s novel alongside other short, sharp novels of aging, because that’s a favorite subgenre of mine, especially such works as Thea Astley’s Coda, Lars Gustafsson’s Death of A Beekeeper, Gustaf Sobin’s The Fly-Truffler, Norman Lock’s The Long Rowing Unto Morning, and Michael Kimball’s Us. Certainly The Faster I Walk deserves to stand in that group, but I’m left wondering—in a curious rather than critical way—about the significance of Kjersti Skomsvold writing her novel near the age of thirty while those others were written by authors further along in life (some further along than others). There’s a distance to Mathea’s story, an abstraction perhaps, that makes her at times feel like a projection of what aging might be, of what one might think about late in life, rather than the first hand awareness so rich in those other novels. On the other hand, I may have looked for that difference simply because I knew Skomsvold is younger—perhaps I’m grasping, like Mathea herself, to moor my preformed ideas as much as when I ask what is distinctly Norwegian about the novel. Whatever the case, that difference is worth considering, perhaps, but in no way a problem. If anything, it’s a confirmation of one of the story’s central questions: should we measure a life by how much it is like or how much it is unlike all others, and what does that make the individual work of life—or literature—worth in the end?

Kjersti A. Skomsvold was born in 1979 in Oslo. The Faster I Walk, the Smaller I Am is her first novel.

Kerri A. Pierce is a translator focusing on German, Danish, Dutch, Portuguese, Spanish, Norwegian, and Swedish. She is the translator of Lars Svendsen’s A Philosophy of Evil, Mela Hartwig’s Am I a Redundant Human Being?, and other novels.

Steve Himmer is the Editor here at Necessary Fiction. He is the author of the novel The Bee-Loud Glade (Atticus Books, 2011) and his short fiction has been published in various journals such as Monkeybicycle, PANK, The Los Angeles Review, Emprise Review and others.