The Fallback Plan by Leigh Stein 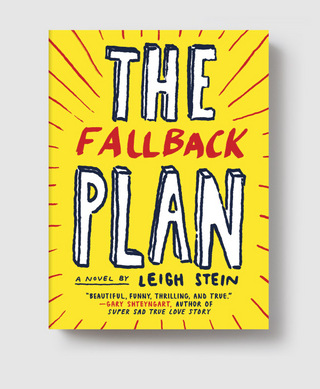 Everyone knows that “adulthood” doesn’t magically become a reality on a person’s 18th birthday, despite the instant legal right to claim the term “adult.” Instead, adulthood comes upon a person in incremental bouts of awareness and experience. There are obviously marker-events that provide good hints—sexual maturity, high school and college graduation, first jobs, marriage, children, etc. At some point most people realize that childhood, and especially what it symbolizes, is a thing of the past. Nostalgia often ensues.

But for some, before they have even gotten to many of those marker-events, the adulthood/childhood boundary line looms as a threat, is a moment to be resisted, and even avoided. Literature is filled with narratives that obsess on this frontier territory, and happily so, because the shift from child to adult is a transition with the potential for heartbreak and comedy, for self-definition and self-destruction.

Enter Esther, the narrator of Leigh Stein’s The Fallback Plan. Esther is 22 years old, a recent graduate with a degree in theatre but currently unemployed and living in her parent’s basement. Esther tells us right away that she’s hoping to develop a debilitating illness, something, “incurable, but not disfiguring or painful.” What Esther wants is to be given the right to do nothing, to put her ambition aside, to simply give up. She’s lying, of course, because she doesn’t really want to be sick, nor does she really want to give up, but this first confession and especially the tone with which she delivers it gives away Esther’s real problem—Esther is terrified:

The world seemed so safe and secure, but I knew that at any moment an asteroid could fall on us, or a bomb, summoned by our fear of it, and it wouldn’t matter if we had locked our doors or not. Thousands of miles away, a bus could explode and destroy a mosque and a tourist from San Diego. A polar bear could drown and a teenage girl could lose her feet in a roller coaster accident on the same exact day.

You always heard people say, “I never thought it would happen to me,” so my strategy was to think of it all—terrorist attack, amusement park dismemberment, death by climate change—and use my grim imagination as a preventative measure in the face of the random universe.

Esther is also fairly immature. Her 18th birthday is long past, she has squeaked through her college graduation and there isn’t any real way to put off becoming an adult any longer. So instead of making any decisions, she has concocted a self-imposed limbo-haze of taking drugs, both prescription and otherwise, and watching two loser guy friends play video games.

Luckily for the reader, Esther’s parents force her to get a job as a nanny with some family friends. But this isn’t just an ordinary family. Amy and Nate have recently lost their second child, a baby girl named Annika. They hire Esther to watch their four-year-old daughter May so that Amy can get her life back on track and start painting again.

This combination of grieving-for-a-lost-child-family and refusing-to-grow-up-Esther is tailor-made for the kind of catharsis that Esther is going to need to get herself out of her parents’ basement and back into the real world. Minor incidents transpire. Esther makes mistakes. Amy and Nate reveal secrets. Esther, thankfully, gets a glimpse of real trauma.

Stein takes a risk with The Fallback Plan in the sense that she uses a fairly unsympathetic first-person narrator to tell a story that belongs to two other characters. The actual events of Esther’s own story during the summer in question aren’t likely to garner her much sympathy, and yet what happened to Nate and Amy and how it affects their lives and marriage belongs to that category of events for which most people will have instant sympathy. So the book’s power—and its success—hinges on Stein’s demonstration of how Amy and Nate’s story works to transform Esther.

That transformation has definite generational boundaries. The Fallback Plan gives voice to the specific anxiety and experience of Generation Y, sometimes called The Peter Pan Generation. Stein perfectly captures the self-protective ironic mode of expression so commonly used by young Americans born around 1985. At times, especially for an older reader, this mode becomes alienating, becomes a reason to dismiss Esther’s experience and even her worldview. But Stein is also careful to reveal the frustration and very real disgust that lies behind that irony:

Apparently, no one ever grew up to be noble and brave and wise. Apparently, this was just a lie perpetuated by children’s book authors. Thanks, Frances Hodgson Burnett! High five, Louisa May Alcott! Now, at twenty-two, I finally knew the truth:

In another twenty years I would still be depressed and apathetic. I would still be waiting for that turning point, the one that comes in books and plays, where the hero has to step up and risk it all. Apparently, in life, there is no such thing. In another twenty years I would just be a heavier, more nearsighted, more clumsy version of the girl I was now, except that I wouldn’t be allowed to read Teen Vogue, because I would be seen as either mentally ill or as a pedophilic lesbian.

Apathy is hard to root for, but anger is something most people will understand. So when Esther finally gets angry, when she drops the blasé and the irony and figures out that some of the people around her haven’t managed to do the right kind of growing up despite the years they may have on her, The Fallback Plan sheds its generational limitations and becomes a coming-of-age novel that doesn’t just comment on the narrator’s specific generation, but on the greater culture.

Aside from this subtle social critique where the novel’s serious side finally lands to rest, The Fallback Plan is quite funny. Esther may be depressed, but she has a gift of clever retort and at her most self-obsessed, she is hilariously delusional. It isn’t easy to write humor into an otherwise serious book, but Stein does this with apparent ease. The result is a satisfying mixture of comedy and poignant revelation.

Leigh Stein is a former New Yorker staffer and frequent contributor to its “Book Bench” blog, her poetry has been published in numerous journals, been nominated for a Pushcart Prize, and earned her Poets & Writers Magazine’s Amy Award. Her book of poetry Dispatch from the Future is forthcoming from Melville House in Summer 2012. She lives in Brooklyn.