The Disintegrations by Alistair McCartney 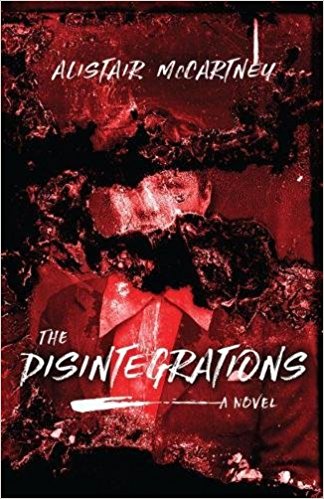 From the opening pages of The Disintegrations, the narrator asserts that he “knows nothing about death, absolutely nothing,” yet what follows is a sweeping chronicle of death that suggests a journey from ignorance to some hazy understanding of the afterlife. No greater knowledge of death is captured here, as language’s inability to decipher the void remains, but perhaps in Alistair McCartney’s second novel we become privy to a vague gleaning of the detritus or disintegrations of death itself.

In the epigraph for the chapter titled “An Encounter,” the narrator explains, “I want to disintegrate the line between life and death…until that line no longer exists.” This is one of the prime thematic statements under which Alistair McCartney operates in The Disintegrations, a work that sees him—like some old Celtic pagan—attempt to thin the veil between the dead and the living.

An obsessive work, The Disintegrations finds McCartney’s narrator and/or McCartney—like many blurred lines in this book, the line between narrator and author is malleable—endeavoring to turn the abstraction of death into something concrete and tactile. The book succeeds in shining a little light on death’s perplexities, and McCartney’s exhaustive, morbid tour is something to behold as he investigates the termination of life and his own keen philosophies and attitudes on the subject.

The book, which shrewdly avoids any formal genre categorization (part fiction, part non-fiction), finds its narrative locus at The Holy Cross Cemetery in Culver City, California. McCartney pivots often from this macabre West Los Angeles locale to tell his veritable ghost stories. A constant visitor to the cemetery’s grounds, the narrator haunts the graves of various Hollywood celebrities: Sharon Tate, Bela Lugosi, John Candy, and Rita Hayworth all call the cemetery home. The narrator admires the solitude and quietude of the dead, and seems to take more comfort in hanging around the dead than the circle of living persons who inhabit his life. His self-imposed alienation is apparent throughout the book, and his social interactions—if not immediately—become strained and awkward to say the least.

McCartney’s narrative tone is conversational throughout, taking the reader by the hand at times in an attempt to bring us closer to the subject. In addition, his perfectly objective and removed style gives him the proper tools with which to investigate the void. With an unbiased hand and a penchant for making death ceremoniously unsentimental, McCartney opens up tales of the dead with a detached glee.

The chapter “The California Section” recounts all the grisly deaths around California that are featured in the Los Angeles Times’s editorial section of the same name. Chronicling the darker underbelly of Los Angeles via reports of homeless men being set on fire and boys falling into ravines, it paints a generally paradisiacal city like Los Angeles with vague levels of dread, ala Joan Didion. It is at this point that we begin to realize The Disintegrations is not only a book of death, but of location.

In the passage titled “Eun Kang and the Ocean,” the narrator explores the story of a pregnant woman murdered within the narrator’s own neighborhood of Venice, California. In the book, Venice is not the place of the historic boardwalk, skateboard culture, homeless savant chess players, or muscle beach, but a place of witch-like residents (Sandra Golvin) and murders of everyday people (Eun Kang).

McCartney’s focus also alternates to his native Australia, for stories of newborn nephews passing away and deranged serial killer couples. In “Cooper’s Story,” a chapter devoted to the death of his nephew, McCartney details Cooper’s tragic demise with the same direct, matter of fact approach that heavily characterizes the book:

Cooper turned blue. He was the first child of my sister Jeannine and her husband, Paul. He was born on December 16, 1996, and he died on December 23, 1996. Born on a Monday, died the following Monday. He lived for a week, so there’s very little to tell. How much can happen to someone who’s only around for seven days?

The deaths of neighbors, coworkers, colleagues, acquaintances, family members, and others are told in the novel, but the book also focuses on the narrator’s or McCartney’s thoughts about his own mortality. He ruminates on how he would like to be prepared for the afterlife, from the method of bodily disposal, to the appropriate hearse. Immortality also stalks the narrator’s mind, as in the chapter titled “Immortality:”

Alistair McCartney never tries to skirt the anxiety of death, or prolong its inevitability in his impeccably crafted second novel. There are no grandiose statements, no canonical declarations on the subject of death. Instead, McCartney opts for an almost reportage like approach, reporting live from the peripheries and various hemispheres of death, but never too close. Only as close as language will allow him, and for most, that’s close enough.

Alistair McCartney is the author of The End of the World Book, a finalist for the PEN USA Literary Award in Fiction. He teaches creative writing at Antioch University Los Angeles. Find him here: www.alistairmccartney.com

Michael Browne is a writer and publicist based in Los Angeles. His work has recently appeared in Entropy and Westwind. Michael is also an editor at Angel City Review and can be found on Twitter here: @BrowneLaurence.