The Death of Murat Idrissi by Tommy Wieringa 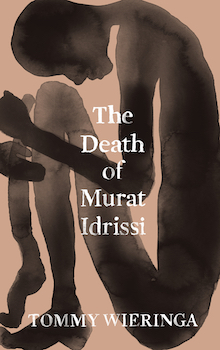 The title of Tommy Wieringa’s novel, The Death of Murat Idrissi, reveals its tragic ending: Murat, the Moroccan protagonist, will die. You know this. Yet you wait in heightened anticipation for what will happen next. The novel reads like a short story but packs such a punch that the reader is left gasping, overwhelmed by dark moments introduced casually. You will need an atlas to follow along and a globe to understand how these geographies are real.

Set in a post-9/11 world, Wieringa refers indirectly to President George W. Bush as “the most powerful man in the world” whose statements on the attack “broke the world … into we over here and them over there.” As the line separating Africa from the West becomes sharper, Murat’s possibilities diminish in Morocco. The border represented by the Strait of Gibraltar becomes a door that swings in one direction only.

Ilham, a teenager born and raised in the Netherlands who immigrated with her parents to Morocco, feels the geopolitical divide reverberating between the haves and have-nots. After she and her friend Thouraya are rescued from a car accident by a young man named Saleh, they agree to repay him by going along with his extremely risky plan to stow Murat in their trunk and smuggle him across the sea to Spain.

When the group visits Murat’s humble shelter, his ancient mother shares the few delicacies she can offer. Saleh watches this ceremony solemnly, explaining to the girls that “[a] Moroccan will share even the last of his food with you. No matter how poor he is.” Saleh’s observation solidifies Ilham’s guilt, and her burden of conflict is woven throughout the remainder of the book.

Everyone but Ilham agrees to the plan readily. Murat climbs into the trunk to demonstrate how easily he fits. But it is Murat’s mother who seals their different fates when she grasps Ilham at the last minute and begs her to understand all that is at stake if she does not agree to help Murat — which, in the end, she does. As much as Ilham repudiates her new Moroccan environment, the tug of local traditions finally convinces her that she must help this stranger whom she would never have met but for mere circumstance.

Later, when Ilham and Thouraya realize they’ve been swindled by Saleh, they attempt to reach the Netherlands on their own. (Murat perishes in the trunk of their car, as Saleh knew he would.) After making it safely past customs in Spain, they meet a group of young men, students on holiday who are taking it easy. The contrast between the young women on the run and these carefree students is startling. Desperate to conceal the body hidden in their trunk, the girls flirt with the students, hoping to find a ticket out of their predicament. Ilham discovers that one of the young men, Noureddine, who is educated and wealthy enough to take them out, is actually from Morocco like themselves. Though she is disgusted by being deceived, the insight strangely comforts her: “Even though they were both born and raised in the Netherlands, not even their fervour and ambition could make them anything more than Moroccans.” She envisions Noureddine’s future, one where he “would shake off his friends … then his assimilation would be complete.”

The tension between men and women provides another lens for understanding the characters. The farther Ilham and Thouraya travel from restrictive Morocco, the more their dynamics with their male counterparts shift. Ilham observes the subtle interplay amongst the group of young men, noting, “That’s the way it works … their earnest little game … it determines their position in the group.” She astutely recognizes that behind their seemingly harmless banter, a hierarchy is being established. A third-person narrator occasionally takes over, allowing the reader to catch a glimpse into the boys’ minds: “They want it, the girls do, they just don’t know it yet.” This disturbing line is also realistic, as it shows how feckless the young men become in a context of comfort and choices.

And just like that: Murat dies. By casually tossing off the death scene, Wieringa captures how nonchalant they’ve all become. Saleh disappears. Murat’s indirect murder was a business transaction — nothing more, nothing less.

By the novel’s conclusion, what exactly have the girls accomplished? Their ambiguous escape, while tainted, feels victorious. By eliminating an inconvenient dead body, have they also rid themselves of their Moroccan inheritance, of which they’re ashamed? Would their actions have been less admirable if they had been men? Upper-class? Dutch? The author leaves the reader to decide, exploring the details that determine who occupies the top rung in any social hierarchy and who is delivered into darkness, be it a shanty or the car boot that was Murat’s final resting place. When the girls open the trunk, it’s clear that Murat isn’t resting at all. Twisted and contorted into his last pose, he seems to be fighting for a life.

The author of four novels, Tommy Wieringa was born in 1967 and grew up partly in the Netherlands and partly in the tropics. His fiction has been shortlisted for the International IMPAC Dublin Literary Award and the Oxford/Weidenfeld Prize, and has won Holland’s Libris Literature Prize.

Sam Garrett has translated some fifty novels and works of nonfiction. He has won prizes and appeared on shortlists for some of the world’s most prestigious literary awards, and is the only translator to have twice won the British Society of Authors’ Vondel Prize for Dutch-English translation.

Tina Choi, a graduate of Western Washington University, has taught in Seattle and on the Oregon Coast. She currently writes and lives with her husband in northeastern Oregon.