The Dark by Sergio Chejfec 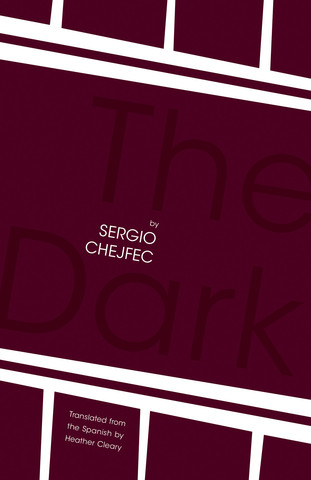 I’ve read many novels in which the narrator reveals him- (or her-) self to be entirely unreliable. In the right hands, this fairly common literary device creates a scenario in which readers can play detective and attempt to spot the inconsistencies in the story as it is being told. A well-executed unreliable narrator allows for subtext, a second story which is fashioned from readers’ opinions and emotional history as much as from the author’s imagination. The two key features in the telling of this kind of story are subtlety and inference.

It has always unsettled me that geography does not change with time, with the changes that take place within it, within us. We retain something immaterial, similar to that something retained by geography, also immaterial. And yet, though it remains unaltered, geography is the measure of change. Just as happens with the temperature of a body, the trace it retains of its former heat allows it to continue being itself, yet this trace marks a difference. Bodies are and are not; they are at once more and less than. The same is true of geography, that is, it’s unruly. I’ve read many novels in which the protagonist returns to a forgotten place. It doesn’t matter whether the landscape is urban or rural. The slope of the hills won’t have changed, but the green will be different, or the mountains, if they’ve kept their color, will disappoint with domesticated angles, not nearly as steep as remembered. The same goes for the city: the old corner has been restored, destroyed, abandoned, and so on. The protagonist is left with a residue, a mixture of reality and oblivion, something elusive drawn from his surroundings, the contradictory signs of which, along with his disappointment and resolve, allow him to recognize places. And so some characters, in order to uncover what lies hidden, latch on to the superficial.

And so we are introduced to the protagonist of Sergio Chejfec’s novel The Dark (his third to be translated into English and published by Open Letter Books). He is in many ways the typical Chejfec narrator: male, middle-aged, nameless and loquacious. He possesses conversational ticks and some mild neurosis. He walks. In the case of The Dark, the narrator has a very specific obsession—a young factory girl named Delia with whom he years ago had a brief affair. The two would meet after her shift at the factory and walk the city until nightfall. Then, they would go to an abandoned shack in a field to have sex. He would walk Delia home afterward or, as more often happened, they would continue wandering the streets together until dawn.

Like the narrator of another Chejfec novel The Planets, the narrator of The Dark lives in a world that is a projection of his inner life. Facts are something of an inconvenience. In The Planets the narrator deals with a flood of memories that are triggered by his belief, one he freely admits has no basis in reality, that a childhood friend who had been missing for years has only recently been killed in an explosion reported in the day’s news. It is a delusion, but as delusions go relatively benign. If there is a menacing undertone, it comes from the period in which the novel is set: during Argentina’s Dirty War. The narrator, himself, is harmless. His delusion is also a trigger allowing him to finally confront the loss of his friend.

The narrator of The Dark is also re-visiting the past. He describes Delia, their time together and apart, in minute details. Yet despite all this demonstrated attention to detail, the more he talks the more we question his story and intentions. Delia is barely a person – his assumptions of who she is or what she believes are entirely attuned to his needs and desires. Often, he deals with her as a plurality, lumping her together with her fellow factory workers. Some of the funniest sections of the book are where he describes Delia and her co-workers as the “Proletariat,” going on long tangential diatribes about their condition as workers and their collective mentality. He discusses patterns of behavior as if he were an anthropologist describing a primitive civilization. The humor is not in what he says (which is casually condescending) but in the ridiculousness of the conclusions he puts forward as fact and revelation. He is something of a modern day Polonius—and the act of over-complication provides him with a way of disassociating himself from his very real connection to Delia. It is not surprising when we learn that the narrator no longer leaves his apartment.

I’ve read more than one novel in which misfortune helps someone’s bad luck along; I mean, there are people in these novels whose luck is worse than they deserve. This excess of adversity, like a surplus of evil, frees one’s character of contradictions: the innocent become more innocent, the conniving more conniving, the lazy man is driven to the heights of laziness. Nuances and traits are, in the end, redundant: to give a simple example, it is of little use to the generous man to be uniquely benevolent if he ultimately turns out to be at the mercy of his luck. This is all to say that what happens in novels is deceptive. This story probably should have been much more awful than it seems, and is certainly much truer than it makes itself out to be, because the one thing I know is that, from the beginning, I felt myself involved in a tragedy without a statute of limitations.

Chejfec really excels in these long, one-sided dialogues which both obscure and incrementally reveal the truth of the situations and people being described. This particular narrator prefaces his thoughts by referring to the “many novels” he has read. He will also repeat or re-edit himself, using phrases like: “I should say” or “what I meant” and “as I’ve mentioned.” His story meanders, double backs on and crosses over itself—creating a narrative path as convoluted as the geographic one he and Delia follow on their nocturnal walks. He leaves clues regarding his duplicity (as in the passages quoted in this review). Heather Cleary does an excellent job of establishing the English rhythm of the text, the twists and turns of which are at times difficult to follow. Yet, the beauty of the prose rests in its complexity. When the revelations happen they are that much more jolting, often dropped on the reader with a directness that is at odds with the rest of the narrative.

The compulsion to explore mental and physical geography, and the resulting cognitive data-dump is a Chejfec trademark. Across his three English-available titles, regardless of their thematic differences, Chejfec’s narrators aren’t just enamored with the sound of their own voices, they are addicted to the distraction inherent in the act of narrative. Their need for release is often so great that they don’t always pay attention to what they are saying. And it’s in those slips that the reader discovers the truth scattered throughout the text like so many needles in a haystack. Ambiguous, messy, rife with misdirections—Chejfec novels are all these things.

But The Dark adds a new dimension to the dual themes of geography and streaming consciousness that Chejfec loves. Here is a narrator who is also, at long last, a character. One whose moral compass points somewhere; who has stopped moving; who has instead restricted himself to a narrow physical and mental space; who no longer goes outside. Here is narrator left alone. Consigned, as it were, to the dark.

Sergio Chejfec, originally from Argentina, has published numerous works of fiction, poetry, and essays. Among his grants and prizes, he has received fellowships from the Civitella Ranieri Foundation in 2007 and the John Simon Guggenheim Foundation in 2000. His books have been translated into French, German, and Portuguese. He teaches in the Creative Writing in Spanish Program at NYU.

Heather Cleary Wolfgang completed both her B.A. and M.A. degrees in Comparative Literature at New York University. Her translations have appeared in various cultural journals such as the Borda Gardens (Cuernavaca), The Literary Review and New York Tyrant. Her translation of Sergio Chejfec’s The Planets was a finalist for the 2012 Best Translated Book Award. She is currently pursuing a PhD at Columbia University and recently co-founded the digital, bilingual Buenos Aires Review.

Tara Olmsted was born on the East Coast of the United States, where she spends most of her waking hours with her face in a book. After three decades of reading English literature she decided to see what the rest of the world had to offer. What she found changed her life. She blogs about international & translated literature at BookSexyReview.com.